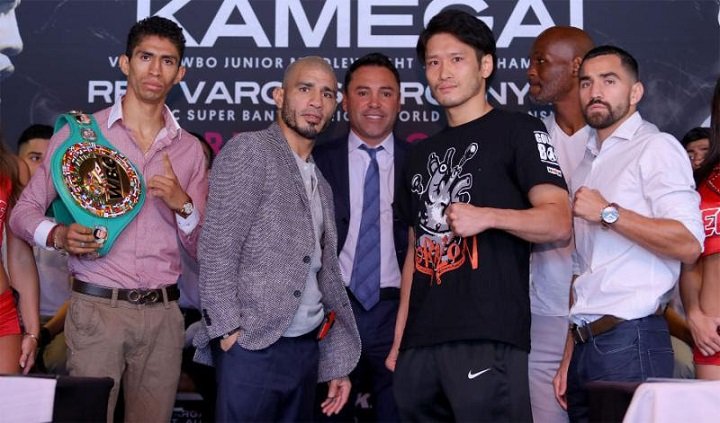 Miguel Cotto (40-5, 33 KOs), the only four-division world champion in Puerto Rico’s rich boxing history, and Japanese 154-pound contender Yoshihiro “El Maestrito” Kamegai (27-3-2, 24 KOs) hosted their final press conference today ahead of their 12-round fight for the vacant WBO World Junior Middleweight title in the main event of an exciting action-packed card this Saturday, August 26 at the StubHub Center in Carson, Calif. and televised live on HBO World Championship Boxing® beginning at 9:45 p.m. ET/PT.

In the co-main event of the HBO telecast, WBC Super Bantamweight champion Rey Vargas (29-0, 22 KOs) of Mexico City, Mexico will make the first defense of his title against Santa Ana, California’s Ronny Rios (28-1, 13 KOs) in a scheduled 12-round fight. The card is fully stacked with Golden Boy talent, including Emilio Sanchez, Joet Gonzalez, Tenochtitlan “T-Dog” Nava, Alexis Rocha, among others.

Below is what participants of HBO World Championship Boxing® had to say.

MIGUEL COTTO, Four-Division World Champion:
“It’s a pleasure for me to be here. We’ve been enjoying every session at the gym. I’ve been doing my work as hard as I can. We’re ready. We are ready for the fight, and I’m happy to be back. Thank you everyone for being here. We’re going to do our best this Saturday, and the winners will be fans all over the world.”

FREDDIE ROACH, Trainer of Miguel Cotto:
“We had a really good training camp, a little longer than usual. He [Cotto] had a little bit of layoff previously, but camp went well. We watched a lot of film on our opponent [Kamegai]. We have a really great strategy, and it will be an action packed fight. Miguel is 100 percent ready. It was the best training camp we’ve had yet. We’ll see you Saturday. Thank you.”

YOSHIHIRO “MAESTRITO” KAMEGAI, Junior Middleweight Contender:
“Hello everyone I’m Yoshihiro Kamegai from Japan. I want to thank HBO, Golden Boy, Teiken Promotions, the WBO, Miguel Promotions-everyone who made this event possible. I’m extremely pleased to be back at StubHub, where a lot of legendary battles have been fought. I’m looking forward to it. I’m extremely pleased to be fighting for the WBO title belt held by great champions like Oscar De La Hoya, Marco Antonio Barrera, and I’m looking forward to fighting a great legendary champion like Miguel Cotto.”

SENDAI TANAKA, Trainer to Yoshihiro Kamegai:
“I want to thank HBO, Golden Boy Promotions, and Teiken Promotions. Thank you especially to Miguel Cotto for accepting Kamegai as an opponent. Cotto is a legendary fighter, very complete, worldwide one of the best. Kamegai is very excited and happy to step into the ring with a fighter like Miguel Cotto. And you know his style. He likes to train, to punch and take punches. And he’s very excited to get in there and give you guys a great fight. That’s why he’ll throw punches until victory comes, always.

REY VARGAS, WBC Super Bantamweight Champion:
“One of the biggest fights that I got was when I got to go to England to win the title. For me, it was double the effort since I had to go over there to get it [the WBC title]. I got it. I won it. And now I’m defending it against a great fighter. I like great fights. I like great challenges, and I will prove that I am a great champion. I’m ready to fight the big fights in the big leagues, and I will do it against a great fighter.”

“That makes us happy and motivates us more because we’re at the big leagues and we want to show that we are champions. I’m happy to be on this card. I’d like to thank HBO for the opportunity to prove to people that I’m a good champion. I’m sure that you’re going to watch an exciting fight this Saturday, so please don’t miss it.”

RONNY RIOS, Super Bantamweight Contender:
“I want to thank Golden Boy for putting this event together. It means a great deal. I want to say something because everyone is bringing up the topic of real fights. I want to thank HBO for putting up a real card. If you want to watch real fights, tune in to HBO. Thank you to Rey Vargas for accepting this fight. I want to thank my coach, who has been there through thick and thin. We’re here and we’ll make the most of our opportunity. We’re ready for this. Tune in on Saturday night for a great night and a great night of boxing.”

OSCAR DE LA HOYA, CEO & Chairman of Golden Boy Promotions:
“We are extremely happy and thrilled that Miguel Cotto will fighting for the WBO world title at the StubHub Center. Cotto has been and is an amazing champion in the sport of boxing. He is Puerto Rico’s first four-division champion. He will be fighting against someone who is exciting to watch and has been in several Fight of the Year candidates, one against Jesus Soto Karass.

“This fight has the makings to be another candidate for Fight of the Year. I want to thank our co-promoters, Miguel Cotto Promotions. It’s always a pleasure to be working with this team. We are on a vision to bring boxing back to Puerto Rico, so there is a tremendous opportunity for Miguel Cotto to crown himself the only world champion in Puerto Rico today, so this is obviously a huge deal.

“This is obviously a big deal for Yoshihiro Kamegai, who will be fighting for a world title against a legend like Miguel Cotto. It’s a great motivation for him, so I know that he’s in tremendous shape and ready to go, and we know for a fact that this main event will be one that you do not want to miss.

“We also have a tremendous co-main event which will be a 12-round fight for the WBC Super Bantamweight World Championship. It’s Rey Vargas, who will be up against Ronny Rios, who is a tremendous fighter. We really are looking forward to this fight. It is a very important fight for not only Mexico, but also for here in the greater Los Angeles area.

“I want to also thank Teiken Promotions. Mr. Honda has been incredible working with us. It’s always a pleasure working with Teiken Promotions, where we do have several up and coming and ex world champions and current world champions that we have working with Honda. Also, Promociones Del Pueblo. Thank you for the opportunity. They are one of the best promoters in Mexico. I also want to thank HBO. They are the best in televising the bets boxing events. HBO has been a tremendous partner.”

TONY WALKER, Vice President at HBO Sports:
“We really appreciate you being here and talking about boxing, and really about what we are going to have Saturday night. Cotto will make his 23
rd appearance on HBO, and through his combination of skill and style he’s done well in every broadcast he’s been on. But Saturday night he’ll have to bring all those skills because Kamegai has put in his own work and has his own career aspirations.”

MARTHA SHEN-URQUIDEZ from California State Athletic Commission:
“I was so happy when I heard that this fight was scheduled for August 26 at StubHub, one of the great venues for boxing in California. It was a pleasure to hear that it was going to be this fight on this particular day, so that boxing aficionados and lovers like me have a great boxing match, a great undercard, and great main event to watch on Saturday, August 26.

“I have seen Miguel Cotto and Yoshihiro Kamegai fight on separate occasions, and it is always a pleasure to see them fight, and it will be an even bigger pleasure to see the fight against each other. I am very grateful for Golden Boy, for Mr. Honda, for StubHub Center and for HBO for bringing this an event of this caliber to Southern California again. I’m always grateful for Eric Gomez, Oscar De La Hoya, Bernard Hopkins and his team. We wish everyone a safe and successful event.”

FRANCISCO VALCARCEL, President of the World Boxing Organization (WBO):
“It’s a great pleasure for me to be here. I remember when Oscar told me that he wanted to be the WBO 160-pound champion. Oscar was given the opportunity to be a champion in three different divisions, and now we will give Cotto the same opportunity, who won the WBO belts in the 140 and 147 divisions. Good luck to everybody. Congratulations to Oscar De La Hoy and his team. Con-gratulations on a big show.”

BOB YALEN, Technical Director at the World Boxing Council (WBC)
“Thank you everybody for coming today. One thing that hasn’t been said yet is that this is a fight fans’ fight card. This is real fight card. You’ve got a future hall of famer against one of the best fighters that Japan has ever produced. You’re going to have a WBC title fight that I think will steal the fight card.”

“You’ve got Rey Vargas against an undefeated challenger against a once-defeated challenger, and you’re going to see a great, great fighter for a WBC title. I want to thank Golden Boy, StubHub, and HBO. It will be a great night of boxing. Everyone is in store for a treat. Keep an eye on this fight card.”

BRENDAN HANNAN, Vice President, Marketing, Communications and Digital for Stub-Hub Center:
“We are thrilled on Saturday to welcome the Cotto-Kamegai fight. We are thrilled to work with HBO and Golden Boy Promotions to bring this fight to you. We truly believe that StubHub is the premiere outdoor boxing venue in the United States. Like Oscar said, we have very few tickets remaining. We look forward to seeing everyone on Saturday. Enjoy the fights this Saturday.”

Cotto vs. Kamegai, a 12-round fight for the vacant WBO World Junior Middleweight Championship, is presented by Golden Boy Promotions and Miguel Cotto Promotions in association with Teiken Promotions and sponsored by Tecate “BORN BOLD” and Casa Mexico Tequila. Rey Vargas vs. Ronny Rios is a 12-round world championship fight for the WBC Super Bantamweight Title, and is presented by Golden Boy Promotions in association with Promociones del Pueblo. The event will take place Saturday, August 26 at the StubHub Center in Carson, Calif. and will be televised live on HBO World Championship Boxing® beginning at 9:45 p.m. ET/PT. The livestream portion will begin at approximately 4:45 p.m. ET/1:45 p.m. PT through approximately 9:45 p.m. ET/ 6:45 p.m. PT on RingTV.com. 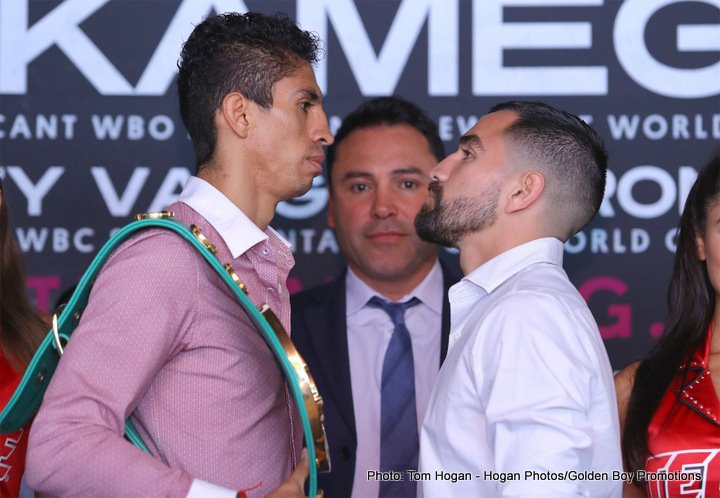 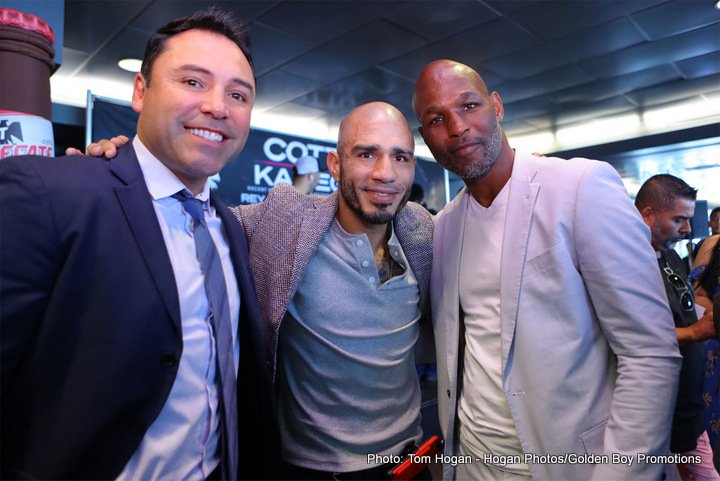 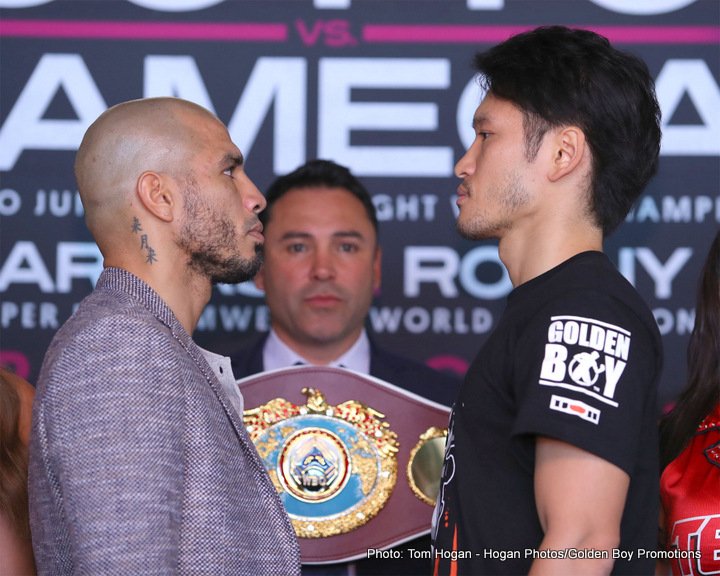 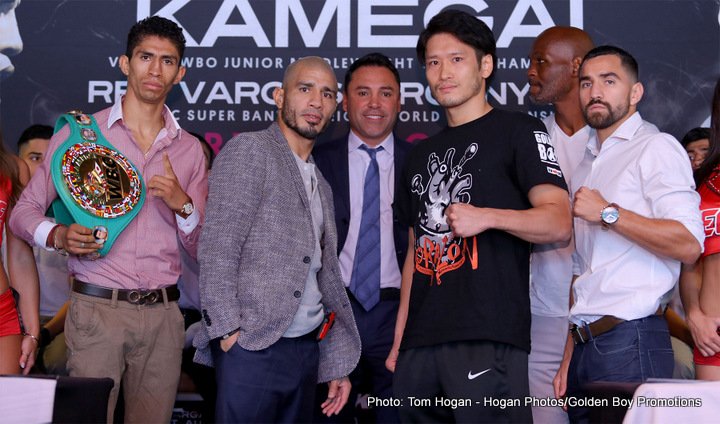 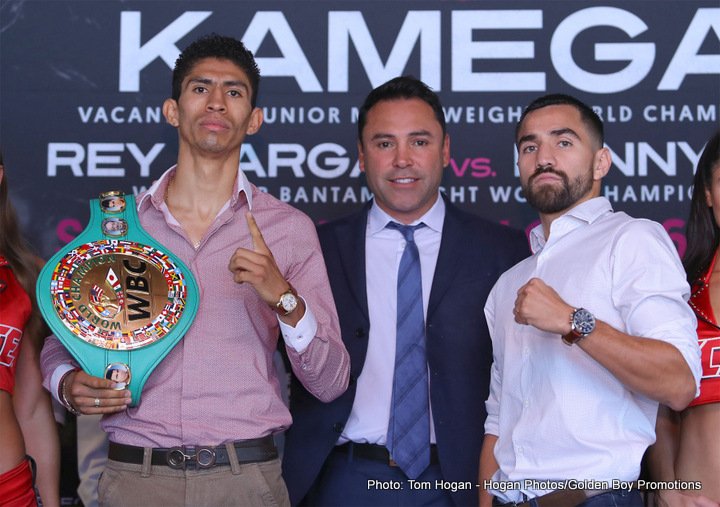 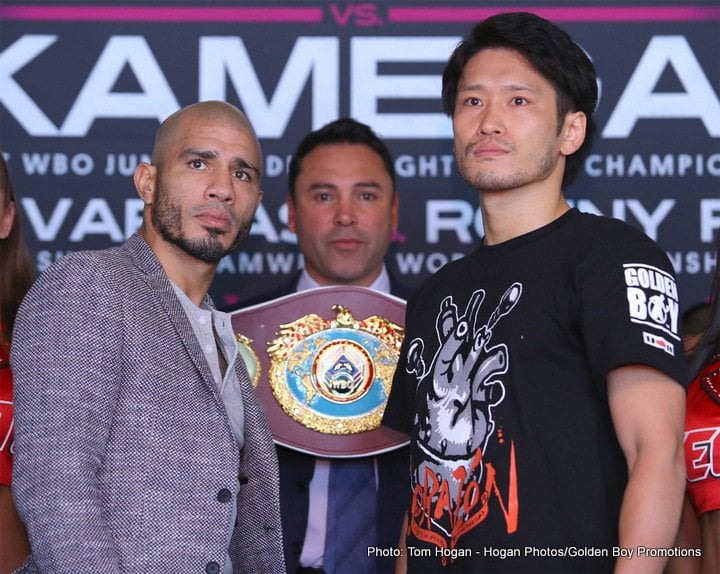 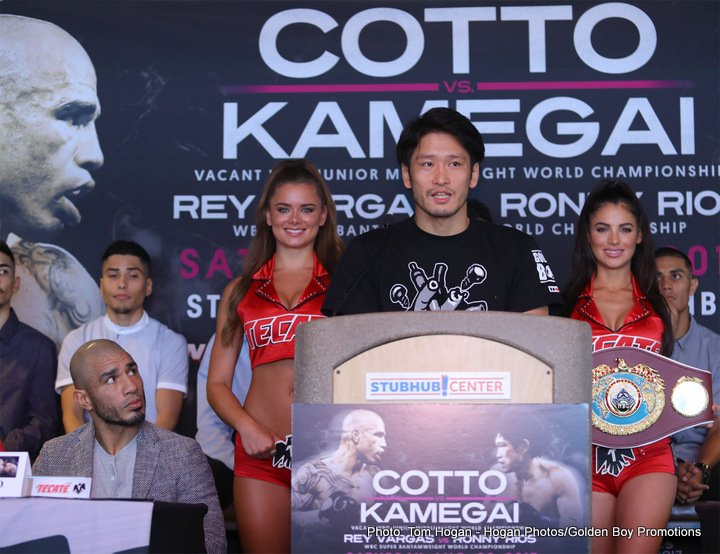 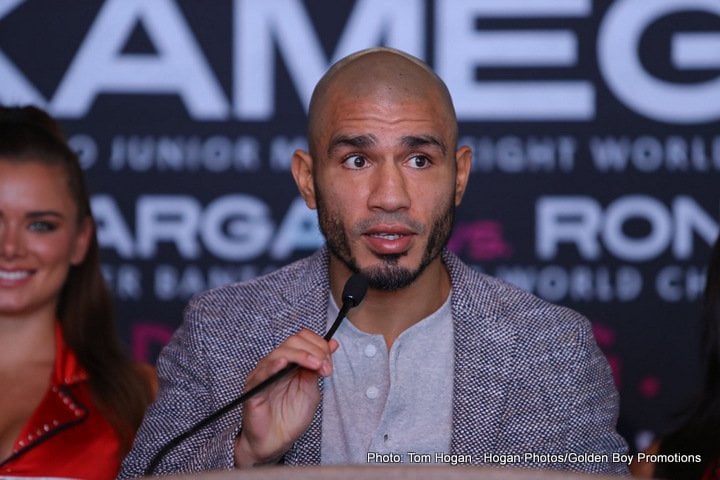