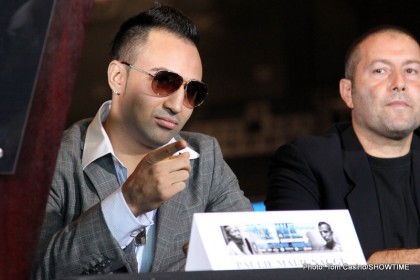 “If the Floyd talk is serious you gotta test the waters against a decently recognisable, respectable name right? My team’s phone will be on,” 36 year old Malignaggi wrote.

It seems as though McGregor – who is taking a break from UFC – will box someone, otherwise why go to the trouble of getting a license (his application for a license to box in the state of Nevada proved unsuccessful). Malignaggi, 36-7(7) certainly is a recognisable and respectable name, but would the former champ who has been in with the likes of Miguel Cotto, Amir Khan, Adrien Broner and others be too good and too well seasoned for McGregor in his boxing debut?

If and when (more likely when) McGregor boxes, the interest levels are likely to be pretty high. If he can reel off a couple of impressive enough wins, by KO preferably, this fan interest will only climb. McGregor does seem to seriously want that enormous fight – and enormous payday – with the currently retired “Money” Mayweather, but will Paulie Malignaggi, who last fought back in July of this year and who has won his last three fights, ruin McGregor’s plans by boxing his ears off and beating him in a “tune-up” first?

And already a number of name pro boxers want a piece of him.