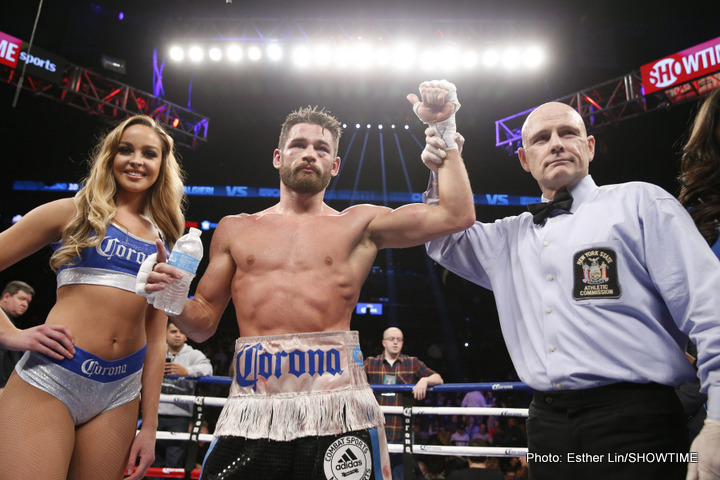 Star Boxing announced this morning that the prodigal son will return home for the first time in over 4 years as Former World Champion Chris Algieri returns to The Paramount on November 30th, making his long-awaited comeback at the venue where it all started. This will be his first fight at the Paramount since Algieri became a national cover story in 2014.

Algieri, who was developed at the famed Star Boxing venue, moved to the big stage and had a career defining, real life “Rocky” story unfold on HBO on June 14th, 2014 at the Barclay’s Center, in Brooklyn, against heavily favored and feared Ruslan Provodnikov (then 23-2 16 KO’s) for the WBO World Championship. After peeling himself off the canvas two times in the opening round, Algieri put on the fight of his life. With one eye virtually closed, the gutsy Algieri fought the rest of the fight in brilliant fashion dominating the defending champion Provodnikov to become the new WBO Super Lightweight World Champion*.

PROMOTER JOE DEGUARDIA WITH, THEN NEWLY CROWNED WORLD CHAMPION, CHRIS ALGIERI AT THE BARCLAYS CENTER IN 2014

The win catapulted the local sensation to international fame. Algieri was awarded a mega-multi-million dollar fight with boxing legend and superstar, Manny Pacquaio. The Pacquiao-Algieri bout took place around the world in Macao, China and was telecast on HBO/Pay Per View. Subsequently, Algieri continued to take the most challenging bouts taking on world class fighters such as Errol Spence Jr and Amir Khan, after the Pacquiao fight.

When asked about his comeback, Chris Algieri stated “I can’t express how happy I am to be back. It has been a long time coming and it is the perfect time to step back into the sport. I am looking forward to returning to the junior welterweight division and win another world title. There are a lot of good fights for me down the line and I can’t wait to be back in the mix on the world stage”.

Promoter Joe DeGuardia stated he believed Algieri would be in the mix right away stating, “I look forward to Chris’ return, especially in the junior welterweight division, where he has never lost a fight. I am confident we will get him another world title fight very soon”.

Algieri had accomplished much in his 24 years leading up to his professional debut. A champion in kickboxing, and an honors graduate of Stony Brook University, receiving a Bachelor of Science Degree in Health Care Management. Algieri also has a Master’s Degree from the New York Institute of Technology. However, Algieri was always seeking a new challenge, and the sweet science was his calling. Algieri caught the eye of Star Boxing promoter, Joe DeGuardia, and he signed with the company in 2011, paving the way for his future success in boxing.

Since Algieri was born, raised and living in Huntington, New York, The Paramount became Algieri’s home. With Star Boxing by his side, Algieri headlined the first “Rockin’ Fights” at The Paramount on November 19, 2011, and never looked back. Over the span of three years, from 2011-2014, Algieri ripped off ten consecutive victories, headlined eight “Rockin’ Fights” and was developed as a top Jr. Welterweight prospect through the critically acclaimed Star Boxing series. During this span at The Paramount, Algieri appeared on NBC Sports and ESPN “Friday Night Fights” while defeating fellow prospects Emanuel Taylor and Jose Alejo as well as former world championship challenger Mike Arnaoutis en route to becoming the World Champion.

Algieri decided a couple of months ago that he was ready to make a comeback and re-signed a promotional agreement with his long-time promoter Joe DeGuardia and Star Boxing. The two agreed it was time to return to the roots of Algieri’s career and give back to the loyal Long Island fans. Therefore, on November 30th, after a two-year layoff, Chris Algieri returns home to the place where it all began, The Paramount. Algieri will headline “Rockin’ Fights” 33 as he begins another march towards a World Championship fight.

Promoter Joe DeGuardia was asked about the decision to bring Algieri back to the Paramount and said, “The ‘Rockin’ Fight’ Series has been a tremendous success and it started with Chris Algieri. When I suggested we have the comeback begin at the Paramount, Chris was on board immediately. We recognize how great the Long Island fans have been and it’s a pleasure to have him back at The Paramount. On November 30th, I expect an electric crowd in a packed arena, so get your tickets while you still can because they won’t last long.”

Algieri echoed those comments, as he stated, “I am thrilled to return to the Paramount where my last successful title run began. The growth of my fanbase has always been an organically grown, grass roots approach; so it feels only right to give back to my hometown fans in this way”.

Information on Algieri’s opponent will be announced later in the week.

GET YOUR TICKETS TO “ROCKIN’ FIGHTS” 33 TODAY!

*If you are interested in becoming a sponsor, please email us at
info@starboxing.com