Heavyweight Derek Chisora (32-12, 23 KOs) looked in excellent shape weighing in at 258.25 lbs during Friday’s weigh-in for his rematch with the oddsmaker’s favorite Kubrat Pulev (29-2, 14 KOs) for Saturday’s match at the O2 Arena in London, England. Pulev weighed 250 lbs and looked ready for war on Saturday.

Chisora’s promoter Eddie Hearn admitted his guy is up against it against the 41-year-old Pulev, but he’d like to see him upset the odds by jumping on the Bulgarian from the outset and pushing a fast pace that he can’t keep up with.

The advice that Hearn has would work for a younger Chisora, but not the 38-year-old that we saw in his last fight against Joseph Parker. Chisora looked exhausted after two rounds, and incapable of pushing a fast pace against the New Zealander.

If Chisora hasn’t worked on his stamina problems in training camp, and there’s no reason to believe that he has, he’ll lose badly to Pulev on Saturday night in their fight on DAZN.

“The problem with the Boris Johnson face is that he was a little bit calmer, and he wasn’t up for a tear-up,” said Eddie Hearn to iFL TV about Chisora wearing a mask for the weigh-in on Friday.

“It’s all good, he’s ready to go. You never know what Derek is going to do, but we know what he’s going to do in the ring, which is to give everything he’s got tomorrow night.

“I know people talk about and he talks about, ‘Yeah, winning-losing.’ Let’s be honest, he [Chisora] needs to win tomorrow night. Pulev looks in great shape, and very confident.

“I think he’s the favorite going in, Kubrat Pulev, but Derek has got to set a fast pace early and make it uncomfortable for him.

“It would be a fourth [consecutive] defeat. He will have lost Joseph Parker, Kubrat Pulev, and Oleksandr Usyk. They’re all top 15 heavyweights, some of them are top five.

“You’re still losing, and if you’re not prepared to drop down a level and fight guys you can beat or aren’t 50-50 fights, then you’ve got to consider and question what you’re doing. I think there’s pressure on Chisora tomorrow night, and I think he must win it.

“I think Derek is a better fighter now [than when he fought David Haye on July 14th, 2012]. If you look at who he’s been competing against, even in defeat. When he boxed Dillian Whyte, the first fight was one of the best I’ve ever seen. It was very close,” said Hearn. 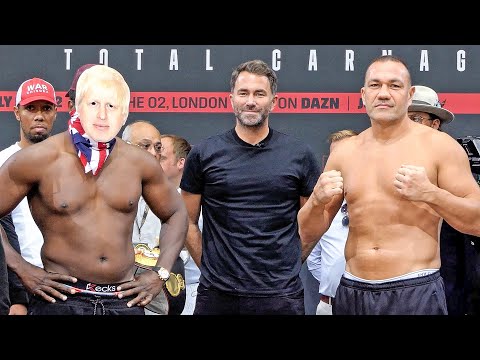