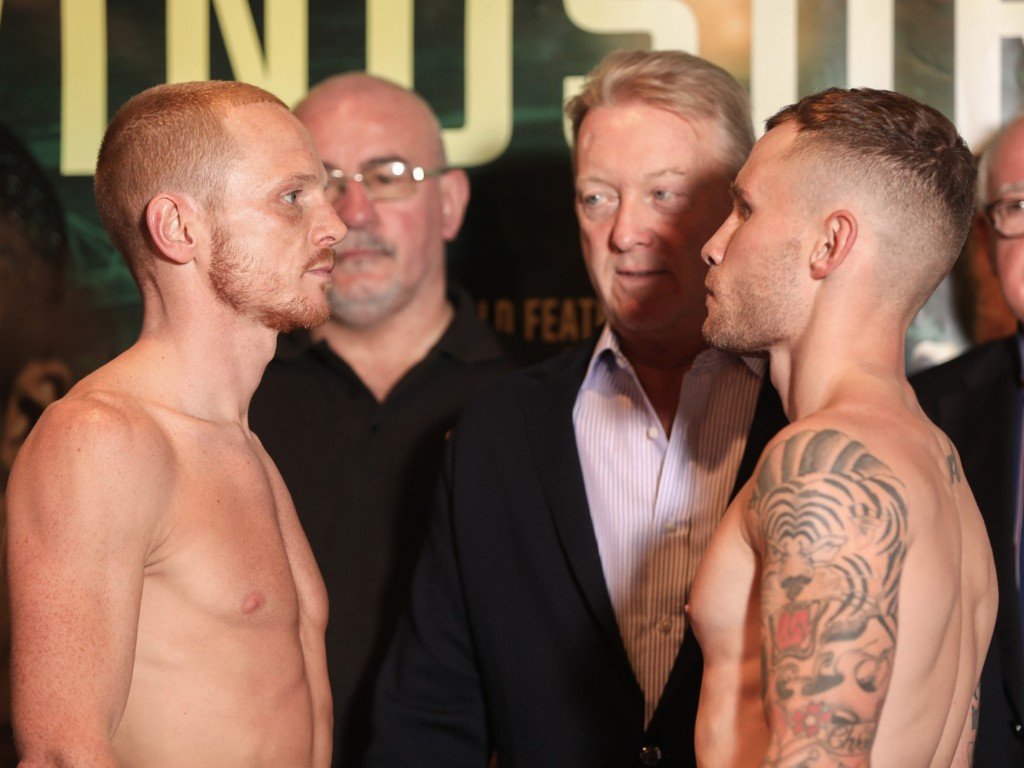 Early in the build-up to the fight, Jackson claimed ‘The Jackal’ was looking “heavy” and “sluggish”; comments that have left the Belfast hero eager to punish his unbeaten Australian guest.

Frampton said: “[Trainer] Jamie Moore has seen a lot of spite in sparring. There’s been a certain amount of spitefulness in the gym too – more so than before.

“What Jackson said annoyed me a little bit. I think he’s been a bit disrespectful. It’s a fight and the media make it bigger than what it is. It doesn’t matter to me though.

“If he was my best mate and I had the chance to take him out, I’m going to do it. It doesn’t matter what he’s said – he hasn’t said much to irk me. It won’t affect my performance.

“We’ll have a handshake after the fight and go our separate ways I suppose.

“There’s something in me. Madness, I suppose. Maybe that’s too strong a word, but I like dishing out the punishment. Maybe it’s small man syndrome! Whatever it is, it’s there…”

All the action will be broadcast live on BT Sport from 7.45pm

One of the best top-to-bottom pro boxing cards of the year will air Saturday afternoon, August 18, in Canada exclusively on Super Channel, live from Windsor Park in Belfast, Northern Ireland, United Kingdom.

“Canadian boxing fans are going to want to tune into Super Channel this Saturday as we bring them yet another incredible major boxing showcase,” said Troy Wassill, Director of Programming for Super Channel. “With Frampton vs. Jackson as the main event and Rosales vs. Barnes as the co-feature, not to mention the highly anticipated return of Tyson Fury, all set in legendary Windsor Park, this is a high-caliber, fully-stacked card that any boxing fan is not going to want to miss.”

“If he performs to his best and I perform to my best,” Frampton said of Jackson, “I’m knocking him out, simple as that. I’m due a knockout. I haven’t knocked anyone out in quite a while. He sees that he’s a complete underdog and there’s no pressure on him. People are writing him off. That can help fighters. When they have no expectations on their shoulders, they can go and perform out of their skin.

“I’m certainly not taking Luke Jackson for granted in the slightest. I’ve done that before against Alejandro Gonzalez and I ended up on my backside twice in the first round. I’ve learned from that fight. I’m the better fighter and I feel fit and sharp. I believe I’m one of the best supported fighters on the planet and that’s down to the passionate Northern Ireland sports fans.

“I want to be world champion again. If I lose this fight my career is over, that’s the truth, but I’m not intending to lose it. Victory over Jackson sets up a potentially sizzling showdown with another fighter who has a massive fan base, Josh Warrington, the new IBF featherweight champion from Leeds. Lips are already being licked in anticipation of that one.”

WATCH A BONUS FRAMPTON FIGHT, AVAILABLE FRIDAY, AUGUST 17 ON SUPER CHANNEL ON DEMAND, TO GET READY FOR THE BIG FIGHT

“Across the board,” the outspoken Australian spoke about Frampton, “but I don’t think he is as good as he once was. In the first fight against Leo Santa Cruz he boxed out of his skin and deserved to win, but he hasn’t looked the same since. Carl is a very good fighter who does everything good, but I don’t think he does anything great. I respect him as a fighter, I respect him as a man, but I am coming to beat him, not coming over to be friends.

“I don’t know if he wants me to call him a Hall of Fame fighter or the greatest, but I don’t think he is. He is very beatable, and I think I can beat him, simple as that.”

Rosales (27-3, 18 KOs), fighting out of Nicaragua, will be making the first world title defense of the title he captured last April in Japan, when he stopped Daigo Higa in the ninth round. Rosales is the cousin of Roman Gonzalez, the former pound-4-pound king of boxing.

The reigning WBO Intercontinental flyweight champion, Barnes (5-0, 1 KO) will also be fighting at home in Belfast in front of his passionate fan base. One of the greatest Irish amateur boxers of all time, Barnes will be fighting for a world title in only his sixth professional fight. He won two bronze medals (2008 & 2012) in his three trips to the Olympics, as well as gold in the 2019 European Championships.

“This is the fight that defines my boxing career,” Barnes claimed. “There were great achievements as an amateur including Olympic bronze medals, but that is only third place in the world, which is great. To be the best in the world at your weight, the WBC world championship is definitely the one to win. I did great as an amateur and people will remember me for what I’ve achieved, but a world professional title is what I really want. I would swap everything I did as an amateur to win this fight.”

Two other exciting fights on the “Frampton vs. Jackson” card, in addition to the previously mentioned main event and co-feature, will air in Canada exclusively on Super Channel.

The 6′ 9″ Fury became the undisputed world heavyweight champion, securing the IBF, WBA, WBO, IBO and The Ring championships, only to be stripped and/or relinquish his title belts without a single defense. Fury returned to the ring this past June against Sefer Seferi, who was unable to continue after four rounds.

Pianeta (35-4-1, 25 KOs), a native of Italy who lives in Germany, is a two-time world title challenger. The former WBO European champion is a cancer survivor.

To watch Frampton vs. Jackson live, as well as more exciting boxing to come in 2018, fight fans in Canada can contact their local cable provider to subscribe to Super Channel and all that it offers, including premium series, movies and much more, for as low as $9.95 per month.