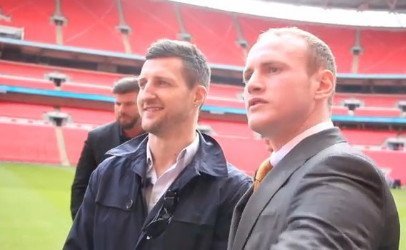 By Nathan Laryea: A professional prize fighter can be slave to many things. Commercial interests, fan pressure and promotional greed will push fighters into situations, and opponents, they may not have chosen for themselves. The power to choose, then, is a rare and valued commodity in this most dangerous of sports.

Few genuinely hold it. The pantomime surrounding Floyd Mayweather’s next choice of opponent is perhaps as clear an example there is of a fighter calling the shots in own career. Mayweather’s unique ability to bring masses of revenue into the sport has rendered him master of his own destiny, but that situation is significant because it is rare.

Fighters’ careers are often shaped by forces beyond their control. For those not quite of the standing of Floyd Mayweather Jnr choice is, for the most part, an illusion. The need for money, recognition and status will pull fighters into dark and dangerous places they would never otherwise choose to be, and Carl Froch knows that better than most. His career is defined by hardship, tough assignments often away from home in pursuit of respect and recognition in the Super Middleweight division. Now the poster boy of Sky Sports boxing offering, it wasn’t long ago he was on the outside looking in. Many of his most notable bouts, including the come from behind win over Jermaine Taylor and the thrilling first encounter with Mikel Kessler, were not carried on a live broadcast in the UK. In terms of mainstream attention Froch was on the fringes, with little choice but to pursue the biggest purses he could by fighting dangerous opponents on hostile ground, often away from the glare of UK TV cameras.

At 36 and in the autumn of his career, Froch has the mainstream attention he craves. His status as the pre-eminent fighter in Britain is unquestioned. With that Froch might expect to be able to be calling a few shots of his own, perhaps exert some control over how he exits the sport. In recent months Froch has talked almost wistfully about his desire to fight in Las Vegas before he retires, a prospect that he says “makes the hairs on the back of my neck stand up”. Fighting at the city ground, the home of his beloved Nottingham Forest remains another ambition. As does avenging his defeat to Andre Ward. In the past he has talked enthusiastically about a rubber match with Mikel Kessler, though it looks increasingly unlikely the Dane will choose to fight on.

Froch clearly has, or at least had, his exit route planned but he has encountered an unanticipated road block in the form of George Groves. Their first fight, thrilling and controversial, captured the imagination of British public in a way perhaps not seen since the days of Chris Eubank and Nigel Benn. In the aftermath of the first contest Groves laid a simple ultimatum at the feet of the champion, rematch or retire. Despite Froch’s proclamations and talk of “options”, those were really the only two credible choices available to him. In choosing to fight on, he has invited the dangerous Groves back into his orbit. The man who has built a career on taking on all comers has once again given the fighting public what they want, but is this really the fight he wanted for himself? He has stated openly that fighting Julio Chavez in Las Vegas was his preferred choice. He has also spoken about a lack of motivation in going over old ground. But yet here he finds himself, moved by the desires of the British fighting public, cajoled by a promoter looking to make history, swayed by the prospect of a 3-5 million pound purse, a reluctant participant in what could be the biggest British boxing match of all time.

Froch’s reluctance is unlikely to be the result of any fear or trepidation around facing Groves again. He has consistently faced the best throughout his reign as world champion. He acknowledges the first fight was stopped too early by Howard Foster, but believes he would have legitimately finished the job shortly after. Many agree with him. Froch has a well-earned reputation for coming on strong late in fights. We will, of course, never really know what would have happened had the fight been allowed to continue that night. Thankfully we now have a rematch to focus on. Froch will believe the toughness and durability he showed in the first fight will be enough to see him outlast the young challenger again. If he can he may well get his Las Vegas swan song.

But Groves presents serious danger and Froch would be foolish to look past him. The general consensus going into the first fight was that it was a mismatch, but nobody is saying that this time around. It’s wonderfully poised and British fight fans will enjoy the next few months in build up to the fight. For Froch though, this is a war of necessity rather than choice.