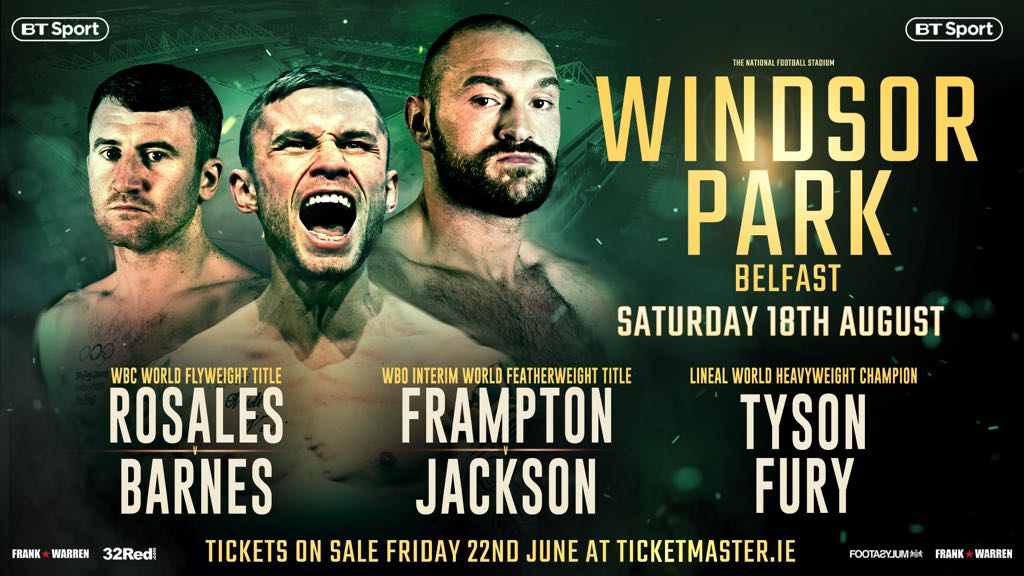 LUKE JACKSON has accused Carl Frampton of being overweight ahead of their big Belfast showdown.

The Australian star said: “I’ve seen some footage of Carl’s training. He still looks sluggish and bit heavy. It seems he is always on a plane going to places.

“They’re overlooking me, I’m just Luke Jackson from Australia who they are supposed to bowl over.

“I’m here in Sydney working my arse off. I can cause an upset and that is what I plan on doing.”

Jackson, 33, has coming to the end of a six week training camp in Sydney and shortly heads to Dubai with trainer Billy Hussein before fight week in Frampton’s back yard.

It’s the longest camp ever for the 2012 London Olympian, who says: “I am having a full eight weeks with Billy and had two weeks of conditioning in Tasmania before coming up to Sydney.

“I have been doing 12 round sparring sessions and sometimes we have had to cut to ten because they couldn’t stay with me.

“I always train hard, but when you are fighting a guy of Carl’s stature I have to be better in every area.

“I am pushing hard in the gym and I think it’s gonna show. It’s showing in my training and Billy is very happy with me.

“I never asked for the fight with Carl. They asked for me, I was waiting Oscar Valdez but this fight presented itself and I grabbed it because I think I can win.”

CARL FRAMPTON is embroiled in a verbal clash with big fight rival Luke Jackson after the Australian teased him over their amateur achievements.

Frampton (25-1) defends his ‘interim’ WBO featherweight crown against Jackson (16-0) at Belfast’s Windsor Park on Saturday August 18 – the biggest show ever in the city promoter Frank Warren has called: “The boxing capital of Europe”.

Jackson, 33, captained Australia at the 2012 London Olympics, competed twice in the World amateur Championships and won a bronze medal at the 2010 Commonwealth Games.

He said: “I’ve fought some very good guys as an amateur and I’ll be the first to say that as a professional I haven’t fought the guys Carl Frampton has fought.

“Carl Frampton hasn’t done what I did as an amateur. He never represented his country at the Olympic Games.”

Warren has told Belfast hero Frampton that a win in front of more than 20,000 fans and a huge BT Sport audience is likely to book a crack at IBF world champion, Josh Warrington.

But he is already in fighting mode after Jackson who was also a five times Australian amateur champion let loose with a verbal volley.

“I’m lucky it’s not amateur boxing then,” Frampton snapped back on Twitter after hearing of his opponent’s comments.

The two-weight world champion added: “Also, representing Australia in the Olympics is the equivalent of me having to be Co Antrim champion then beat the Isle of Man in a qualifier.”

Tasmanian Jackson has been in training for two weeks under Billy Hussein in Sydney and says he will leave no stone unturned before moving to Dubai for the next stage of his camp.

Frampton, 31, is fresh off a magnificent points win over Nonito Donaire, but Jackson is questioning the validity of that triumph.

He says: “I respect Carl and I watched his fights against Leo Santa Cruz. In the second fight he fought the wrong fight. He was trying too hard and it didn’t work.

“I watched a few rounds of the Donaire fight and is he is a good fighter, but he is finished. He is not the Donaire he once was.

“Nicholas Walters knocked out Donaire and I beat him in the amateurs. I am not saying I could beat Donaire, but you understand what I mean.

“I’ve been in there with fighters these guys have been in with. Amateur or professional it’s all hit and not get hit.”