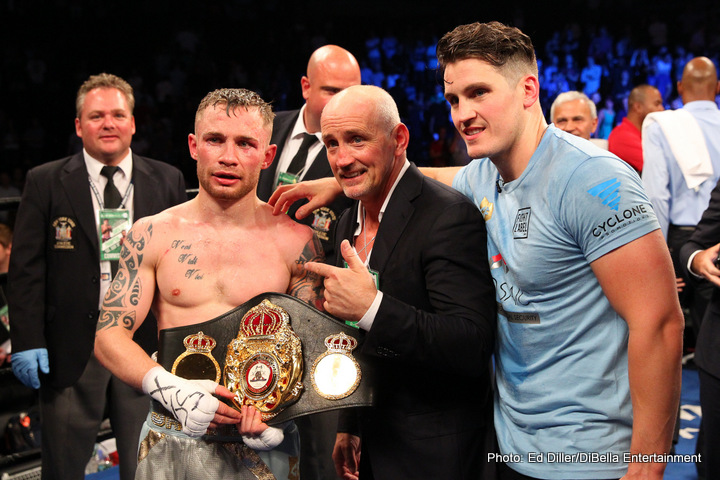 According to various reports coming out of Ireland, the once tight knit relationship between Carl Frampton, the fighter and Barry McGuigan, the manager may be headed towards a separation. Nothing has thus far been one hundred-percent confirmed, nor denied, but numerous sources – including BBC Sport NI – report that Frampton may be close to leaving Cyclone Promotions.

Frampton, the former super-bantamweight and featherweight champ, has been with McGuigan since going pro back in 2009 and the working relationship seemed one of the most solid in all of boxing. There was mutual respect, McGuigan having fought his way to a world title himself, Frampton very much looking up to his former hero, but now it seems the two are set to part ways.

Things became nothing short of crazy at the end of July, when Frampton, first failing to make weight for his fight with Andres Gutierrez (this fight Frampton’s first fight back since losing his 126 pound title and unbeaten record to Leo Santa Cruz), saw the fight ultimately fall apart due to bizarre reasons – the Mexican falling in the shower and severely injuring himself.

These unexpected events are said to have done nothing to help the already frayed relationship between Frampton and McGuigan. Ten days before the scheduled fight with Gutierrez, Frampton resigned his position as director of Cyclone Promotions. If Frampton does make a clean break from his former mentor there will be big changes in his career. First up, Frampton, 23-1(14) would almost certainly need a new trainer, as he is currently trained by Shane McGuigan.

Unless Shane can continue to work with Frampton, but without his father being part of the team, the former champ will need a new coach and soon. As for who Frampton’s new promoter might be, there is even talk that “The Jackal” may head back to Eddie Hearn’s Matchroom stable.

So far, neither Frampton nor McGuigan have made any official comment. It is to be hoped these separation reports are much exaggerated, but it does seem doubtful.