The WBC revealed on Thursday that they’ve designed a special Mestizo Belt that they plan on giving to the winner of the May 8th unification fight between WBA/WBC 168-lb champion Canelo Alvarez and WBO champ Billy Joe Saunders in their right on DAZN at the AT&T Stadium in Arlington, Texas.

It’s a kind of a wasted effort by the WBC to create a special belt for the Canelo-Saunders fight, but they’re doing it anyway. You can argue it’s a strategic move by the World Boxing Council to get a little positive press.

Canelo vs. Saunders will have four belts on the line for their match-up. Alvarez (55-1-2, 37 KOs) has made it known that he’s going to be taking on IBF champ Caleb Plant in September for the undisputed championship.

If Saunders (30-0, 14 KOs) wins on May 8th, his intentions are obvious. He’ll go for the money fight by taking on Canelo in a rematch rather than face Plant and make much less green.

Saunders, 31, isn’t happy with the preparation that Canelo’s promoter Eddie Hearn is doing to plan the Plant fight before their May 8th fight.

“I think I’ve met his dad twice. The first time was when billy signed with us,” said Eddie Hearn to IFL TV on Saunders and his dad Tom. 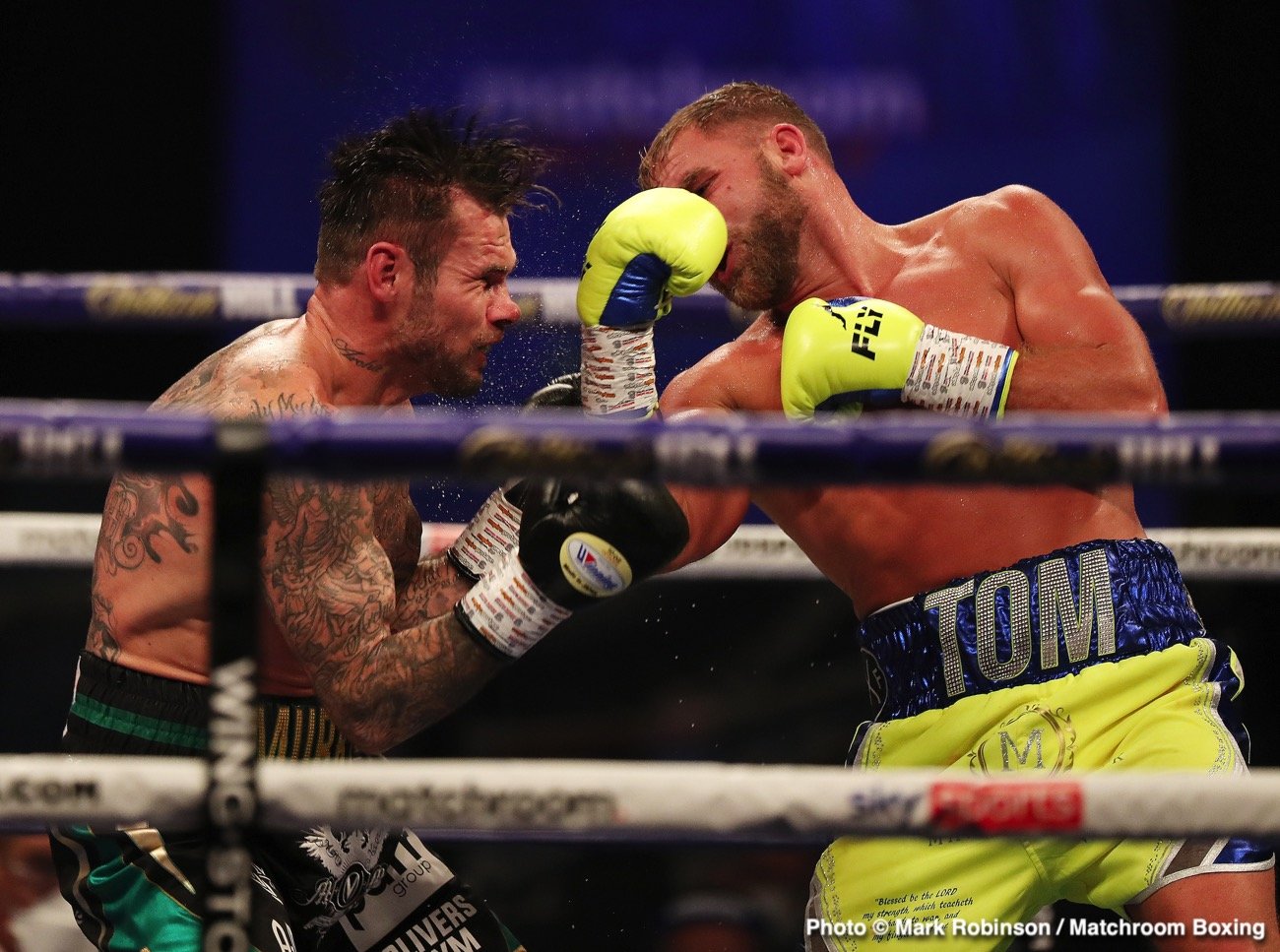 “The second time was in Vegas last week. I don’t think he’s a huge fan of mine. I never really felt he was, even when Billy signed with us.

The problem is, when you have mistrust for people for many reasons, sometimes you tar people with the same brush.

Out record in boxing speaks for itself with the way we treat people and our honesty, and you can speak to most fighters about that. I have a decent relationship with Billy Joe Saunders.

I had a job to do for Billy Joe Saunders to deliver him the opportunities and the fights that no one else has delivered to him for his career.

We all know last year, I got to deliver him the Canelo Alvarez fight in 2020. We were one day away from announcing the fight and COVID hit and we had to put up with people saying, ‘When are you going to get Billy Joe Saunders a big fight?’

We had it. He went off and boxed Martin Murray, and now I delivered him the Canelo Alvarez fight. I can’t really do anything more than that.

So if he don’t like me or if they [Tom and Billy Joe], don’t like me, there’s not really a lot I can do. One thing I spoke to Billy Joe since the interview.

We’re one million percent fair. We know that certain commissions have ruled on judges.

“The last time Canelo boxed Callum Smith, there were no British judges, and that’s the same that will be there for this fight,” said Hearn.

Canelo is the equivalent of the famous ‘Hope diamond’ whereas Saunders is more of a Cubic zirconia type diamond.

The two fighters are on the opposite side of the spectrums, which means Saunders cannot receive the same attention from Hearn, the judges, or the boxing world.

“I think where the problem is that when we first discussed this fight, we talked about having a British judge,” said Hearn. “Now we’re just having three neutral judges.

“But the contract that Billy signed clearly states, ‘No Mexican, no British, neutral judges.‘ They will have the opportunity to look at those judges.

“The panel will be sent to those guys. Now, this was something that was discussed with their team, it was papered, and it was signed for.

There’s no moving of goalposts. I watched the interview [by Saunders], and then he said he was told there would be no crowd. I don’t understand.

“No, not really. We weren’t able to take this fight to Vegas where we would be able to command a huge gate like a normal Canelo Alvarez fight.

“The other comment was, he saw me in Canelo’s gym. I flew to see Canelo Alvarez last week in San Diego. I stayed there for a few hours, and then I went to go see Billy Joe Saunders do the same,” said Hearn.

It’s interesting that Saunders and his father Tom are so worried about not having one British judge among the three when the fight isn’t expected to be competitive.

Even if they had a British judge, it wouldn’t change anything. If you come with the argument that the other two judges are going to be leaning in the direction of Canelo, Saunders would still lose the fight.

Unfortunately for Saunders, there’s little chance the fight will be close enough for the judges to matter.

Saunders has the fight he wanted

“It’s a horrible problem that you have when you promote both fighters in a fight. I hate it because someone always feels, ‘You’re siding with him.’

“No, not at all. I’ve delivered you the opportunity that you asked me to deliver and the rest is up to you.

“I can’t do anymore. If you don’t want me around, you don’t want to speak to me, that’s disappointing. But if he goes and wins, I’ll be delighted for him.

“I feel like I’ve done my job for Billy Joe Saunders. There was a time that I had to back him through some rough periods, to be honest with you, and I actively backed him in interviews and access social media.

“A lot of people told me that I shouldn’t, but that’s irrelevant. I like Billy Joe Saunders, I have no problems with Tom. I like Tom and the team.

“If there’s any objection before the fight without someone they’re not happy with, they can object to that,” said Hearn about Saunders having the opportunity to object to any of the judges on the panel.

“This wasn’t something in the contract that I just changed now. This was signed in the contract. No Mexican, no British. A neutral panel of judges, and that’s what it will be.

“I’ll make sure there are no objections for them, and I’ll do my job as a representative to Billy Joe Saunders that he’s happy with the judges,” Hearn said.

Saunders can’t say that Hearn did him wrong considering he set up the fight with Canelo, and now he’s set to receive a career-high payday.

It’s up to Saunders if he wants to get an even bigger payday by beating Canelo to put him in position for a rematch.

“I want him to focus on this fight,” said Hearn about Saunders. “I messaged him the other day, ‘I saw your dad’s interview.

“I was really disappointed.’ ‘I’m trying to focus on the fight.’ Good, don’t focus on the judges. This will be a fair fight.

“Hopefully, we can move forward. I was disappointed for the interview, but I feel like I’ve done a great job for him, and I will back him and support him.

“I will continue to do that on fight week, now and on the night and I will be absolutely 100% fair. My job is to give you the biggest fights for the most amount of money, and I’ve done it twice now.

“I can’t do anymore. We’re going to make sure that everything is right 100% for Billy Joe Saunders. I’ll make sure that we have three outstanding judges on this panel.

“If anyone’s unhappy, they can make their case. But ultimately, we don’t choose the judges. The commission will tell us the judges.

“We can object to those. I don’t think there will be many objections because I think a first-class panel will be put forward.

“Tom Saunders made a good point or I think it might be Billy. He [Canelo] throws a jab and 70,000 people go mad.

“That’s what you’re up against. It’s nothing about corruption,” said Hearn.

The way that Saunders has been complaining and looking sore loser, he’s already mentally lost the fight to Canelo.

Saunders’ body language is that of a disgruntled fighter, who has already accepted that he’s lost the fight.

1 thought on “Canelo vs. Saunders winner to be given WBC Mestizo Belt”