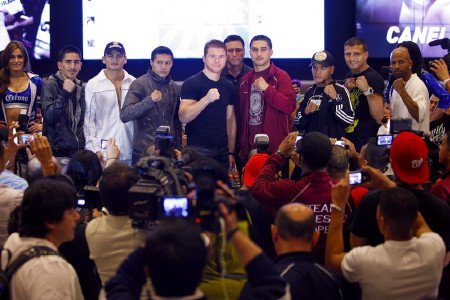 (Photo credit: Ester Lin/Showtime) By Marc Livitz: Hardcore fans and the so-called purists alike may feel themselves a bit torn this upcoming Saturday evening. Contrary to popular American belief is the fact that Cinco de Mayo is not Mexican Independence Day. There’s always been a reason why the weekend which most closely precedes or follows the sixteenth of September is a hot date for the sweet science and the old lady will be wearing her finest pearls this weekend.

Sadly and to the disappointment of many of her loyal and regular suitors, she’s in a bit of a huff over the idea that a few knuckleheads have intentionally thrown some mud upon her nicest dress. The cleaning bill once again has inexplicably been chucked in the direction of the fans.

One of the biggest sins of the sponsor and spawn is to put the paying customer in a corner. The old goat has been in a face-off with the younger brood for a long while, as we all know. Of course, there are and continue to be stumbling blocks to the fights which we all want to enjoy. The one placed before us was however arguably avoidable. It’s still in the nature of people, particularly men, to go ahead as planned without clear regard to the consequences of their actions.

Someone, or a group of supposed brainiacs, must certainly have realized by now that they’ve rolled a pugilistic gutter ball.

The facts are in and it’s a social norm that the figures don’t lie. The fight between Julio Cesar Chavez, Jr. and Sergio Martinez, which is to take place at the Thomas and Mack Center on the campus of the University of Nevada Las Vegas is officially sold out. The rumblings within the boxing world notified most of us that a storm was brewing in regard to the popular date for Sin City showdowns. Top Rank and DiBella Entertainment have already scored a collective knockout in terms of a smash of an evening in the desert, and there may be more heaps of praise to follow should the bout turn out to be a memorable classic.

Contrast the aforementioned situation with the event set to commence just a stone’s (or eleven stone) throw from UNLV.

Golden Boy Promotions went ahead with its plans to showcase Mexico’s other prominent fighter Saul “Canelo” Alvarez in a junior middleweight title contest against Josesito Lopez. Boxing is of course the theater of the unexpected and anything can happen on any given night once the opening bell sounds. One could easily argue that the southern California based company simply had to move forward with the respective cards which were dealt to them. Alvarez will be facing the third option in terms of opponents, most notably one who allowed no confusion with his decision to return to 140 pounds and fight on as a junior welterweight.

Josesito Lopez scored a TKO victory over Victor Ortiz in June of this year in a fight that not only saw him compete at his heaviest to date (nearly 145 lbs) but triumph in the ninth round after breaking Ortiz’s jaw in a bout which he was losing at the time of the stoppage. He’ll be outweighed by a few pounds or a lot more, but who can blame the kid for diving for dollars?

Saturday’s other contest will go down at the MGM Grand Garden Arena, which is just a short distance down Tropicana Avenue from its’ rival promotion. None of this would matter if the interest was sky high for both events. Surprising but not in the least shocking is the plain as day truth. The mismatch at junior middleweight will at least give Canelo a chance to hear the snap of his punches because he may be fighting in a cavern.

As seen in bouts over the years, there are instances where fight tickets literally have to be given away. There have even been promotional fight ticket and hotel accommodation packages available directly through the hotel for the Alvarez contest. Nod the good samaritan head in the direction of Oscar and Co.; because this is a very friendly business model to introduce to the fans of the sport of boxing. The MGM will luckily make much of its money paid in site fees back in the casino and sports book this weekend.

To be fair, the event does have quite the stellar undercard. They get an “A” for effort alone.

Hopefully, an enigma of this nature won’t happen again soon, but it probably will. No one’s really at fault here, yet neither are completely free of it. The fans were made to choose (which was a mistake) and they have collectively spoken.

It’s a shame because both events have meaning, purpose and potential. The two main promotional companies can continue their squabbles for the time being…but please keep us out of it.

When the argument spills out onto the street, all we can do is watch. Don’t make matters worse by forcing the bread and butter of the sport’s financial wins and losses to turn its head too many times.

It ultimately makes us feel a little punch drunk.