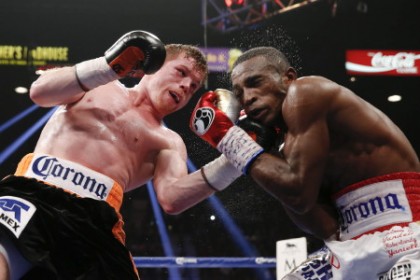 Lara was understandably better after the fight, saying “I have no respect for him. I want a rematch. I’ll do the same and I’ll beat him. I felt like I won the fight 100 percent. I made him look bad in front of his own Mexican fans. I won the fight.”

De La Hoya said “What I heard from everyone is that no one wants a rematch, there’s ten guys waiting in line. Lara has to wait in line. Canelo won tonight and now we have to move on.”

While De La Hoya said that Lara can get in line, it’s highly unlikely that Canelo will ever fight him again during his career. With Canelo’s habit of fighting guys from the lower weight class, he’ll always be able to fight the top welterweights for many years to come after he exhausts the few junior middleweights in the division worth fighting. There’s really only Floyd Mayweather Jr, Lara, Austin Trout, Carlos Molina and Demetrius Andrade.

At best you could give Canelo a draw out of the fight because with the way that he was missing, he failed to establish that he was the better fighter tonight. What the two judges did that scored the fight for Canelo was give him rounds based on him coming forward and trying to make a fight of it, but not on effective aggression. There’s a difference. Canelo was coming forward and missing shots instead of coming forward and landing. When Canelo did land, more often than not he was hitting Lara low without the referee stopping the action to warn or take points off.

Conor McGregor: I Won Rounds And Hit Mayweather More Times Than Pacquiao Did When They Fought764 Total Shares