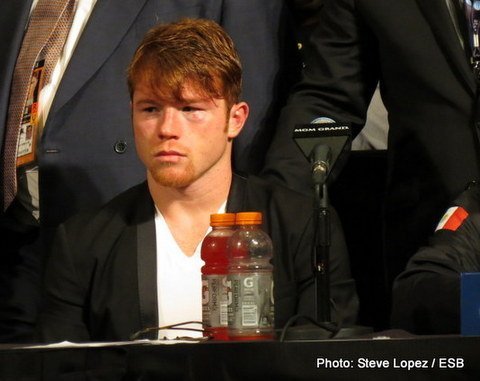 “Oscar De La Hoya, at a media roundtable at HBO, confirms that it will be Canelo Alvarez-Josh Clottey in December,” Chris Mannix said on his twitter.

Fighting Clottey serves the purpose if getting Canelo a safe opponent for him to beat in order to move him forward to a possible bigger fight against WBC middleweight champion Miguel Cotto next year in May on the Mexican holiday Cinco de Mayo. There’s still no telling whether the Canelo-Cotto fight will ever get put together though due to the egos involved, but that’s the fight that Canelo and De La Hoya want next year in May.

Clottey has fought precisely three times since his loss to Pacquiao in 2010. That’s 3 fights in 4 years. With that kind of activity, you have to wonder why De La Hoya and Canelo decided to fight Clottey. They might as well have dragged Antonio Margarito out of retirement and had him taking the fight. Clottey is coming off of a 12 round decision win over 39-year-old Anthony Mundine in his last fight in April. The win is a good one, but Mundine is up there in age and he’s come down in weight two entire divisions from super middleweight, and he’s lost a lot of the power he had at 168. A 168 pound version of Mundine likely would have done a job on Clottey, but in losing pretty much nothing but muscle in coming down in weight, Mundine is just a shadow of the fighter he was at super middleweight.

Canelo is coming off of a controversial win over Erislandy Lara from last July. A lot of boxing fans still think Canelo lost to Lara. Either way, Canelo looked awful in that fight and showed that he hasn’t improved at all since his one-sided loss to Floyd Mayweather Jr last year.