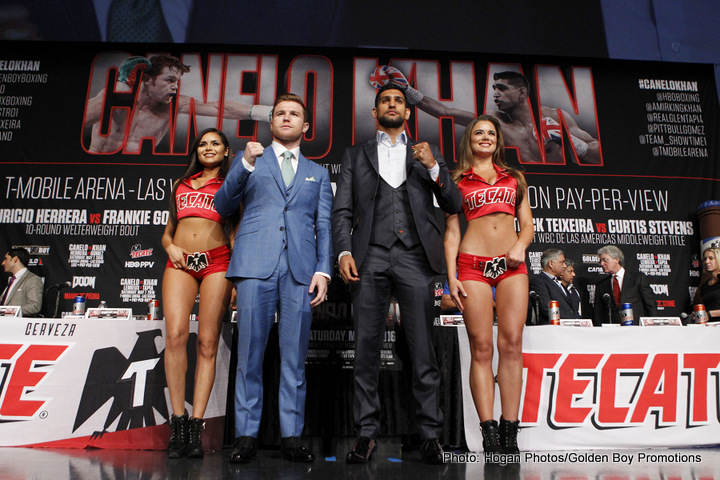 LOS ANGELES (May 5, 2016) – Once again on the cutting edge of technology, media and sports, Golden Boy Promotions will bring its fans Canelo vs. Khan via Live via the Internet. The company will stream the May 7th mega-fight between WBC, Ring Magazine and Lineal Middleweight Champion Canelo Alvarez and Amir Khan live at 9 PM EST and 6PM PT.

As the world’s leading boxing, sports and entertainment company, Golden Boy Promotions specializes in creating the very best fights and developing the best fighters in the world and showcasing them through premium live sports content. For the past several months, Golden Boy has been providing fans access to its highly competitive and entertaining LA Fight Club series through its owned and operated GoldenBoyPromotions.com, RingTVLive.com, Roku Channel, Amazon Fire Channel and through partnerships with myriad platforms.

“Our cable, satellite and telco distribution partners remain the key means to reach boxing fans. However, as our viewership on GoldenBoyPromotions.com and RingTVlive.com has grown over the past several months, we have learned a great deal from our fans – and they have been clear that the time has come for us to make this mega fight available online as well,” said Oscar De La Hoya, Chairman and CEO of Golden Boy Promotions. “We see Canelo vs. Khan as a first step in this evolving media landscape.”

Golden Boy Promotions has selected LiveStream as its online streaming company for this fight. Livestream’s mission is to connect people and live events offering event owners a complete set tools to make the very best in fan experiences. The event will be priced at $69.95. Additional premium content including behind-the-scenes short form video from each fighters’ training camp, international press conferences as well as full episodes from the highly acclaimed Mano a Mano series will accompany this Pay-Per-View offering.

For those wishing to view the fight on cable, it will be featured Live on HBO Pay Per View starting at 9:00 PM EST

Quantity over Quality is the Theme for this Weekend0 Total Shares