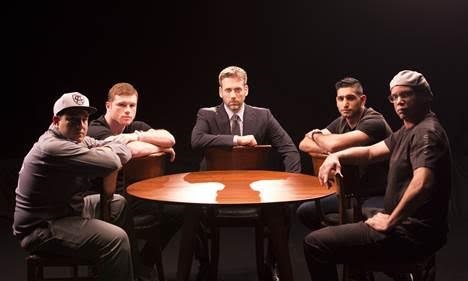 March 31, 2016 – Fight fans eager for a revealing inside look at the eagerly anticipated May 7th HBO Pay-Per-View® middleweight championship superfight between Canelo Alvarez and Amir Khan, should mark their calendars to catch an all-new edition of “Face Off,” starring the two prizefighters. “Face Off With Max Kellerman: Canelo/Khan” debuts Saturday, April 16 at 11:15 p.m. (ET/PT).

Moderated by Max Kellerman, “Face Off” is an insightful and often gripping interview session in which the two fighters square off and answer Kellerman’s questions. This marks Alvarez’s second visit to “Face Off,” and the first-ever appearance for Khan on the series. In addition, the fighters will be joined on the set by their accomplished trainers. Both Eddy Reynoso and Virgil Hunter will participate in the round table.

The Canelo/Khan edition of “Face Off” is set to air multiple times on HBO and HBO2. “Face Off” will also be available on the HBO On Demand® service, HBO NOW, HBO GO® and at www.hbo.com/boxing as well as various other new media platforms that distribute the program.

All times are ET/PT.

“Face Off With Max Kellerman: Canelo/Khan” is part of the wide-ranging mix of original programming content being produced for the inaugural boxing event to take place at the brand new T-Mobile Arena in Las Vegas. It all culminates when Canelo vs. Khan happens Saturday, May 7. The fight card will be produced and distributed live by HBO Pay-Per-View beginning at 9:00 p.m. ET/ 6:00 p.m. PT.