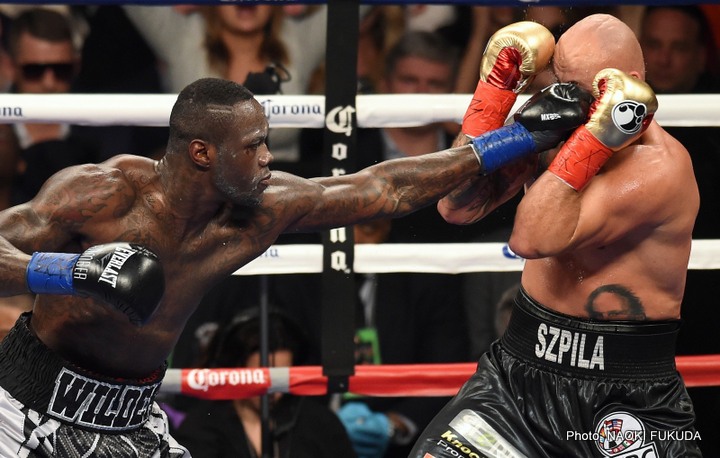 The undefeated American superstar puts his title on the line for the fourth time against the Russian mandatory challenger and former WBA World Champion at the Khodynka Ice Palace.

In a real life re-enactment of the iconic Rocky IV movie that saw Rocky Balboa head to Russia and face the indestructible Ivan Drago, Wilder must enter hostile territory after Povetkin’s promoters won the purse bid to stage the fight on home soil.

The dynamite-punching and brash Wilder, 30, has lit up the heavyweight division with his explosive performances that have seen him stop all but one of his 36 opponents with a staggering 28 coming inside three rounds.

Since winning the WBC crown from Berman Stiverne in January last year, the ‘Bronze Bomber’ has made title defences against Eric Molina, Johann Dhaupas and Artur Szpilka and won all by stoppage, but now faces the most difficult challenge of his career.

Povetkin, 36, a former world class amateur winning Gold at the 2004 Athens Olympics and 2003 World Championships, won the WBA World title in 2001 by defeating Ruslan Chagaev in 2011 and made title defences against Cedric Boswell, Marco Huck, Hasim Rahman and Andrzej Wawrzyk – winning three out of four by stoppage.

A unification showdown against then division king Wladimir Klitschko, the IBF, WBO, WBA Super World Champion followed in October 2013 and despite being floored four times in the fight, Povetkin took Klitschko the full distance only to lose on the judges’ scorecards, which remains his sole career defeat. Since then he’s knocked-out his last four opponents to earn his world title shot.

Further big live world title action coming up on the Channel of Champions in April sees Eduard Troyanovsky and Cesar Rene Cuenca clash in a highly anticipated rematch on Friday 8th April from the Krylia Sovetov in Moscow, Russia.

Russian Troyanovsky beat Argentinean Cuenca last November, halting him in six rounds with many feeling that the fight was stopped too early and now they collide again with the IBF and IBO World Super-Lightweight titles on the line.

Glowacki won the title in a thriller in his last fight against Marco Huck last August when he stopped the German based Serbian in the eleventh round, live on BoxNation.

Huck dropped Pole Glowacki in the sixth round and was ahead on the scorecards before Glowacki found a big punch to floor Huck in the eleventh, it could have been stopped by the referee, but he was given a chance to continue and Glowacki steamed in to get the stoppage.

Also on the card fast rising star and 2012 U.S Olympian Errol Spence aims to become the first fighter to stop former world champion Chris Algieri in a 10-round welterweight showdown.