Canelo Alvarez told his fans at Friday’s weigh-in that he’ll be looking to knock out Gennadiy Golovkin from the first round so that he carries out his goal of stopping him within 12 rounds in their trilogy fight at the T-Mobile Arena in Las Vegas.

To be sure, the controversial decisions in the first two Canelo-Golovkin fights in Las Vegas make it important for Canelo (57-2-2, 39 KOs) to try and take the judges out of it.

The 32-year-old doesn’t need another questionable decision going his way, as that would further the belief that he’s protected by the judges when facing elite-level competition.

Golovkin’s punch resistance will make it difficult for Canelo to score a knockout in this fight, as he takes a good punch.

In Canelo’s case, he would be better off focusing on trying a decision in a conclusive manner rather than putting himself at risk of getting clipped by Golovkin by going for a knockout.

“He saw nothing new in my eyes. What he will see new, what he needs to see, is what happens tomorrow,” said Canelo Alvarez in his final words during today’s weigh-in for his fight against Gennadiy Golovkin.

“That’s what I want [to inflict pain on Golovkin], but I know it’s not going to be easy. He’s a great fighter. I want to finish it within 12 rounds, and I’ll be looking for that from the very first round,” said Canelo.

“I don’t believe that. One of the last things a boxer loses is his punch,” said Valdez when asked if Golovkin’s age is a disadvantage for him. “Canelo hasn’t won yet, and they’re already saying his age is going to be a factor.

“Golovkin is a dangerous fighter no matter what. So we’ve got to give credit to Canelo and Golovkin as well. Sometimes going up a division helps. We won’t know until this fight if it’s going to help him or if it’s going to affect him.

“They’re coming to support Canelo. I just happened to pass by. I’m grateful for each one of those fans,” said Valdez. 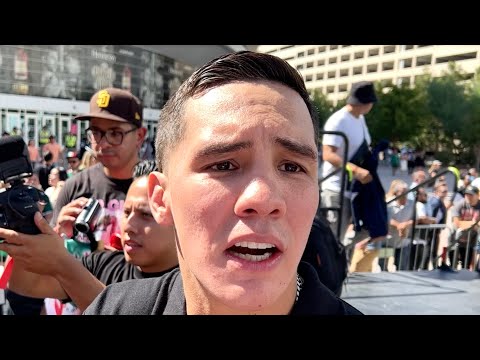