Promoter Eddie Hearn has ruled out IBF/WBC light heavyweight champion Artur Beterbiev being an option for Canelo Alvarez to fight in December after his battles against Dmitry Bivol and Gennadiy Golovkin this year.

According to Top Rank promoter, Canelo’s fight with Beterbiev (17-0, 17 KOs) will most likely occur in May 2023 on the Cinco de Mayo holiday.

This is assuming that both fighters win their matches this year. Beterbiev will be fighting WBO light heavyweight champion Joe Smith Jr. next month on June 18th in a unification clash at Madison Square Garden in New York.

If Canelo chooses not to take on Beterbiev in May 2023, he could potentially be facing Jermall Charlo. That’s a fighter that the Mexican star has shown interest in fighting.

Hearn says Canelo’s December fight will be against one of his two mandatory’s that would be due at 168 or 175. If Canelo moves back down to 168, he would face his WBA mandatory John Ryder in London.

Ryder is coming off a skillful 12-round decision over Danny Jacobs in a WBA 168-lb title eliminator.

“I just think only if he fights in London,” said Eddie Hearn to Fighthype when asked if Canelo Alvarez will fight John Ryder in December.

“If he fights in London in December [it could be Ryder]. It’s not going to be Beterbiev. If he [Canelo] fights as quickly as that after the September 17th, then he’ll probably fight one of his mandatory’s,” said Hearn in dropping a big hint that Canelo’s December fight will be against his WBA 168-lb mandatory Ryder.

Canelo mentioned wanting to fight in London this week. That would be against Ryder because Canelo intends to retain his titles.

Many boxing fans would like to see Canelo face #1 WBC David Benavidez this year or in 2023, but he’ll likely focus on fighting other opponents rather than take that fight.

Buatsi would be a brutal fight for Canelo to fight in December because he’ll likely be coming off a grueling battle against Golovkin in September. Although some boxing fans predict Canelo will stop Golovkin, nothing in their two-fight history suggests that the Mexican star will stop him.

“That could be an option for Mexico,” said Hearn when asked about Canelo possibly going up to cruiserweight for his December fight. “He fights in London, or he fights in Mexico. That [Ilunga Makabu] would be a good fight for Mexico. 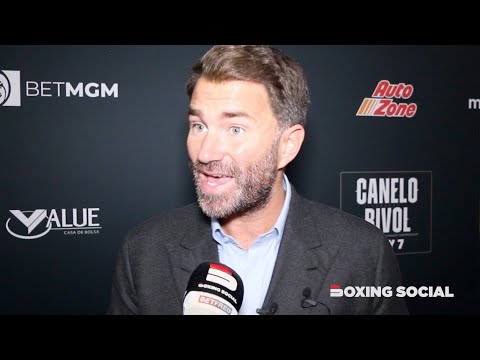