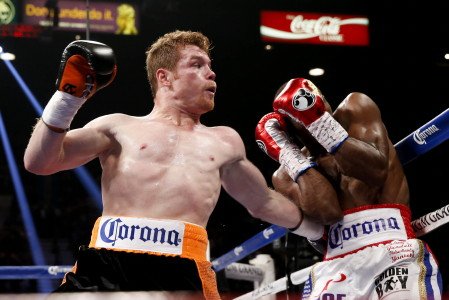 Canelo started the bout patiently and picked his spots, but Lara’s footwork and movement seemed to frustrate him. Canelo became increasingly more aggressive as he tried to cut off Lara. Canelo landed only 23 percent of his total punches including 73 power shots to the body.

A decorated Cuban amateur, Lara displayed superb footwork limiting Canelo’s chances and scoring when necessary. The game plan was effective as he frustrated the 23-year-old superstar.

“I came to fight, I didn’t come to run here,” Canelo said. “You don’t win by running. You win by hitting. He does have a great jab and he moves around, but you don’t win a fight that way. You don’t run.

“I want to leave people with a good taste in their mouth. This wasn’t the fight I expected; I wanted to go toe to toe. He didn’t come to fight. He came to run. He’s a great boxer – I respect him – but he has to learn how to throw more punches.”

It was an early birthday present for Canelo, who turns 24 in six days and is now 8-1 in 12 round fights.

“When he learns how to fight then I’ll give him the rematch,” Canelo said. “For now, my birthday is coming and we’re going to have fun.”

The 32-year-old Lara, who pressured Canelo into the dangerous bout via social media, was upset with the split decision.

“The body shots connected but they didn’t have any force. I still have no respect for him. I’m asking for a rematch. One hundred percent I’ll do the same and we’ll win again.”

Abner Mares bounced back from the first loss of his career and overcame the adversity of a cut on his left eyelid with a unanimous decision victory over Jonathan Oquendo, scored 96-94, 98-92 twice.

Mares suffered the cut from a punch in the fourth round, but his cut man, “Jacob “Stitch” Duran did a tremendous job of closing the gash and preventing it from affecting his fighter. Fighting for the first time with renowned trainer and defensive specialist Virgil Hunter, Mares fought intelligently throughout the bout. The three-division world champion prevented Oquendo from inflicting damage inside, utilized solid footwork and was extremely efficient.

Mares landed 49 percent of his power punches, doubling up Oquendo (24 percent), who failed to make adjustments and didn’t throw enough jabs to put himself in a position to land power shots.

Francisco Vargas defeated Juan Manuel Lopez via TKO when Lopez’s corner stopped the bout after a vicious third round.

In a round of the year candidate, Vargas (20-0-1, 14 KOs) and Lopez exchanged shots in brutal back and forth action in the third stanza. Seemingly never in a dull fight, Lopez was knocked down with 20 seconds to go in the third after eating a huge right hand. Lopez got up and continued to press, but ate another big shot in the closing seconds and was dazed as he walked back to his corner.

“I knew he was hurt but I know he’s a warrior,” Vargas said. “My corner was making preparations to be able to knock him out. I won by throwing combo punches to Lopez’s upper and lower body. Once I did that, I knew he had lost control.

“I’m very happy for this moment. I want to tell everyone that I’m ready for anybody at 130 pounds.”

While it was the biggest victory of Vargas’ young career, this could be the end for the road for what has been a brilliant campaign for the former world champ.

“I wanted to keep fighting – I’m a warrior,” Lopez said. “But my corner decided it was enough. I really don’t know right now if I’m going to retire. I have to sit down with my family and my promoter and decide what the next step will be.”

The early rounds were close, but the crafty Herrera (21-4, 7 KOs) pulled away after the sixth, pocketing rounds and landing power shots with ease. Herrera’s strong right hand and defensive sharpness was the difference against Perez (19-2-1, 13 KOs), who continually ate punches and couldn’t block Herrera’s slick combos.

No stranger to close decisions, Herrera was also the more effective fighter, having thrown and landed more power, jabs and total shots.

“It was difficult at first because he had a very awkward style,” Herrera said. “It took me a minute to figure it out and he was making me miss a lot of shots at first. But once I relaxed and adjusted to the awkward style I was able to get into rhythm, take control of the fight and put more pressure on him. I felt like I was a hungrier fighter here tonight and that’s why I pulled away with the victory.

Perez, who raised his hands after the bell rang in the 12th, took issue with the judges’ decision.

“I felt that Mauricio had a difficult style and that it was a close fight,” Perez said. “Ultimately, I felt that I won the fight. I am really surprised by the decision and I want an immediate rematch.”

Tomoki Kameda (30-0, 19 KOs) defended the WBO Bantamweight World Championship with a brutal 7th round knockout victory over Pungluang Singyu in a live bout presented on Canelo vs. Lara: COUNTDOWN LIVE on SHOWTIME®.

The vicious right hook immediately floored Singyu (46-3, 31 KOs), sending the former WBO Bantamweight Champion to the canvas reeling in pain. Referee Russell Mora counted out the Thai boxer at 1:35 of the seventh.

“Brilliantly executed knockout,” said expert analyst Farhood of the Japanese Kameda, who was making his U.S. debut. “I’d love to see him fight again, who wouldn’t?”

On Mayweather announcing Maidana rematch: “I am not surprised at all. He wants to right some wrongs from that first fight. Everybody knows Floyd Mayweather is smart. He will adjust and I expect him to do a lot better in this next fight.”

On his hopes of fighting Floyd: “I want some of that, for sure. I want that ‘0’. You know, Kell Brook has an ‘0’ but that doesn’t mean nearly as much to me as getting a shot at Mayweather’s.”