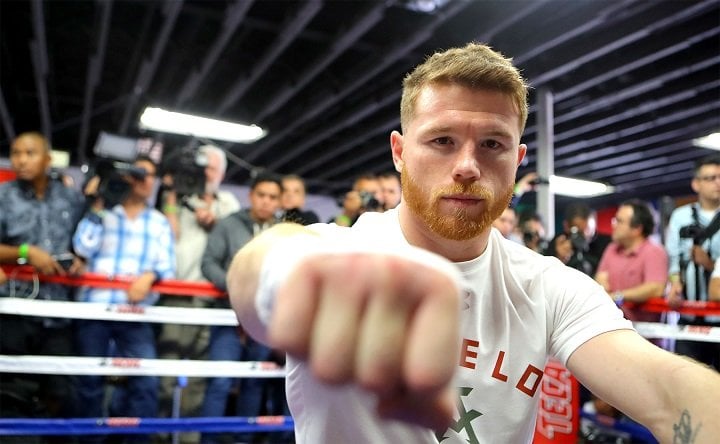 Middleweight rivals Gennady Golovkin and Saul Canelo Alvarez are now in New York, on the latest stop in their pre-fight press tour. As fans may have read, Mexican superstar Canelo has access to a rematch of the upcoming September 16 showdown, should he need one (GGG has no such luxury).

But, as quoted by RingTV.com, Alvarez said to the gathered media in New York that he aims to win the fight so clearly, so decisively in September that there will be no need for a second meeting. A dramatic KO win would of course give the once-beaten star what he wants – and Canelo has that KO victory on his mind.

And Canelo should be pumped up for this one; as should GGG. We fans sure are. Both men need to be at their best to win the September battle, something they both know full well. Golovkin has gone on record as saying that this fight is the biggest, toughest test of his entire career. Canelo has already had an even bigger fight – the one he lost to the masterful Floyd Mayweather. Alvarez feels that loss inspired him to get better as a fighter.

“I’m more confident now, I have more experience,” Canelo said when the Mayweather fight came up. “That fight motivated me, and I think that more than anything, instead of deterring me, it motivated me to become a more complete fighter.”

So is Canelo a complete fighter today, equipped with the necessary tools to defeat the unbeaten Golovkin? A genuinely 50-50 Super-Fight, fans cannot wait to find out who comes out on top in this one. Fans, too, would not mind a return, or even a third fight, if the epic we all expect comes in Las Vegas.