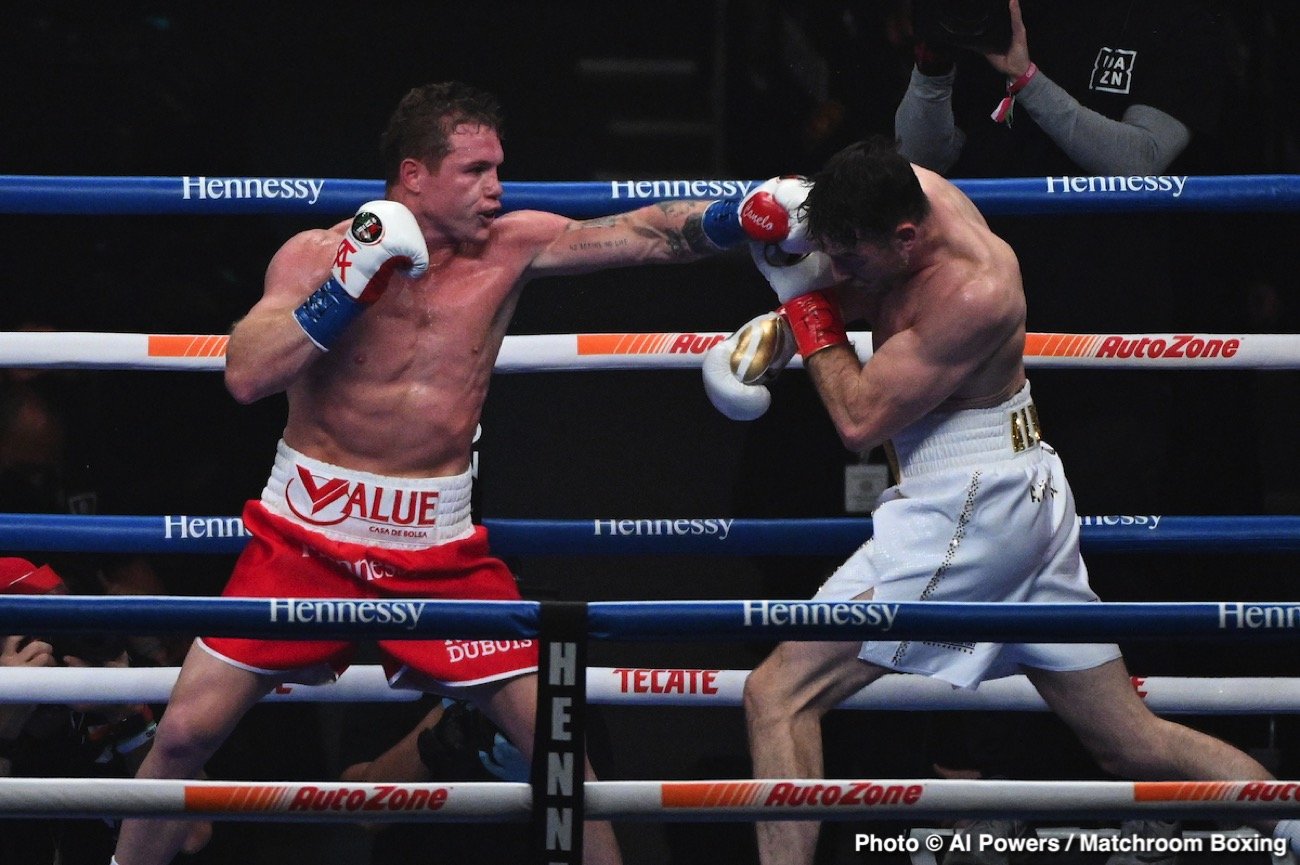 Canelo Alvarez is looking at “making more history,” and the 30 year old feels he has years ahead of him in the sport. But as of now, when asked to name the “most important fight” he has undertaken since going pro at the young age of just 15, Canelo had a quick and firm response.

The Mexican superstar was asked the question of what he considers to have been his most important fight when he and his trainer Eddy Reynoso sat down with TUDN, and the four-weight champ did not hesitate.

Fans might be forgiven for thinking Canelo would have said his most important fight was his loss to Floyd Mayweather. Canelo, currently 54-1-2(36) has said many times that that fight, that defeat, aided him enormously in becoming the mature and experienced fighter he is today.

Canelo has said many times how he learned so much during those 36 largely one-sided minutes (the fight somehow scored a majority decision win for Floyd, the draw of a card handed in a by a judge who deserves to be forgotten).

Or maybe fans would have expected Canelo to list one of his two duels with Gennady Golovkin as his most important fight; either the drawn first encounter, or the decision win Canelo picked up in the rematch. GGG is, in the opinion of almost everyone, Canelo’s fiercest, most bad blood rival – the two having unfinished business still.

But no, Canelo says the decision win over Cotto, from back in November of 2015, which brought him the world middleweight title, is his most important victory to date. It was of course a big win for the then 25-year-old Canelo.

Alvarez boxed very well (as did Cotto, with more than a few fans feeling the Puerto Rican great was hard done by with those wide, 119-109, 118-110, 117-111 scorecards), and he showed in that fight how he had what it took to bounce back from the heavy defeat to Mayweather.

In this respect, and in terms of becoming the lineal, Ring Magazine and WBC middleweight king, it’s not too hard to see why Canelo holds this fight up so highly.

In terms of his future, Canelo wants to unify the super-middleweight titles and fight on for another six or seven years. Canelo told TUDN that, “two months between fights is enough time, and I’m very ready to fight.”

How many more important, and historic, ring victories can Canelo achieve before his enormously successful career comes to an end?

4 thoughts on “Canelo Alvarez Has Listed His Most Important Fight To Date, And He Didn’t Pick Mayweather Or Golovkin”