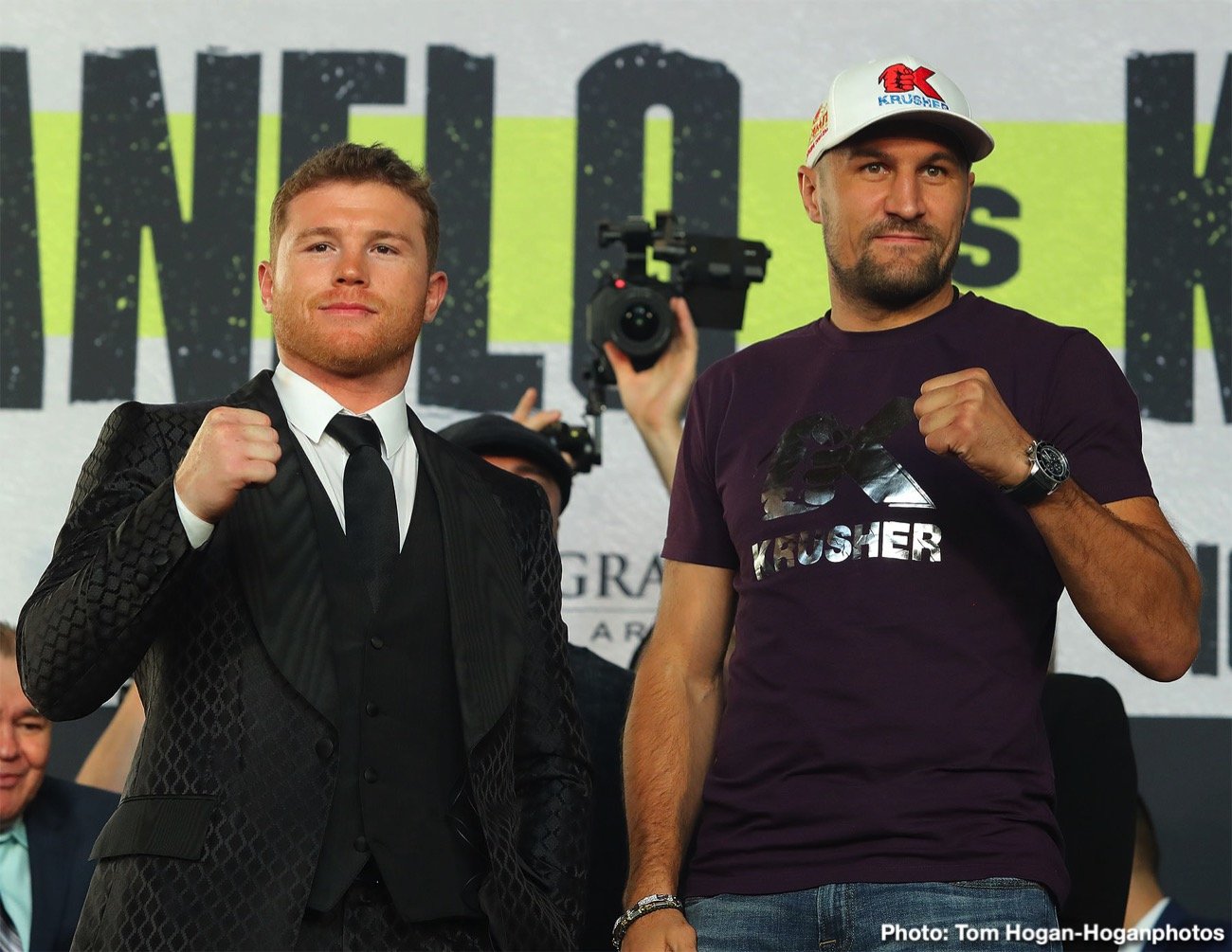 The odds-makers have installed Saul Canelo Alvarez as an early 4 to 1 favorite to defeat WBO light heavyweight champion Sergey ‘Krusher’ Kovalev on November 2. Canelo (52-1-2, 35 Kos) is looking to win his fourth division world title in taking on the 36-year-old Kovalev (34-3-1, 29 KOs) for his WBO 175-lb strap on DAZN at the MGM Grand Garden Arena in Las Vegas, Nevada.

It’s almost unheard for a fighter to the favorite in moving up two weight divisions. You don’t see that kind of thing unless the fighter is exceptionally talented and/or the champion vulnerable. In this case, we’ve got both of those things in play for this fight. Kovalev is badly flawed, old and ready to be picked off by almost anyone, and Canelo is highly talented.

Canelo is considered the #1 middleweight, although some boxing fans would argue that he never proved that due to his 2 fights with Gennady Golovkin ending in controversy. Hopefully, there’s no controversy involved in Canelo’s fight with Kovalev, because boxing fans need a break from that. Last Saturday’s controversial fight between Tyson Fury and Otto Wallin was another black eye for the sport.

Canelo-Kovalev needs a conclusive ending without the taint of suspicion of favoritism by the officials. With Canelo’s track record in Las Vegas, it would have been better if the Kovalev fight had been taken to a different state. Canelo has been involved in three controversial decisions in Las Vegas against GGG [twice] and Erislandy Lara.

The 29-year-old Canelo is looking to become a four-division world champ. That’s been accomplished by the following Mexican fighter:

Even if Canelo captures a fourth division world title against Kovalev, he’ll have a ways to go to equal what his promoter Oscar De La Hoya accomplished in winning six division world titles. For Canelo to do that, he would need to win world titles at cruiserweight and heavyweight. It’s highly unlikely that Canelo would have success at making that a reality.

Considering how barren of talent the cruiserweight division is today, it’s possible that Canelo could move up to that division and win a world title, but he would need to be selective in who he faces. It’s doubtful that Canelo would beat IBF cruiserweight champion Yunier Dorticos or WBO champ Mairis Briedis. Canelo would likely be bombed out of there by those guys, and he might be able to pick and choose a weak champion to pick up an easy title.

Did Canelo pick Kovalev because he’s perceived as weakest link among 175 pound champs?

Some boxing fans believe that’s what Canelo is doing in selecting Kovalev to try and win a fourth division world title at 175. The other three light heavyweight champions – Artur Beterbiev, Oleksandr Gvozdyk and Dmitry Bivol – would all likely be big favorites to beat Canelo. Unlike Kovalev, they’re not old, flawed and losing frequently. Kovalev has lost three fights in the last three years. That right there shows you that he’s vulnerable and ready to be beaten yet again.