Eddie Hearn says Canelo Alvarez told him that he “100% beats Usyk” when he was speaking to him about advice for Anthony Joshua to try and defeat the unbeaten IBF/WBA/WBO heavyweight champion Oleksandr in their rematch in July.

Hearn says he’s not thinking of setting up a fight between Canelo (57-1-2, 39 KOs) and the talented Usyk (19-0, 13 KOs). This was merely Canelo throwing in a comment about his belief that he could beat Usyk if he drained down to 201 lbs.

Realistically, Canelo has no shot at beating Usyk, even a weight drained version of himself.

Watching how Canelo struggled against a faded shot to the gills Sergey Kovalev in 2019 and labored to beat Caleb Plant, Danny Jacobs, Billy Joe Saunders, and Gennadiy Golovkin, he has no chance of beating Usyk.

Canelo will be lucky if he doesn’t get beaten this Saturday night when he challenges WBA light heavyweight champion Dmitry Bivol in their main event fight on DAZN PPV at the T-Mobile Arena in Las Vegas.

Once Canelo loses to Bivol, it’ll be pointless to bring up Usyk as someone he can challenge in the future.

Canelo has gotten away with fighting out of his natural weight class of 160 due to the pedestrian-level champions he fought last year. You can argue that if Canelo had fought David Benavidez last year, we wouldn’t be discussing the possibility of him fighting Usyk one of these days.

Also, there would be no Bivol fight on Saturday because it would be silly to think of Canelo challenging for a world title at 175 after losing two or three fights against Benavidez.

I say two or three fights because Canelo would want at least one rematch against Benavidez after he was to get beaten by him.

“It’s realistic, but it’s not on the radar or the agenda,” said Eddie Hearn to Fight Hub TV about Canelo Alvarez, saying he can beat Oleksandr Usyk at 201 pounds.

“That really came from a conversation I had where he said how AJ could beat Usyk,” Hearn said about Canelo. “I said to him, ‘You sound confident. Do you think you can beat Usyk?’ And he said, ‘100%.’

“He said, ‘If that pound were made at cruiserweight or a pound over, I would beat Usyk,’ and that was the conversation. It’s not like we’re reaching out and negotiating. I believe AJ is going to beat Usyk [in July], but in time, who knows what’s going to happen?

“It just shows you the level of confidence of the man [Canelo] has. This weekend, he’s in a weight class [light heavyweight] that he has no right being in at 175, to be honest.

“It’s like, ‘No one can beat me at 160 and 168, so just keep me going to keep giving me these tests.’ I’m not going to talk about that publically,” said Hearn when asked what tips Canelo gave him for Joshua to defeat Usyk.

“I can’t because it’s been great advice that he’s had. He [Joshua] was there with Canelo and Eddy Reynoso and were talking about it last November or December.

“Really, the conversation was Canelo beats Usyk. It’s not; he asked me to make the fight. It’s just that he believes he’d beat Usyk.

“Then you’ll see the undisputed fight,” said Hearn when asked if he’ll bring up the idea of making the Usyk vs. Canelo fight if Oleksandr defeats Joshua in their rematch in July.

“So, we’re talking about him [Canelo] fighting at cruiserweight, but who knows? One thing you know about Canelo Alvarez is to expect the unexpected.

“We get on great; we have a great relationship, but the deal has got to be right. He won’t let promotional network rivalries get in the way of creating his own legacy, which is admirable,” said Hearn about Canelo. 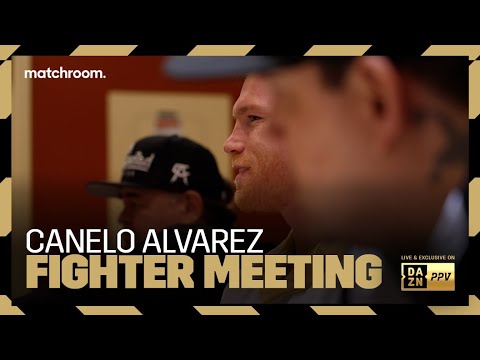