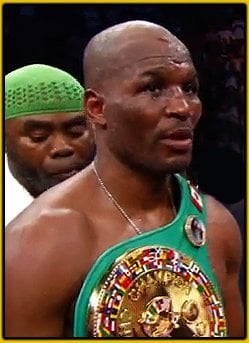 by Geoffrey Ciani – In the sport of boxing it is not uncommon to see a truly great boxer hang around for too long. This largely stems from the fact that it takes a very special athlete with an unrelenting mindset to excel and become a dominant world champion. Among other things, it takes courage, confidence, determination, and the ability to maintain one’s composure and overcome adversity in the heat of battle. It also requires a great deal of consistency, dedication, and sheer willpower. These are key ingredients in the mental makeup of any elite fighter. Unfortunately, these very same traits that enable standout boxers to regularly succeed at the highest level are also the exact same that can get them into trouble later in their careers when their physical tools have eroded. Remarkable champions throughout boxing history have often suffered this fate, and Roy Jones Junior represents a good recent example.

Bernard Hopkins just turned 48 in January. That is considered old in any professional sport, and by boxing standards it is absolutely ancient. Nevertheless, even at age 48, Bernard Hopkins still remains a formidable force. He is not some old gatekeeper just looking to cash out on his name. He is actually still competing at a championship level and always making strong accounts of himself. Sure, he has suffered some losses, and he has also begun to show his age a bit more with each passing year. But to this day, Bernard Hopkins has still never been dominated inside the squared circle, and for someone who has been campaigning at an elite level since early-on in the first term of former President Bill Clinton—well, that is an absolute marvel! It is simply mindboggling stuff.

In my eyes, Bernard Hopkins has only truly lost three fights since his debut, and those were his first meeting with Jones (which I scored 116-112 for Roy), the first fight with Jermain Taylor (that I had 115-113 for Jemain), and his most recent loss to Chad Dawson (where I had it 115-113 for ‘Bad’ Chad). I also felt he deserved a victory in his first bout with Jean Pascal, which was ruled a draw (I had it 114-112, Hopkins). Of course my scorecards are by no means official; they simply reflect one man’s opinion. That said, according to the actual decisions rendered by the judges, Bernard was also beaten by Taylor in their rematch (I had it 116-112 for Bernard), and he lost to Joe Calzaghe (which I scored 114-113 for Hopkins). These were both close fights that were not necessarily easy to score, especially the Calzaghe bout, but in my view Bernard grinded out enough rounds to take both contests. The point here still remains constant though: Bernard has always fought competitively, even the two times he clearly lost when he first faced Jones and most recently lost to Chad. Simply put, no man has ever beaten up Bernard Hopkins in professional prizefighting.

On March 9, Bernard is challenging undefeated IBF champion Tavoris Cloud, and this will afford him yet another opportunity to defy the odds and make history. Bernard, of course, is no stranger to making history or shocking the boxing world as a heavy underdog. In fact he is probably best known for scoring big upset wins against Felix Trinidad (Sept. 2001), Antonio Tarver (June 2006), and Kelly Pavlik (Oct. 2008). He is also firmly established in the boxing record books compliments of his impressive 20 consecutive title defenses in the historically prestigious middleweight division. Most recently he etched his name into history when at age 46 he became the oldest fighter to ever win a major world championship after defeating Jean Pascal in their May 2011 rematch. This broke the previous mark set by then 45 year old George Foreman when he scored his famous knockout against Michael Moorer in November 1994.

Can Bernard Hopkins again make history and break his own record, once more becoming the oldest boxer to win a championship, this time at age 48?

Many fans feel this is a tall order, and even the oddsmakers have Hopkins pegged as the underdog. The common perception here seems to be that Bernard looked dull and lethargic in his nearly 14 rounds of action against Chad Dawson. A lot of observers simply do not believe Hopkins has the stamina or reflexes anymore, especially since he is up against a young hard-punching high-volume guy like Cloud. This overlooks a couple of factors, however, which is simply amazing given that less than two short years ago Hopkins was riding high and had arguably reached the zenith of his illustrious career.

One thing people need to remember is that Hokins’ boxing IQ is by no means limited to what he does inside the squared circle. Better than anyone, Hopkins knows his own limitations as he has aged, and he has worked arduously to perfect the art of what he still can do, and one of the things he can still do is choose wisely when it comes to selecting relevant opponents whom he matches favorably against. Bernard is surrounded by extraordinary boxing minds, Nazim Richardson chief amongst them, and he has a brilliant boxing mind in his own right. There was a reason behind Hopkins’ decision to jump two weight classes and chase down 175 pound king Antonio Tarver. There was a reason Hopkins pounced on the opportunities to face Kelly Pavlik and Jean Pascal when they each arose respectively. And there is also a reason why in recent years, Hopkins made a strong push to face guys like Lucian Bute (before he was bludgeoned by Carl Froch) and Sergio Martinez.

Conversely, there was also a reason why he was never overly eager at the prospects of facing Chad Dawson. It had nothing to do with the erroneous view some fans have held, that Hopkins “feared” Dawson. That is and always was nonsense. This was all about Bernard understanding what both him and his potential foe were capable of, and Bernard knew that Dawson possessed the physical tools and style that would make it less favorable for him to shine and more difficult to grind out a victory. Simply put, he saw things in guys like Bute, Pascal, Tarver, Pavlik, and Martinez that he believed he could exploit and capitalize on—things he did not see in Dawson. And Chad was never a big name that commanded big money to begin with, so Hopkins being the genius he is at selecting opponents had no reason whatsoever to actively seek that fight. When Hopkins and Dawson were both angling to secure guaranteed rematches each had with Pascal, Hopkins was given the nod to get first crack with the condition that he must face Dawson should he win. It was only then, when he was afforded a second opportunity to make history, that he finally (and probably somewhat reluctantly) agreed to the prospects of facing Chad.

So forget the Dawson fight. Throw it out the window. Hopkins himself had already known Chad’s style would be more difficult for him to exploit, and even then Bernard still made a good account of himself. In fact, he was doing well early and appeared to be getting into Chad’s head before head trainer Iceman John Scully reeled him in and helped Dawson regroup and focus. The important thing for the boxing world to remember here is that Tavoris Cloud is no Chad Dawson. That is not to say that Cloud could not perhaps beat Dawson, but in terms of styles they are night and day. Cloud lacks the technical consistency, timing, and accurate jab Dawson utilized to trouble Hopkins. Cloud is far more reckless, which often leaves him off balance and out of position. The evidence of this is abundant in all of Cloud’s fights, and in particular his most recent controversial split decision victory against Gabriel Campillo last time out. Hopkins sees something here, and when he sees something it is usually for good reason.

The one important question that really needs to be answered is the same one that some have been asking for more than a decade now: Will Bernard Hopkins grow old overnight?

Amazing to think this question has been floated about since around the time he beat Trinidad. But one of these days it has to happen, right? I mean Bernard is 48 years old now. Even Bernard himself has often acknowledged the fact that no one beats Father Time. He knows he is racing against the clock. Will his time finally arrive when he faces off against Tavoris Cloud, and worse yet, could Cloud administer a beating on Hopkins the likes of which we have never seen? Hopkins is a modern day ageless warrior whose dedication and life style has enabled him to long escape the ill fate suffered by many boxing greats who have hung around for too long. But is Bernard pushing his luck? Should he have gracefully bowed out following his spirited losing effort against Dawson? Will Tavoris Cloud become the first man to beat up the great Bernard Hopkins in a prizefight?

The situation that presents itself here in the lead-up to Hopkins-Cloud is eerily similar to predicaments we have already seen from the past. Prior to his bout with Antonio Tarver, fans were harping on Hopkins’ losses to Jermaine Taylor. Before his fight with Kelly Pavlik, observers were fixated on Hopkins losing effort to Calzaghe. Even in the build-up to the first Pascal fight, attention centered on his ugly win against Roy. And now going into his match against Cloud, many members of the boxing community are strictly focused on the difficulties Dawson provided him. Fool me once, shame on you; fool me twice, shame on me! Hopkins has already pulled this rabbit out of his magic hat several times before, and the way some fans are counting him out now feels like Déjà vu all over again. After all, Hopkins has proven repeatedly that he should never be underestimated.

My early feeling is that if Hopkins is anything close to what he was physically the night he lost to Dawson, he should still have enough left in the tank to outthink and outmaneuver Cloud. One of the telling signs early-on should be how well Cloud withstands Hopkins’ right hand and whether it does enough damage to keep Cloud at a modest work rate. Another thing to look for is how well Hopkins controls the range to maintain his distance in between attacks. If Hopkins can force Cloud to fight at his pace, as I suspect he can and will, then look for Bernard to grind one out and once again make boxing history.