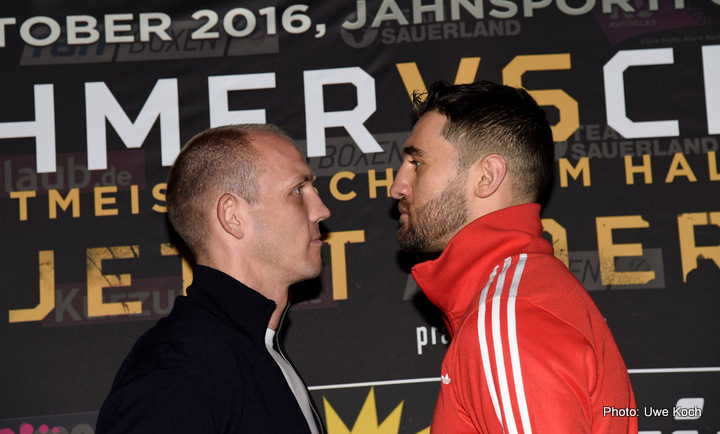 FloSports today announced it has agreed to terms with MP & Silva, an international sports marketing agency, for the live media rights in the United States to the WBA Light Heavyweight title fight Oct. 1 between Juergen Braehmer (48-2) and Nathan Cleverly (29-3). The fight in Hamburg, Germany, will begin at 12:45 p.m. ET between Braehmer, the current title holder, and the former champion Cleverly. The event will stream on FloBoxing.tv.

“We are thrilled to cover this marquee matchup with so much at stake,” FloSports co-founder and CEO Martin Floreani said. “FloBoxing is committed to featuring the best boxing content in the world, and title fights like these help us achieve that goal and grow the sport.”

The main event will be the seventh defense of Braehmer’s WBA regular light heavyweight world title. It is the first title opportunity for Cleverly since being defeated for the WBO title by Sergey Kovalev in August of 2013. The promotion is presented by Team Sauerland.

“We are delighted to partner with FloSports to digitally broadcast Team Sauerland boxing events in the United States,” Frank Uddo, President, North America, MP & Silva said. “This is a great partnership benefitting all parties involved, especially the American boxing fan. Team Sauerland entrusted MP & Silva, a leading international media rights company, to increase the distribution and reach of its boxing brand worldwide, and we believe FloBoxing is the perfect, focused platform to promote their content to a truly dedicated boxing fan-base.”

The German-born Braehmer has won 17 consecutive fights since his last loss in 2008, while British-born Cleverly is coming off a “fight of the year” performance in a narrow defeat to Andrzej Fonfara in October 2015. The two fighters were originally scheduled to meet in 2011, but Braehmer was forced to withdraw after suffering a cut in sparring.

A win for either fighter would put them in the conversation for potential unification fights with either WBC champion Adonis Stevenson or the winner of November’s Andre Ward vs. Sergey Kovalev matchup.

After the conclusion of the card in Germany, FloBoxing will be live streaming an eight-fight card from Grand Casino in Hinckley, Minn., that is headlined by a fight between two of America’s top cruiserweights in Atlanta’s Brian Howard (11-1) and Minneapolis’ Phil Williams (15-8-2).

ABOUT FLOSPORTS
FloSports is a direct-to-consumer, subscription-based sports media company based in Austin, Texas, that partners with event rights holders and governing bodies to unlock a world of sports coverage that true fans have been waiting for. Through live streaming of premier events, original video programming, and weekly studio shows, FloSports is growing the sports, the athletes and the fans. Current verticals under the FloSports header are Wrestling, Grappling, MMA, Elite Fitness, Boxing, Softball, Gymnastics, Marching, Basketball, Volleyball, eSports, Cheerleading, and Track.

The legendary two-weight World Champion, who held WBA (Super), WBC, IBF, WBO and Ring magazine titles during his undefeated forty-six-fight career, believes Cleverly ‘speed’ and ‘work rate’ will prove too much for the German veteran.

‘’This is a great opportunity for Nathan,’’ he said. ‘’Braehmer is a good boxer, but if Nathan fights an intelligent fight, and uses his hand speed and work rate, I definitely fancy him to win.

‘’Nathan is a different kind of fighter, but if he plays to his strengths, I’m sure he can get the job done. He’s come back down to light heavyweight, he had a good fight against Fonfara, and now he’s ready to get back into the World title mix.

‘’He’s away, fighting in Germany, so he will need to start fast and dominate the rounds, as any 50-50 rounds will go to the home fighter, but I still fancy him to do it. We saw Enzo Maccarinelli giving Braehmer some trouble at home before his eye started to swell.’’

Calzaghe, who enjoyed some memorable nights overseas, most notably his 2008 Stateside victories over Bernard Hopkins and Roy Jones Jr, is also the last British boxer to have won a World title fight in Germany against German opposition.

In 2005, the ‘Italian Dragon’ defended his WBO World title against mandatory challenger Mario Veit at the Volkswagenhalle in Braunschweig.

‘’That’s another one for the record books,’’ he says. ‘’Hopefully Nathan can be the man to break that record and bring the World title home.

‘’It was a different type of fight for me. Mario Veit was my mandatory challenger. I had already knocked him out in the first round in Cardiff, and then he won about twelve on the bounce and got himself back into the mandatory position.

‘’I always knew I was going to knock him out again, and he went six-rounds the second time, but as I said it was a different situation for me. I came to Germany as the favourite, I dominated from the start and the crowd was pretty subdued. I expect that to be different for Nathan. He has to go over there and take the title from the Champion.’’

The WBA World Light Heavyweight contest between Juergen Braehmer and Nathan Cleverly will be shown live on SAT.1 in Germany and Sky Sports in the UK.