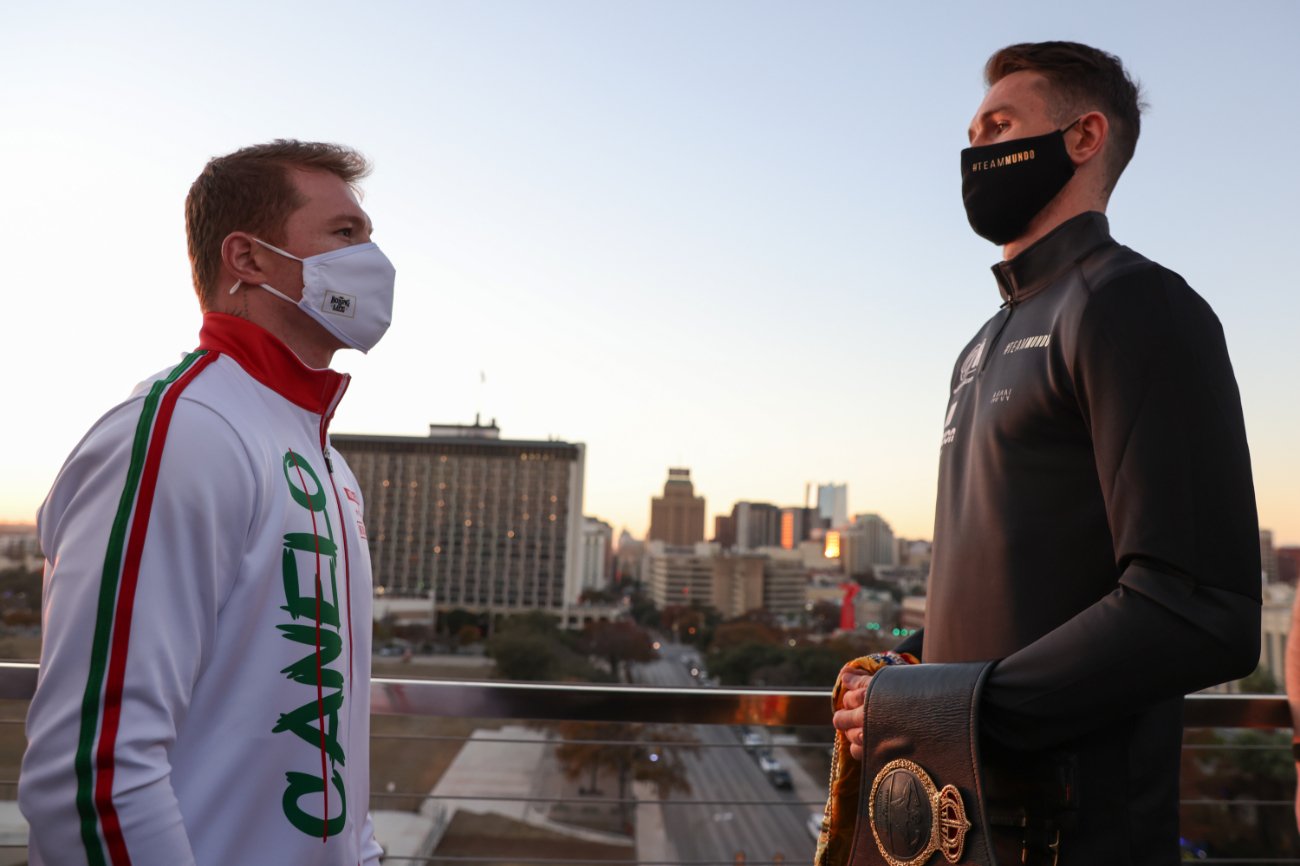 Paul Smith predicts that his younger brother Callum Smith (27-0, 19 KOs) will impose his massive size advantage over the tiny Canelo Smith (53-1-2, 36 KOs) and knocked him out cold on the canvas this Saturday night at the Alamodome in San Antonio, Texas.

Paul views the Canelo vs. Callum fight as similar to the recent Vasily Lomachenko vs. Teofimo Lopez fight.

In that contest, the former three-division world champion Lomachenko was fighting in a division that he lacked the size to be competing in.

While Loma was able to get away with it for a while due to him facing flawed fighters at 135, but when he finally went up against a big lightweight with talent in Teofimo, he was beaten up and dominated.

Paul sees Canelo as someone that doesn’t belong at 168, and he’s gotten away with it thus far because he’s only fought two pedestrian level fighters in the weight class in Julio Cesar Chavez Jr and Rocky Fielding.

Canelo moved up to 175 and defeated Sergey Kovalev to relieve him of his WBO light heavyweight title. 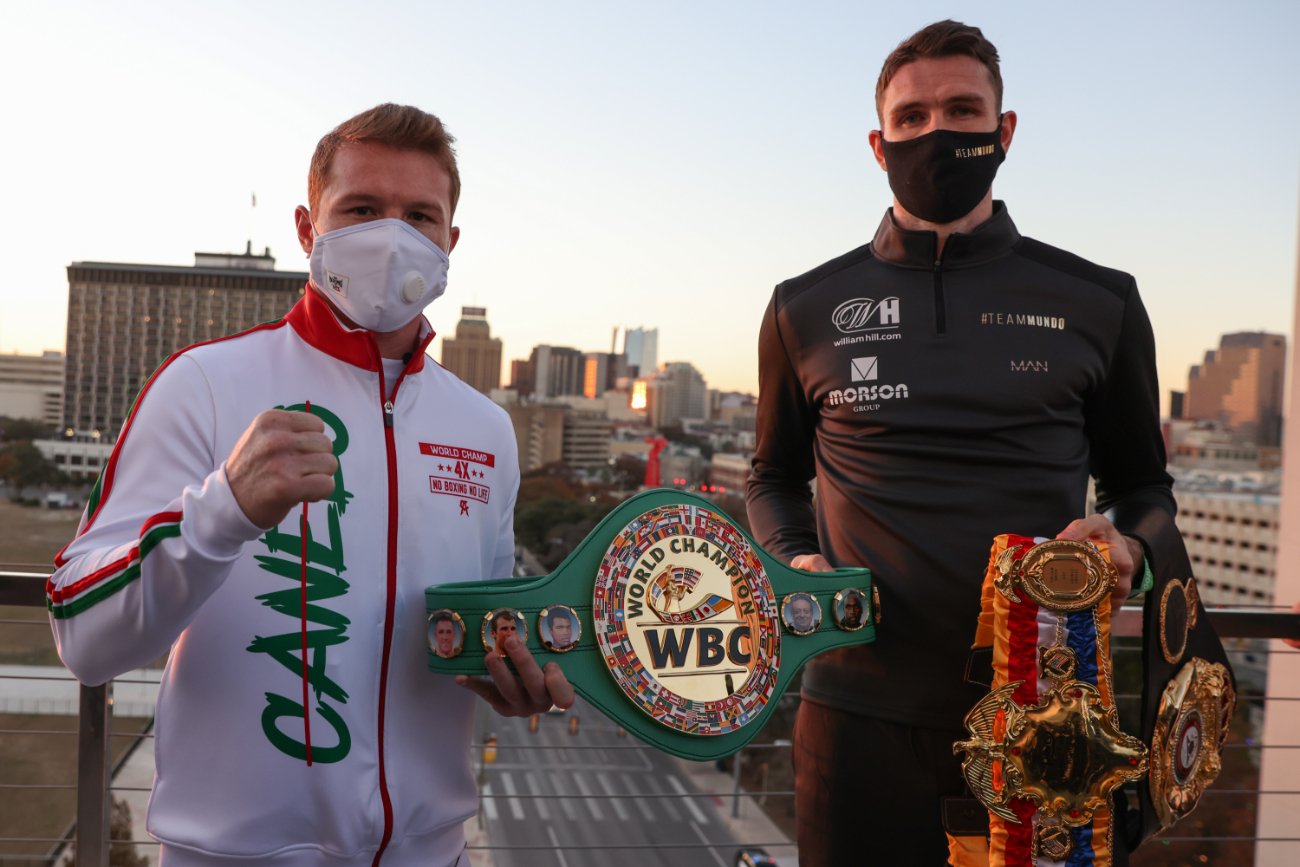 He can bang, he can mix, and he’s fit. He’s strong, and he’s #1 in the division. Canelo is made for him. Callum might be as well. It’s one of those fights.

He’s massively confident. There’s not one shred of doubt in his mind. I see Callum knocking Canelo out cold and closing the show with a highlight reel knockout, which we know he’s capable of doing. I’m massively confident, and the game plan that he’s been working on in the gym looks brilliant.

“There are no problems with the weight,” Paul said of Callum. “He’s not had to kill himself every day with sessions. He’s had days off. He’s looking excellent. Mentally, I’ve never seen him this focused.

There’s a good argument that you can make that Callum IS going to knock Canelo out and show that he does not belong at 168 fighting elite-level guys like the humongous 6’3″ Smith.

Is that just an accident that Canelo hasn’t fought those talents or has purposefully avoided them so he wouldn’t beat by as he did against Gennadiy Golovkin and Floyd Mayweather Jr?

Many people feel that Canelo deserved to lose to Golovkin in both fights and against Erislandy Lara and Austin Trout. On Saturday, Canelo will have problems winning by another controversial decision because of Callum’s huge size and power. 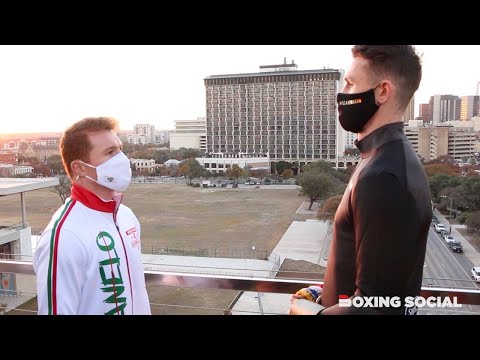 Callum’s plan is to take the judges out of the equation by knocking Canelo out unless he runs for 12 rounds. Canelo lacks the mobility to get away, and Callum won’t be satisfied with jabbing him all night as Lara and Mayweather did. 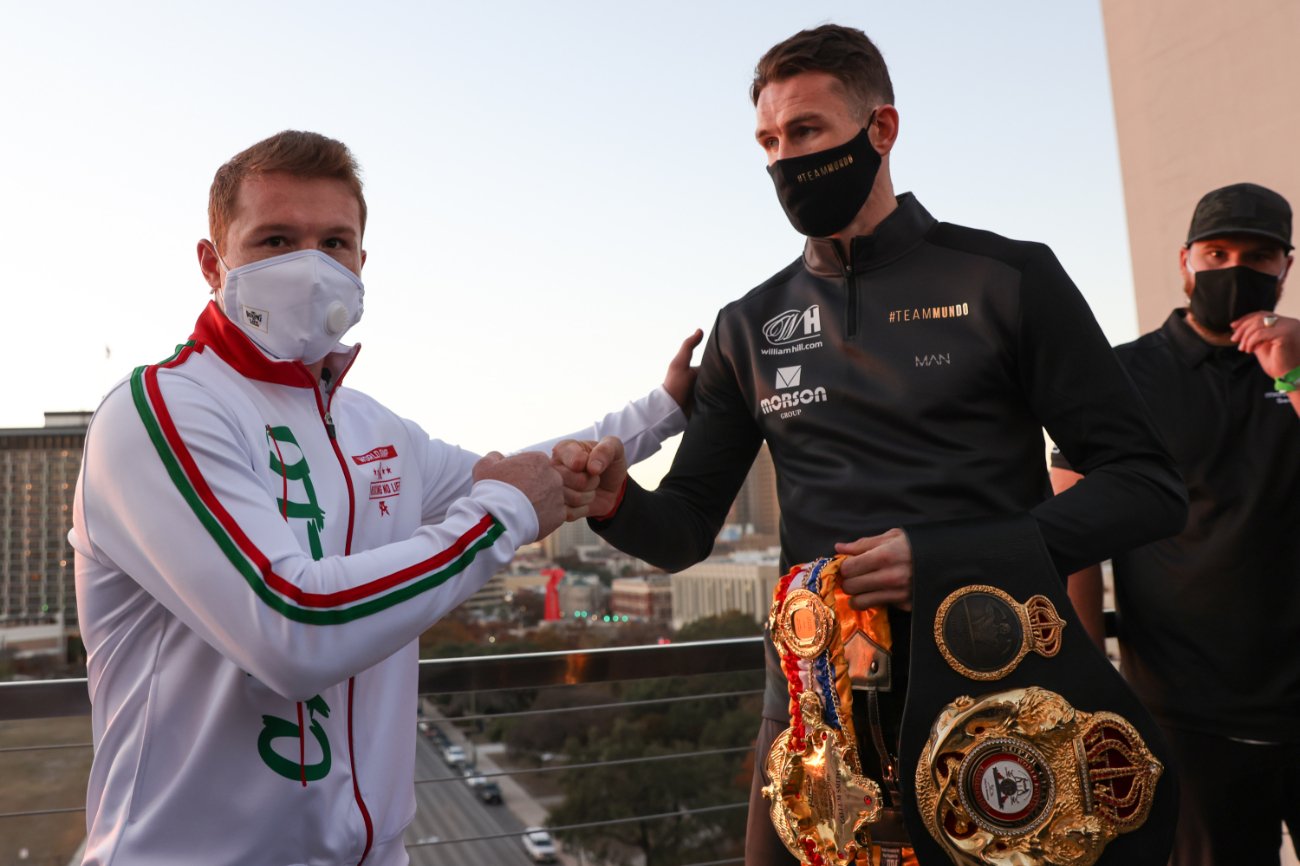 “I think Lomachenko bit off more than he could chew,” Smith said in comparing Lomachenko with Canelo as far as taking on an opponent that was too big for him.

“He tried to move through the weights and came up against a massive lightweight [Teofimo Lopez] when he shouldn’t have been in that division.

“That takes talent and a gift for fighting, and we know he is. Callum probably dislikes him [Canelo] for what he did to Liam in the fight [in 2016].

“It’s not a case of what happened with Lopez and Lomachenko.

“What happened in that fight will probably happen in this fight where Canelo will realize that ‘I can’t bully him and push him off. I can’t do this and that. The shots I could take and ride off with Liam Smith at 154, I can’t take and ride off at 154. he’s a big concussive puncher with skills and ability. It’s not going my way.’ 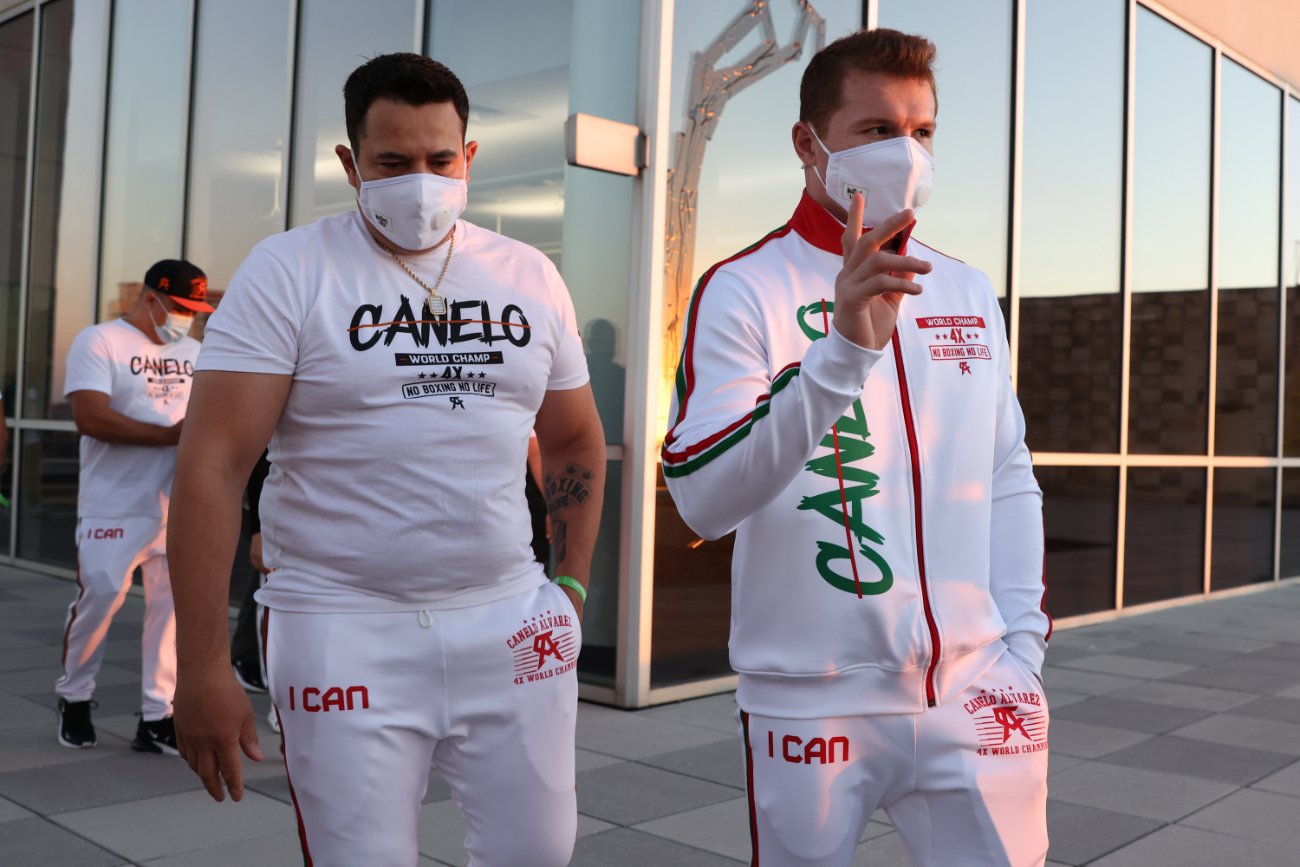 “Mentally, it’s going to ask questions of Canelo, who will have to adapt. Lopez and Lomachenko is a good example because he [Loma] finally realized that this is a step too far.

“He’s not getting any younger, Lomachenko, and neither if Canelo. He’s been a professional for 15 years. That’s a long time,” said Paul.

You can definitely draw parallels between where Lomachenko was at with him fighting in a weight class that his body didn’t support at 135 to Canelo competing in a division that he’s much too small to be fighting in at 168.

Again, Canelo has gotten away with it thus far because he’s only fought the flawed fighters Chavez Jr and Fielding, and he’s been taking his time getting around to face good opposition.

After Canelo picked up the WBA secondary super middleweight title off Fielding in 2018, he went after an arguably easy mark in Daniel Jacobs, a timid shot fighter, and didn’t throw many punches.

Callum will make massive money in the rematch

“If Callum beats Canelo on Saturday, then the next fight will be the Canelo fight,” Smith continued. “I don’t think Canelo, Matchroom, and the team will let Callum walk away scot-free if he beats him. 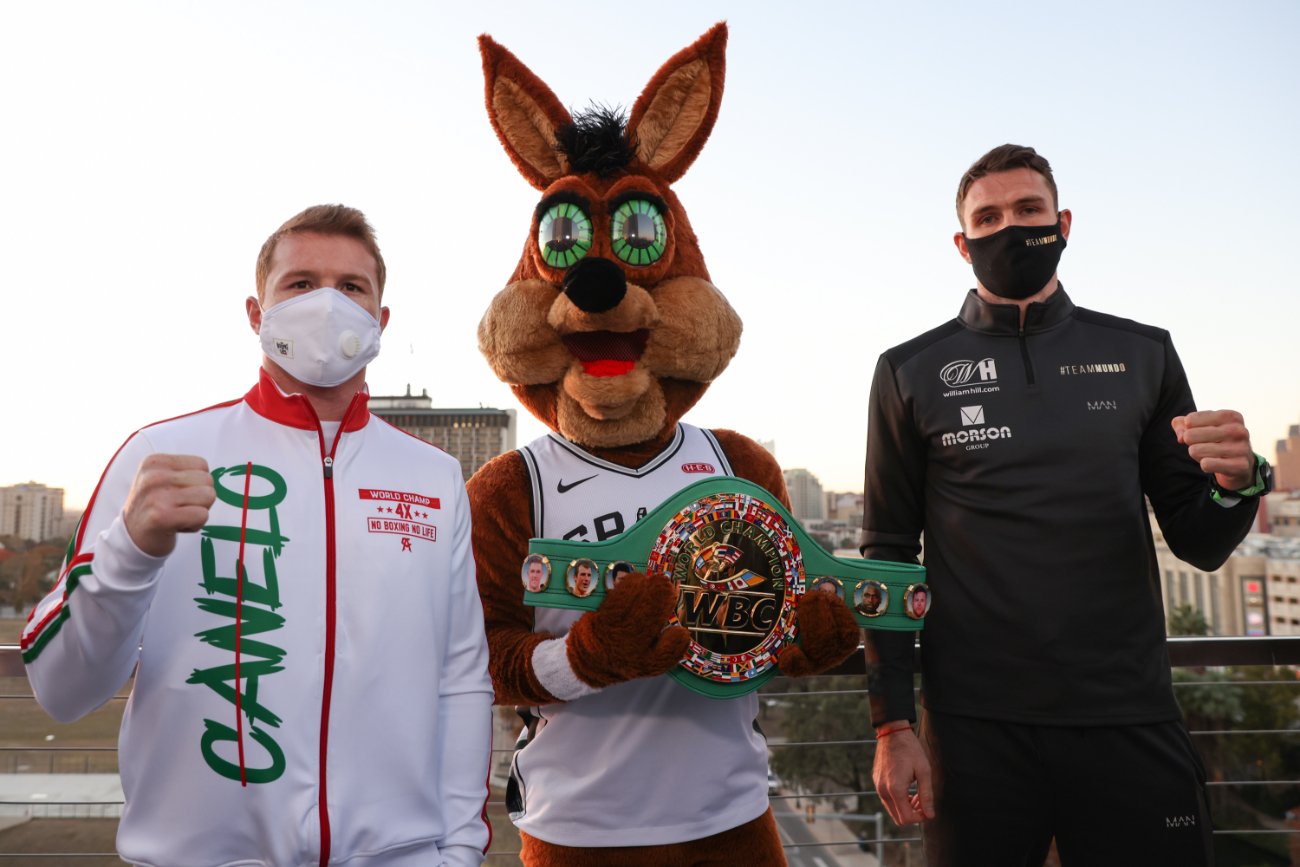 “Why would Callum go fight Billy Joe for a small percentage of the money when he probably gets ten times that fighting Canelo in a rematch.

“If you win that fight, it’s probably three, four times that amount [Callum will make in a rematch with Canelo if he beats him].

“It’s serious money, but you’ve got to make a serious statement first beating him.

“If we get a rematch and Callum wins, Canelo and his team would rightly turn around and say, ‘why to go fight in Anfield with 60,000 when we can fight in Dallas with 100,000?’ We can fight in Vegas. Whatever makes the most money. You go where the money is,” said Smith about a potential rematch between Canelo and Callum.

The green that Callum can make fighting Canelo in a rematch after he beats him will be huge compared to what he would get fighting Billy Joe Saunders or any of the other champions at 168.

The only fight that makes sense or Callum is for him to stay at 168 and face Canelo a second time. If Canelo gets knocked out, it won’t be surprising if he chooses NOT to fight Callum a second time because there would be no way back if the proud Alvarez gets knocked out twice in a row. 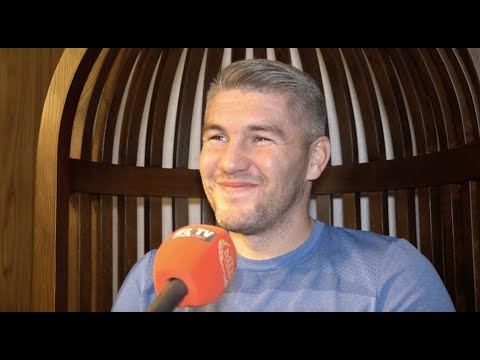 Losing wouldn’t mean that Canelo is a shot fighter. It would mean that he has no business fighting at 168 because he’s tiny and not build for that weight class. Canelo is a super-middleweight champion because he picked an easy mark in Fielding rather than the good champions. Am I wrong?

When Canelo went up to 175 to pick up a belt, did he fight the good champions in Artur Beterbiev or Dimitry Bivol? Nope. Canelo went for the old past his prime champion in 36-year-old Kovalev.