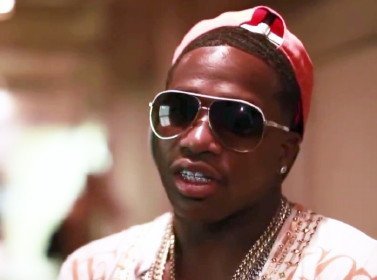 I have attended dozens upon dozens of boxing events, and it’s rare for the crowd to pour in and fill the arena from the earlier part of the affair. With all that being said, it looks like Golden Boy Promotions and Mayweather Jr. Promotions are aiming at reaching that goal by attempting to have both Amir Khan and Adrien Broner on the undercard.

“I will be working on finalizing the card for May 3 and the Floyd Mayweather Super Bowl of Boxing,” Schaefer said to RingTV. “Everybody is asking me whether Broner is going to be on that card, and whether Khan is going to be on the card. Amir Khan and Adrien Broner are two of the biggest names in the sport, and if I would succeed in getting them on the same card, it would be with THE biggest name, Floyd Mayweather,” stated Richard Schaefer of GBP.

He is right, if there was ever a way to get big name fighters to be in an undercard bout, it’s to have the name Floyd Mayweather Jr. attached to it.

“Hopefully, May 3, Amir Khan and Adrien Broner both can be on the undercard to make the card that much more explosive,” declared Mayweather Jr.

While having both Adrien and Amir on the undercard would undoubtedly bring an immense amount of interest in the event, having Khan vs. Broner would elevate the PPV into a whole other level. At this point, this could potentially be a realistic goal, as both fighters have been going at each other via Twitter.

“”On a serious note, I wouldn’t mind beating up Broner. Is that what everyone wants. Me to put broner in his place,” wrote Khan on his Twitter wall.

It wasn’t long before Broner responded, firing back: “Khan ain’t s–t. This for everybody who think all I do is party. I’m ready to beat the f–k out of Amir King Khan.”

This fight would make sense for both men, and would generate much enthusiasm from the boxing community.