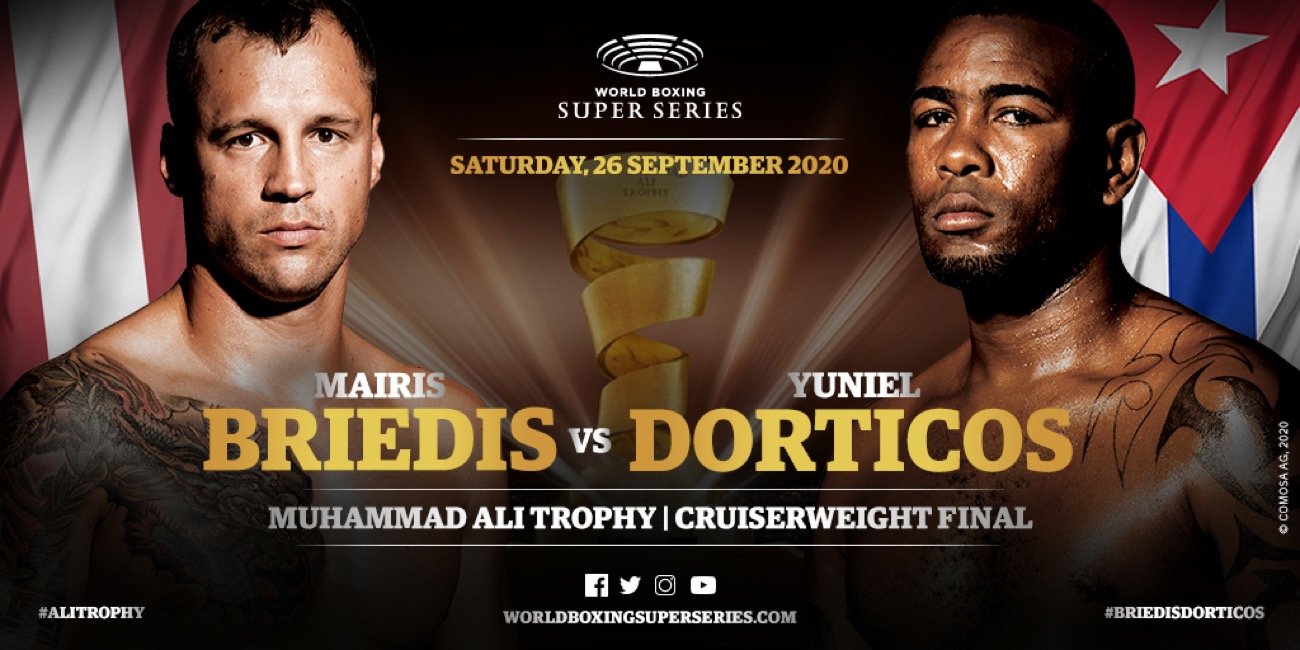 IBF champion Yuniel Dorticos (24-1, 22 KOs) and his entourage touched down safely on Sunday in Munich for his Ali Trophy showdown against Mairis Briedis (26-1, 19 KOs) on Saturday.

“The trip went smoothly,” said ‘The KO Doctor’ at the Franz Josef Strauss Airport. “I am happy to have finally arrived I’m Munich, and I can’t wait for Saturday night to come.”

The Miami-based Cuban has fought in the U.S., Russia, and Latvia across two seasons with the WBSS and covered other parts of the world in his amateur days as part of the Cuban national boxing team.

“I can fight anywhere, and I loved every second of fighting all over the world,” he told.

“I’m very honoured and humbled to be fighting for the Muhammad Ali Trophy here in Munich. I’m going to dedicate it to his memory by winning it and go down in history.

“I am going to bring the Muhammad Ali Trophy, Ring Magazine Belt and my IBF belt to Miami!”

The culmination of the quest for the Muhammad Ali Trophy will be held in a television studio under Covid-19 rules and with no spectators at Plazamedia Broadcasting Center, a leading live sports production house in Munich.

“We are thrilled to announce the date and place for the exciting finale of Season II of the WBSS,” said Andreas Benz, CEO of Comosa AG, organiser of the World Boxing Super Series.

“Plazamedia is a phenomenal solution, the studios are providing a controlled environment which is of huge benefit to us and the production team to keep everyone safe while also putting on a great show.

“At the same time, we have done everything to secure fair conditions for both teams, and to ensure they remain healthy and isolated until the action starts.”

Maris Briedis, tournament No. 1 seed, qualified for the final through wins over Noel Mikaelian (UD) and Krzysztof Glowacki (TKO3), while Dorticos, No. 2 seed conquered Mateusz Masternak (UD) and Andrew Tabiti (KO10) to enter the 200 lbs decider.

“We are very happy about the announcement of the final,” said Latvia’s Mairis Briedis. “I love the fact that it will be in Munich as it reminds me of every time I went to train with the Klitschko brothers in Germany and the flights were always via Munich. Those are some great memories of the time spent with them there!”

Said Miami-based Cuban, Yuniel ‘The KO Doctor’ Dorticos, IBF World Cruiserweight Champion: “To all my fans worldwide, in Europe and especially in Munich, Germany: I am super happy the World Boxing Super Series final will take place in Munich, Germany, and I will see you all on Saturday, September 26th. The KO Doctor is back and ready to prescribe another dose of pain and take the Muhammad Ali Trophy back to Miami!”

Kalle Sauerland, Chief Boxing Officer of the WBSS, said: “On 26 September we will not only crown the best cruiserweight on the planet but also send a sign to the world that boxing is back with the first major transatlantic Championship bout between the undisputed number one and two in their division.

“The final is not only about honour and glory, but cementing a legacy. The winner will become a member of an exclusive ‘Ali Trophy Winner Club’ that includes Aleksandr Usyk, Callum Smith, Naoya Inoue, and Josh Taylor. It doesn’t get much bigger in boxing, and we expect Briedis and Dorticos to have an absolute barnstormer!”

The final will be shown live on DAZN in the U.S. Fans can visit DAZN.com or download the DAZN app to their preferred connected device.

The Muhammad Ali Trophy is also known as the Greatest Prize in Boxing and it is being awarded to the winner of each weight class of the World Boxing Super Series. Ali gave his blessings to the WBSS and agreed to give his name to its prize created by the late world-renowned artist Silvio Gazzaniga who also designed the iconic FIFA World Cup Trophy.