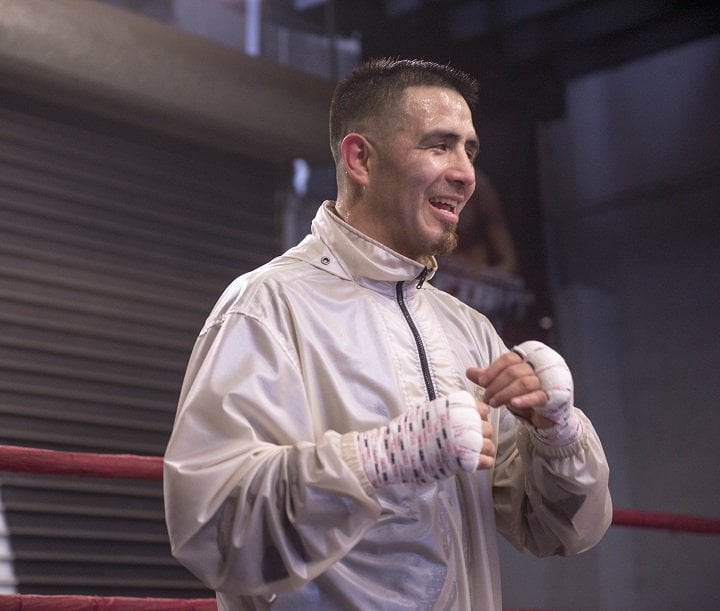 Here is what the fighters had to say Wednesday from NGBA Boxing Gym:

“I’m training really hard and I’m ready to get back in the ring. My weight is perfect right now and I’m just ready to give the fans a great show.

“This is the kind of fight that I asked for because I know that beating a guy like Danny Garcia will mean a lot to my career and put me on the fast track to accomplish my goals.

“Danny has a lot of power on his hook. He throws it hard and is accurate. We’ve worked hard to prepare for this moment and I’m excited.

“Having Robert Garcia here makes me much happier in training. I love the instructions from him and Donald Leary, and I love having them as my corner. Sparring the young guys in Robert’s gym really has helped me. Those guys are hungry and always pushing to prove themselves. I have to keep elevating my game.

“As long as I beat Danny Garcia, I know that it puts me back to the top of this division. I’m here again and I’m doing it right this time. I want to make the most of this part of my career. I don’t want to ever wonder ”what if?'”

“We’re expecting to fight the best version of Danny Garcia. I know he had his first loss and wants his title back, so he’ll be prepared. I think we’re going to give the fans a great show.

“I feel rejuvenated and more mature than ever before. I’ve already been to the top. I just want to do things right this time so I can get back up there and stay there. I’m taking this camp very seriously to be at my best on February 17. I’m going to go out there and execute the game plan.

“We’re going to give 150 tickets to first responders of the Las Vegas incident last year and it means a lot to me and my whole team. Those men and women work very hard and put their lives on the line to protect us all around the world. It means a lot to me for them to come to this show.”

“For this fight Brandon has been so motivated and training so hard. He’s very close to weight already and we’ve had more than enough rounds of sparring.

“Brandon is like my little brother and he’s definitely part of the family. I’ve always been in touch with him even when I wasn’t training him. When we agreed to team up again, the promise was that he had to stay healthy and train hard and show us that he wants to be champion again. Since that day, he’s been on a mission. He’s doing it the right way.

“Danny Garcia is a great two-division world champion. We expect him to be confident and I’m sure he’s training hard to get a good win. Brandon is going to be motivated to give everyone a great fight. His mind set is to go out and beat Danny Garcia and that’s what he’s going to do.

“Brandon is training hard to do what people don’t believe he can do. His confidence is like never before. I see the same Brandon that we’ve seen in the best moments of his career.”