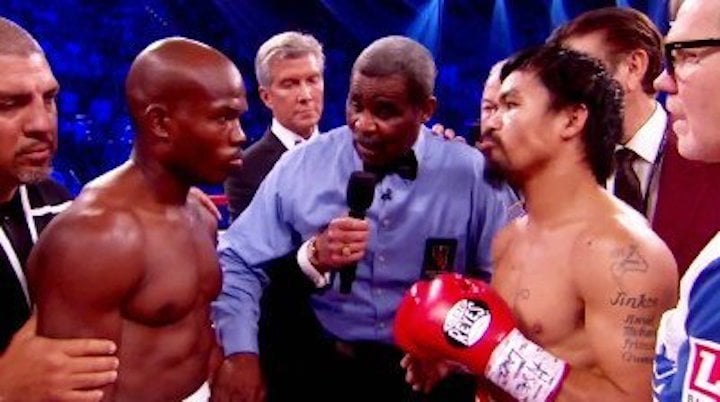 Some people, industry folks and boxing experts mostly, called it the most controversial decision in modern day boxing history. Plenty of ringside observers, established journalists, experts, know it alls, and TV pundits had Manny Pacquiao an obviously clear winner, with scores of 119-109, 118-110 and 117-111 all over the place.

But something completely unexpected happened, and when it happened, it sent the entire global boxing media into an absolute frenzy. Timothy Bradley won the fight that contested the WBO welterweight crown. At least he was awarded the decision.

It was eight years ago today in Las Vegas, Vegas being the scene of so many controversial boxing decisions/fights/outcomes. But this was different. As in death threat different. Bradley, in taking the split decision and defeating the beloved Manny Pacquiao, had triggered something nasty. No-one believed Bradley had won or had deserved to win. Pacquiao had not lost in seven long years. How could such an outrage occur!

Pacquiao appeared to dominate the fight: he was the aggressor, he landed more punches (253 to Bradley’s 159 as per Punch-Stat accounts), he hurt Bradley more than once, while he himself was never hurt in the fight, and he was Pac-Man. The MGM Grand erupted when the scores came out, when Bradley’s stunner of an upset victory was announced.

“What the hell just happened?” – Geoffrey Ciani, East Side Boxing

“A stunning slight to punch statistics – and the naked eyes of most everyone,” – Lance Pugmire, Los Angeles Times.

“Stunning, simply stunning. Pacquiao had spent virtually all of the fight beating Bradley to the punch, strafing him with power shots from both hands and visibly rocking him on multiple occasions,” Dan Rafael, ESPN.

“It takes a lot to shock the sport of boxing but it happened on Saturday night in Las Vegas,” John Duerden, The Diplomat.

“Nothing more needed to be said, as the boxing world was flipped on its axis,” Jake Donovan, BoxingScene.

“That decision was a crime,” Harold Lederman, HBO.

“In live wagering, during the period between the end of the fight and announcement of the decision, the odds of Bradley winning were at an astronomical 200 to 1. 200 to 1!” Sean Pendergrast, Houston Press.

“The most surprising megamatch decision I have ever seen,” Michael Woods, The Sweet Science.

Okay, you get an idea of how shocking this decision was. However, Bradley was not without some support – Thomas Hauser, for one, being in favor of Bradley, scoring the fight for the challenger (by a margin of one point). Also, some experts who had Pacquiao winning had him winning by just two or three points. And some time after the fight, a video emerged on YouTube, the content doing a fine job in persuading the viewer that, yes, Bradley had in fact deserved the win.

Bradley by this time had received death threats and he was considering quitting the sport. All these years later, ask yourself (after viewing the fight again) – was this decision really the absolute disgrace it was made out to be? Maybe you think so, or maybe you have watched the fight with the sound off (something that can drastically alter the viewer’s perception of who won a boxing match) and have calmed down some number of notches since that June day in 2012.

Pacquiao got his revenge, twice, in subsequent rematches with Bradley, yet for many, too many, the damage had been done.

When an enraged boxing world screams, it sure screams loud.