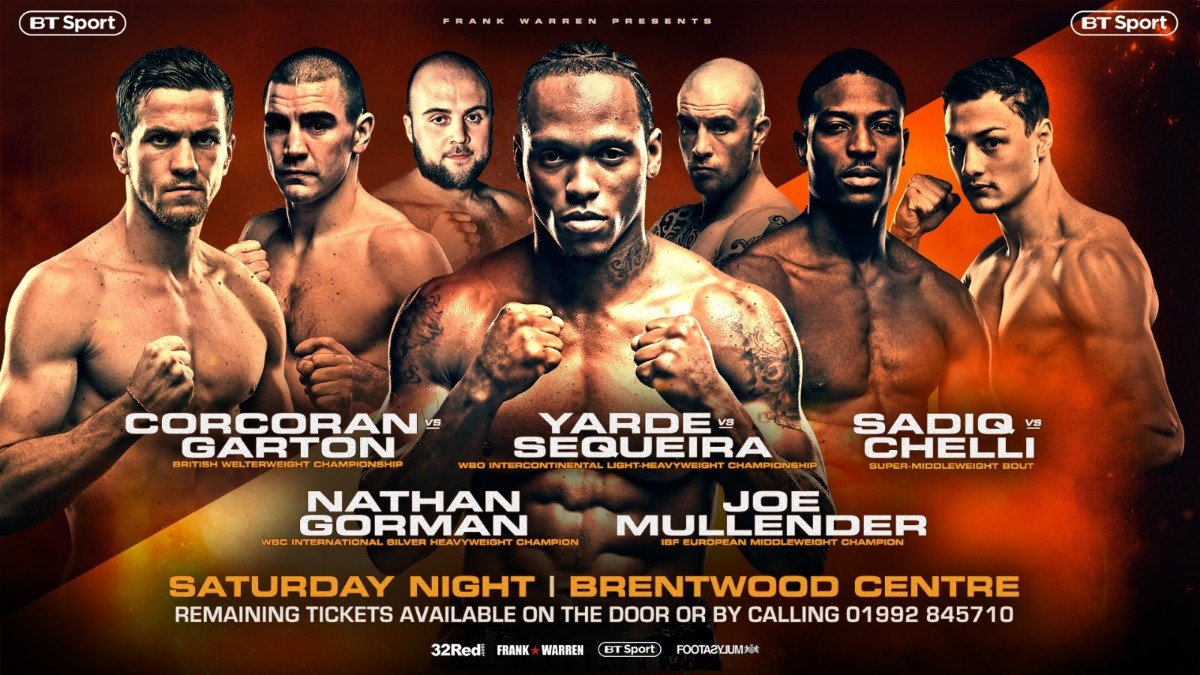 ANTHONY YARDE headlines the bill at the Brentwood Centre on Saturday when he defends his WBO Intercontinental Light-Heavyweight title against Argentina’s Walter Gabriel Sequeira.

Two of Britain’s top super-middleweight prospects Umar Sadiq and Zak Chelli meet over eight rounds. Chelli won a toss of the coin to be in the home corner.

Here are a selection of quotes from yesterday’s press conference.

“This is part of Anthony’s education moving forward. I am told by his management that Walter fancies the job.

Regarding Frank Buglioni, we offered over £100,000 and he did not want to know. This is about Anthony moving up the rankings.

Johnny Garton and Gary Corcoran are two tremendous competitors and it will be something special. What you see is what you get and it will be a good fight.

Zak and Umar is a pick ‘em and both called for it. Whoever wins will go on quickly and it will not be the end for the loser.

The job Ricky Hatton has done is amazing.

If he keeps moving forward, we will see some fight between him and Daniel Dubois next year.

I could fight for a world title and win it, but it is about getting to that stage and staying there. I had 12 amateur fights and just 16 professional fights so I am inexperienced.

I want ten years in boxing and I have been professional for three years, so with seven years left there is no rush.

My talent has to be improved in all areas. Boxing is not a sport where you can be at a low level at all.

I’m confident and when you have power like me, it relaxes your nerves.

People complain about my opponents, but Walter is ranked above every other British rival apart from Callum Johnson.

The Joshua Buatsi fight can build. If he is as confident as I am, it is a big event down the line.

Anthony is a very good boxer, but I am well prepared and cancelled a fight in September to take this.

Anthony has few weaknesses, but I have got a surprise in store on Saturday.

I always face bigger men and this will not be a problem. I have experienced this.

I have boxed at a way higher level and I am confident of winning. I have better experience and beaten better boys, but I have to show it on the night.

I can either outbox him or have a fight. It is up to me what happens on the night. Either way I beat him.

It has been a long road to become mandatory and earn my shot. I have been on small halls fighting 50-50 fights and when I have had to step up, I have won.

I didn’t think I’d make it as a pro and thought I might get to Southern Area level.

Gary is a great fighter. He is very tough and I like him, but that goes out of the window.

We are going to meet head on. To win the British title it would mean the world to me.

“Umar is basic and simple and like an amateur. His prime was 26 and he is now 30. He just acts like a kid.

I respect every man who will get in the ring. I see videos of him knocking grown men over, but I fail to see what he can do to me.

I am going to outbox him – simple as that.

Each round I keep on learning, but winning is the main thing.

I have been sparring Hughie Fury and that is the next best thing to fighting.

Daniel Dubois did what he had to do against Kevin Johnson and got the ten rounds, but there was no offence from Johnson.

Daniel is good at the basics. I am good at the opposite and I am wrong for him. I beat him easily.

Anthony Yarde will be headlining the Brentwood Centre on October 20th when he faces Argentinian Walter Gabriel Sequeira. World title challenger Gary Corcoran and Johnny Garton will contest the vacant British welterweight title. Zak Chelli and Umar Sadiq will both be putting their young, undefeated records on the line in a super-middleweight contest. Heavyweight Nathan Gorman will also feature along with IBF European Middleweight Champion Joe Mullender on the show televised live on BT Sport.

Remaining tickets are available at the Brentwood Centre box office or via calling the Queensberry Promotions Box Office on 01992845710.