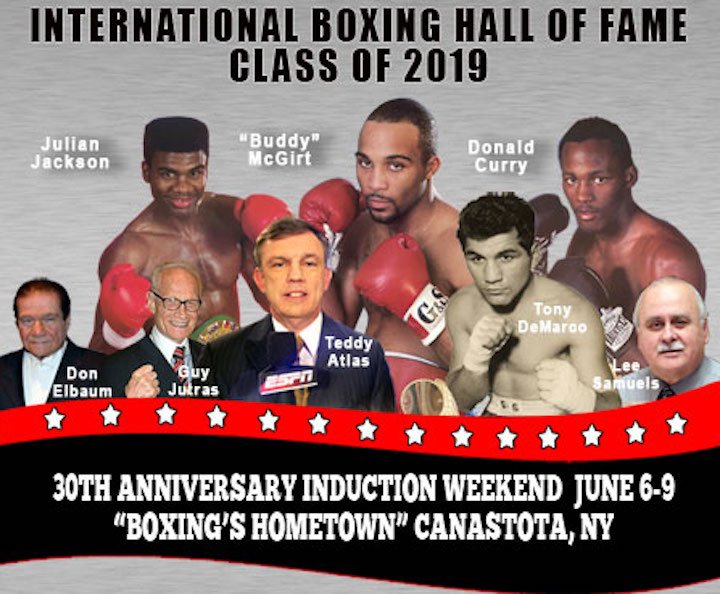 “We’re extremely excited about the Class of 2019 and are very much looking forward to honoring the newest class of inductees,” said Executive Director Edward Brophy.

The 2019 Hall of Fame Induction Weekend will be held June 6-9th in Canastota, NY. Many events in “Boxing’s Hometown” of Canastota throughout the four-day celebration, including a 5K Race / Fun Run, golf tournament, boxing autograph card show, VIP Cocktail Reception, Parade of Champions and the Official Induction Ceremony on the Hall of Fame Museum Grounds, are scheduled. The Hall of Fame Weekend evening events include Friday night’s Fight Night at Turning Stone and Saturday’s Banquet of Champions. Both events will take place at Turning Stone Resort Casino in nearby Verona, NY.

The Hall of Fame also released the name of one posthumous honoree: journalist Mario Rivera Martino in the Observer Category. Inductees were voted in by members of the Boxing Writers Association and a panel of international boxing historians. Biographies on the Class of 2019 can be found on www.ibhof.com

For more information on events planned for the Hall of Fame’s 30th Annual Induction Weekend please call (315) 697-7095, visit online at www.ibhof.com, on Facebook Twitter and Instagram.

“Alright! Now we’re talking. It’s an honor. This is the greatest day of my life. I’m overwhelmed to get this call from the Hall of Fame. It’s a dream come true.”
– Donald Curry

“I tell you what, I’m speechless. This is a tremendous honor. Thank God for his grace and mercy. Wow! It’s amazing! I really don’t have words for this but eventually they will come.”
– Julian Jackson

“To be honest, I can’t even talk right now. This shows you’re appreciated by the boxing world and that all the hard work and dedication pays off.”
– James “Buddy” McGirt

“I am honored to be inducted into the International Boxing Hall of Fame Class of 2019. I am grateful to the international sportswriters and to the boxing community.”
– Tony DeMarco

“You don’t know how much this means to me. This is unbelievable. Fantastic. My whole life has been dedicated and attached to the sport of boxing and this is the greatest news I could ever get. Being recognized by the International Boxing Hall of Fame is the greatest reward that anybody can ever get.”
– Guy Jutras

“The biggest honor in the sport of boxing is induction into the International Boxing Hall of Fame and the greatest honor any publicist can hope to get. This is a tremendous honor. I now will be in the Hall of Fame with my former boss, the best publicist in the sport of boxing, Irving Rudd. And I wouldn’t be where I am without Bob Arum.”
– Lee Samuels

“The sport of boxing has given me direction and a clarity for the difference between work and passion and a job and a purpose. It has also given me opportunities to share special moments with my family, as it has now with the news that I have been elected into the International Boxing Hall of Fame.”
– Teddy Atlas