Promoter Bob Arum is irate about the Florida Commission giving 58-year-old Evander Holyfield permission to fight this Saturday night in an eight round fight against Vitor Belfort in a boxing match on Triller PPV.

Arum thinks it’s a terrible idea for a fighter Holyfield’s age to be given clearance to fight by the Florida Commission without first having his brain checked out by the Cleveland Clinic or the Mayo Clinic for them to determine if he’s fit to return to the ring.

Boxing fans were alarmed this week when they saw how badly deteriorated Holyfield looked in his media workout on Wednesday. Although Holyfield’s physique was that of a relatively young person, his hand speed showed his age loud and clear.

Holyfield hasn’t fought in 10 years since 2011, and he’d arguably been a shot fighter since his first fight with Lennix Lewis in March 1999.

Surprisingly, Holyfield was picked out as the replacement for Oscar De La Hoya after he backed out of his fight with former UFC champion Belfort last week after reportedly testing positive for COVID-19.

Holyfield had been trying to get a fight with 55-year-old Mike Tyson, which would have made more sense for him than taking on the still relatively young 44-year-old Belfort. 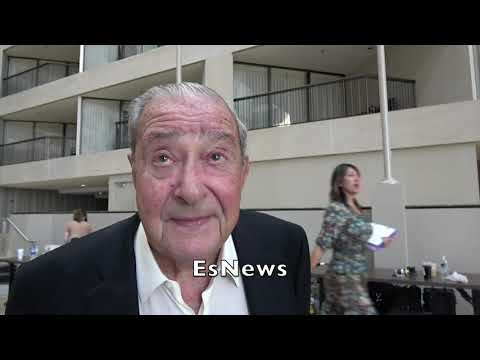 “What I’m really stressed out about is the Florida Commission approving this fight with Evander Holyfield, who is nearly 60 years of age.

It’s still a boxing match, and they’re going to throw punches at his head,” said Bob Arum to ESNEWS on Evander being allowed to fight Vitor Belfort this Saturday night despite being 58.

“Don’t you owe Evander the caution of having him examined by the Cleveland Clinic or the Mayo Clinic before you allow a nearly 60-year-old man in the ring.

“If it’s a Jake Paul fighting some guy, who cares? He’s a young guy, and you test him like you would any fighter. But a guy that is close to 60 is not just anybody.

“He’s got to be really tested to see if he can take the trauma to the head, which he may face. People say, ‘Well, the guy he’s fighting can’t punch the way Evander’s opponents punched.’

“Again, that was when Evander was a young man and not close to 60. I say what the Florida Commission is doing now is totally irresponsible,” said Arum.

There’s nothing anyone can do about it, as Evander wants to fight Belfort, and presumably, he’ll be well paid for it. All we can hope for is Holyfield doesn’t get hurt during the fight.

With Holyfield’s chin, he might be able to handle the shots from Belfort and maybe even win if the Brazilian fighter gasses out. Belfort is carrying a lot of muscle, and it could be hard for him to fight hard for a full eight rounds without fading.

It’s unclear if VADA will be testing the fighters after the fight. That would be a good idea, given the recent news of Oscar Valdez testing positive for a banned substance.