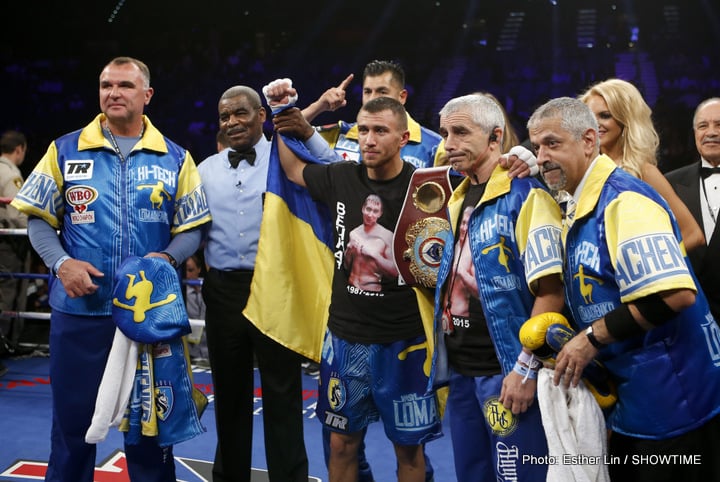 Speaking with Gareth A Davies of The Telegraph, Arum said he and British promoter Frank Warren have been talking about Lomachenko coming to the UK some time next year to challenge reigning WBO lightweight champion Terry Flanagan. Lomachenko would be making another move up in weight and it would be a massive fight for Flanagan.

“We signed four Olympians after the Olympics in England. One of them was Lomachenko, who I think is the best fighter in the world,” Arum told Davies. “I’ve never seen a guy as good as him. I talked to Frank (Warren, Flanagan’s promoter) and we’re discussing early next year in Lomachenko’s ninth or tenth fight, sending him over to England to fight Terry Flanagan for the WBO lightweight title. That will be interesting. Frank is excited about that.”

Flanagan, 30-0(12) makes the third defence of his title tonight, against South African veteran and former IBF 130-pound champ Mzonke Fana. Flanagan now has the added incentive of this possible mega-match with fellow lefty Lomachenko to inspire him to victory. It seems British fighters are going in with the absolute best of the best just lately; what with Amir Khan and Liam Smith facing Mexican superstar Canelo Alvarez, Kell Brook facing the feared Gennady Golovkin, Jazza Dickens going in with the avoided Guillermo Rigondeaux (also on tonight’s show in Wales) and now this possible match-up.

27-year-old Flanagan wants the big fights and if he landed one with Lomachenko, he would have arguably the toughest assignment of any of the aforementioned British talent. Now, Flanagan has to get the job done in style tonight and suffer no upset at the hands of 42-year-old Fana, 38-9(16).