Top Rank promoter Bob Arum is calling IBF/WBC light heavyweight champion Artur Beterbiev “the hardest puncher in boxing” as he returns to the ring this Saturday night on December 17th to defend his belts against WBC mandatory Marcus Browne. The fight will be shown LIVE on the ESPN+ app.

In a bad sign, the 36-year-old Beterbiev came in overweight at 175.2 lbs for his first weigh-in attempt on Thursday at the weigh-in for Friday’s fight.

If Beterbiev is weight drained from his efforts to lose weight, he could lose to the highly technical Browne because this isn’t the type of opponent that the Russian fighter can afford to be weakened.

Although the two-time Russian Olympian Beterbiev made weight at 175 lbs after being given two hours to take the weight off, you have to wonder whether he’ll be at full 100% capacity for his fight with Browne on Friday.

For his part, the 31-year-old Browne weighed in without any issues, coming in at 174.6 lbs. Browne looked impressive in his last fight in beating Denis Grachev earlier this year in April by a 10 round unanimous decision.

Friday night in Montreal, the hardest puncher in boxing, light heavyweight champion Artur Beterbiev, goes for his 17th straight KO against the formidable Marcus Browne in what should be a scintillating bout. Watch it on ESPN+.

Arum’s glowing words won’t mean anything if Beterbiev fails to get the win on Friday night against the 2012 U.S Olympian Browne.

It’s critical that Beterbiev wins this fight because he’s going to need to stay champion as long as possible for him to get a chance to face Canelo Alvarez, who is interested in fighting for all the belts at 175.

It would appear that Canelo is going to save Beterbiev for long to age him a little more before he challenges him for his IBF & WBC 175-lb titles.

Canelo’s next fight will be against WBC cruiserweight champion Ilunga Makabu next May.

Assuming Canelo wins that fight, he’ll move down to 175 and likely challenge WBA light heavyweight champion Dmitry Bivol in the summer of 2022, and then wrap up the year with a fight against WBO belt-holder Joe Smith Jr. in September on the Mexican Independence Day holiday.

It’s entirely possible that Canelo will save Beterbiev for May 2023, as he’ll be 38-years-old by then, and will have aged enough for him to be picked off. Canelo is smart with the way he holds off on fighting aging guys until they’ve lost enough from their game before fighting them.

Unfortunately, Canelo can’t do that with David Benavidez, but he doesn’t need to worry about him right now because he’s effectively belt-less and unable to put pressure on him.

We’ll see if Canelo can wait long enough to beat Beterbiev or if this move will backfire on him with the Russian fighter aging better than him.

The way that Canelo has looked lately, his work rate has talent a massive hit with him throwing fewer punches and struggling against B-level opposition in Billy Joe Saunders and Caleb Plant. Those are fighters that Beterbiev would likely make easy work with if they were to come up to 175 to challenge him for his two titles.

Grab your popcorn and tune in on ESPN+ tomorrow. #BeterbievBrowne pic.twitter.com/0xZM5f9W0f 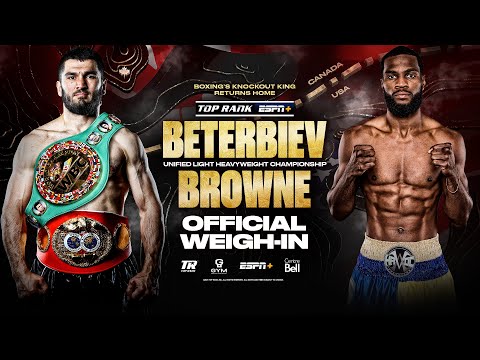