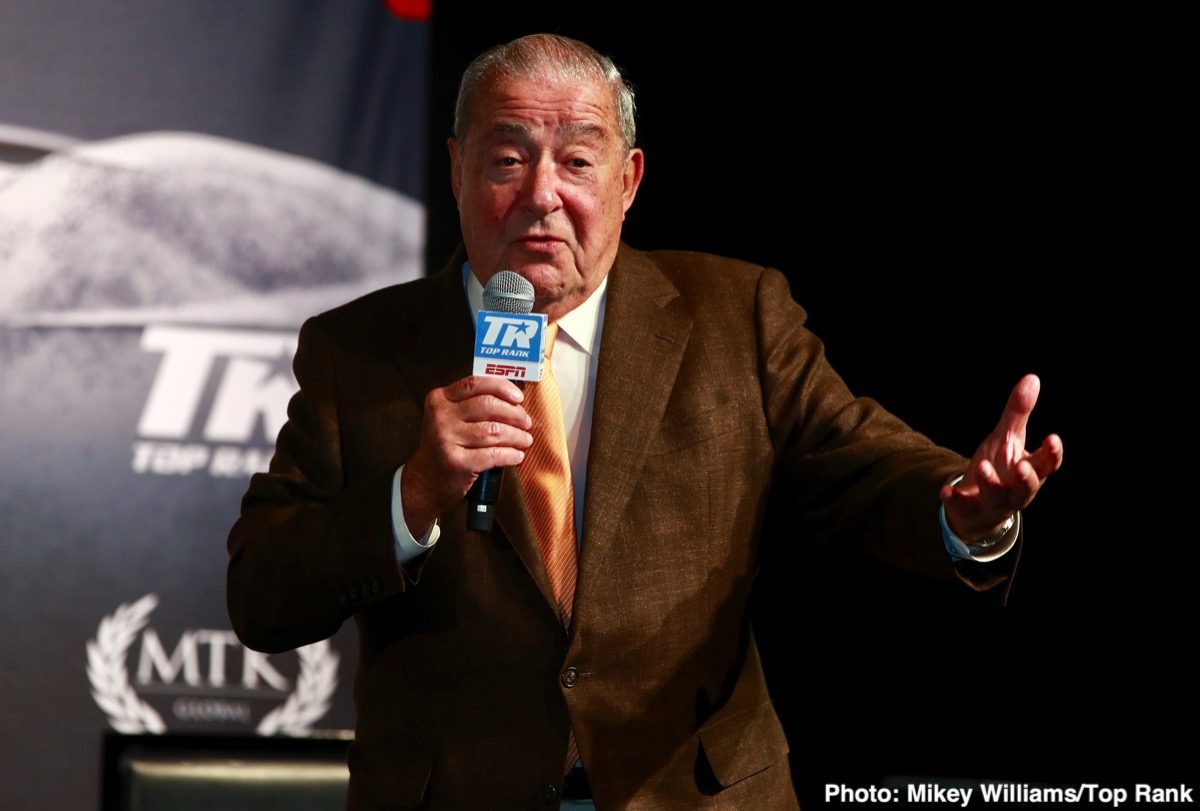 Hall of Fame promoter Bob Arum, who has been around the sport for six decades, has seen up close what can happen to a fighter – to any fighter – if he sticks around the game too long. Just recently, over the last six months or so, we have seen two very high-profile, top-class fighters who had turned the age of 40 suffer serious injury in fights: Adonis Stevenson back in December, and Zab Judah just last week. Both men wound up in hospital with a brain injury.

And Arum, in speaking with Fight Hub (as picked up by Bad Left Hook) spoke about his fears for ANY active fighter past the age of 40; Manny Pacquiao included. Arum said he would absolutely hate to see Pacquiao suffer the kind of injury that befell Judah and Stevenson.

“Zab Judah is a perfect example. Zab Judah, you know, he had bad habits but he was a terrific fighter. His fight with Mayweather was a really good fight, and Zab Judah is a perfect example of how dangerous it is for a guy to continue fighting into his 40s,” Arum said. “Go past Zab Judah and look at Adonis Stevenson – 42 years old, you know. He performed pretty well in the fight and in the last round took a beating from Gvodyk. He went through eleven-rounds, I think he was winning the fight or it was an even fight, and then Gvodyk got to him and knocked him out before the referee could stop the fight. And the poor guy has spent, what, six, seven months in the hospital and even though thank God he’s recovered a little bit, he’ll never be the same again.”

And Arum is worried Pacquiao, as great as he is, is running the risk of meeting a similar fate:

“I wish him the best and I hope he wins the fight but I am concerned, as I would be for any fighter, that when they get to a certain age they probably shouldn’t be fighting anymore,” Arum said of Pacquiao’s upcoming fight with Keith Thurman. “You know, the doctors will tell you that the cranium as you get older, thins out. When they get older the cranium is thinner, and when you get hit it affects…….that would be the worst thing in the world if Manny Pacquiao suffered brain damage at this point.”

As special as Manny clearly is and as effective as he has been, at age 40 and counting, of holding off the advances of Father Time, Pacquiao is as human as the next guy. Throughout boxing history we’ve seen too many fighters to list that carried on for too long and paid the price. It’s tough going out with a win, health intact, and here’s hoping Pacquiao can be one of the exceptions.