While Vlad Sirenko is not a fighter the casual boxing fan would recognize, he has a proven blueprint for elite heavyweight prospects: an impressive amateur record, success in top European championship competitions and a well-respected trainer—James Ali Bashir. Bashir is the former trainer of current heavyweight champion Oleksandr “The Cat” Usyk (20-0-0, 13 KOs), who recently defeated Anthony Joshua (24-3-0, 22 KOs) by split decision to gain the IBF/WBO/WBA/IBO Heavyweight belts. Bashir trained and assisted renowned trainer Emanuel Steward for 17 years at the Kronk Gym in Detroit, Michigan. Bashir’s list of top heavyweights is impressive: Usyk, Wladimir Klitschko, Lennox Lewis and others. Sirenko now lives in Los Angeles and gave his thoughts on the state of the division, his goals and future plans in an interview.

Q. Vlad, the relationship between boxer and trainer is critical to a boxer’s success. Tell me how training with James is going. Describe your relationship with Bashir and the progress you’ve made.

A. It is going very well. James is an old school type of trainer, he demands a lot from me. But I like it because he keeps me focused and has a lot of success as you know with training Usyk and other big fighters. We have a very good relationship and I listen to him very carefully because he knows what it takes to become champion.

Sirenko is a student of the sweet science and appreciates the legacy of the heavyweight division.

Q. What kind of trainer is Bashir to you? Do you understand what he’s teaching you and do you aspire to be in the same league as the greats of the past?

A. He is very smart and wants me to live a very dedicated lifestyle. Very businesslike. He makes sure I am living every day like a future champion, training hard, taking it seriously, putting in the hard work and no distractions. I definitely want to be a great heavyweight champion one day.

Q. Who are your favorite heavyweights of all time? Who do you admire, who do you wan to be compared to one day?

A. Well, Muhammad Ali of course is the best of all time. He was not just a great boxer. He was a great human being. What he did outside the ring was amazing with his political beliefs and he was such a powerful figure I really admire all that he did. His footwork was the best and he had such a good spirit, never gave up and that mentality is very important.

Vlad Sirenko has a lethal left hook, which has dropped many of his opponents. Not surprisingly, Sirenko is a big fan of heavyweights known for the left hook.

Q. What other heavyweights do you think are the best?

A. I think Joe Frazier was amazing, he had such a great left hook. His style was very aggressive, and he wore his opponents down with his style. I also like Tommy Morrison.

Q. Tommy Morrison? I wasn’t expecting that. But he was very strong. Legends like George Foreman and Lennox Lewis have said that Morrison hit as hard as anyone.

A. Yes, and he had a very good left hook. He was very skilled and it’s very sad that he did not dedicate himself better outside the ring. That is a problem with some fighters. They become rich and, I don’t know, I think maybe the money makes them sometimes not motivated to stay focused and be as good as their potential because they get distracted.

Q. What about Lennox Lewis? I have written before that I consider Lennox to be a top five heavyweight of all time. He only lost twice and avenged both defeats. He was mentally tough as well.

A. Of course, I agree. What I admire about Lennox Lewis is his mental strength, he never gave up and was very smart in the ring. I also like the way he carried himself. Very classy, not a trash talker, no troubles outside the ring. Which happens sometimes like with Mike Tyson. When I was young in Ukraine, we worshipped Mike Tyson. He was so exciting and so very talented, very good skills. But unfortunately, I think his problems outside of boxing made him not as good as he could have been.

Sirenko is not the type of boxer likely to succumb to the allure of riches and popularity that have cut short many a boxer’s career. Sirenko is very humble and serious and couches his answers very carefully. He is not your prototypical “trash talker” in or outside the ring. He has experienced turmoil arising out of the war between Russia and Ukraine that has hindered his return to the ring.

Q. Vlad, it’s been nearly a year since you fought last. Why the delay?

A. Many reasons. First, the war in Ukraine has been very difficult for me, very emotional for me. Many members of my family fled Ukraine to live in Holland and of course I remember growing up in Ukraine. It makes me very sad that my family and my country have to go through hell. I also have relatives in Russia, which makes it even more difficult because they do not have the freedom to speak out. So, I am being very patient because I want to make sure my head is clear when I return to the ring.

When asked about his potential return date and opponents, Sirenko was careful with his words. He is serious and guarded by nature.

Q. Do you have any future bouts scheduled? When do you plan to fight again, and who are you looking to fight?

A. I do not have any fights scheduled right now. James [Bashir] is not worried because he knows I need to be mentally as well as physically prepared the next time I fight because it has been a long time. But I want to fight definitely this year, and next year, I want to fight at least two or three times.

Q. Okay. Who are you looking to fight this year or next? Would it be one of the top heavyweight prospects out there, someone like Filip Hrgovic, Tony Yoka, Joe Joyce? When do you think you’ll be ready for a title fight?

Careful and guarded as usual, Sirenko declined to go into much detail despite prodding:

A. Well, all of those guys would be great. But I have to take it one step at a time. James Bashir knows that I need to be completely prepared for any fight and we will wait until the perfect opportunity comes and take advantage.

Q. Have you approached these guys’ camps or been approached? Can you tell me who you’ve been talking to, or who you think would be your next opponent?

A. (Laughs). I don’t like to talk too much unless I am sure about my next fight. I want to concentrate on training hard. Like James says, we need to be extremely prepared the next time I fight because I am rusty a little bit because of not fighting and the situation in Ukraine.

James Bashir, Vlad’s trainer, recently had this to say:

“Vlad’s record now is 19-0, 16 KOs. And he could go out against anyone in the heavyweight division right now. I wouldn’t avoid facing any of them, including Filip Hrgovic, Tony Yoka, Joe Joyce, Dillian Whyte. He sparred with former WBC titleholder Bermane Stiverne, Michael Hunter and Joyce. And we’ve been looking to get in with AJ, Wilder, Fury.”

While relatively unknown, Sirenko is a heavyweight that should be on everyone’s radar as a future heavyweight force to be reckoned with. Sirenko has the pedigree, the physical and mental tools, and the right trainer. Look for bright things in the future from this serious and thoughtful rising prospect. 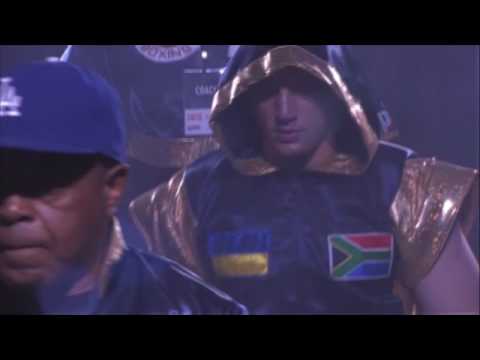