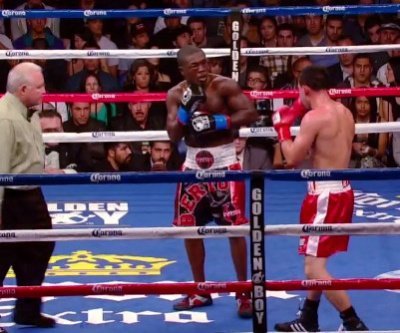 By Bill Phanco: If there’s one area in Andre Berto‘s game where you have to latch onto to assign blame for his 12 round unanimous decision loss to interim WBC welterweight champion Robert Guerrero last Saturday night it was with Berto’s experiment with the Mayweather style shoulder roll defense. Berto likely would have won the fight had he not wasted time using the shoulder roll defense, because it was one big fail for him.

Berto looked uncomfortable using the shoulder roll, and it didn’t work for him in this fight because Guerrero was able to sail his shots right over Berto’s left shoulder all night long. The purpose of the shoulder roll is to avoid getting hit, but it looked like Berto had no clue how to use it.

It was immediately clear in the opening round that Berto’s shoulder roll defense was a failure agaisnt Guerrero, because he was getting hit nearly at will. Berto should have abandoned the shoulder roll in the next round and gone back to his old defensive style. Berto has never been a good fighter defensively, but he’s never been as bad as he looked last Saturday when he trying to fight using the shoulder roll.

Learning how to use the shoulder roll takes time and a large degree of talent. Adrien Broner and Richard Abril both have perfected the use of it, but it takes a lot of time to get good with it. Berto needed more time to work on this before trying it out in a real fight because he didn’t know how to use it well enough to avoid getting hit. Guerrero was hitting Berto at will last Saturday, and I didn’t see many instances where Berto was blocking shots or able to get out of them.

Berto needs to either learn how to use the shoulder roll properly by maybe working out with Floyd Mayweather Sr. or abandon it and go with his old style of fighting.