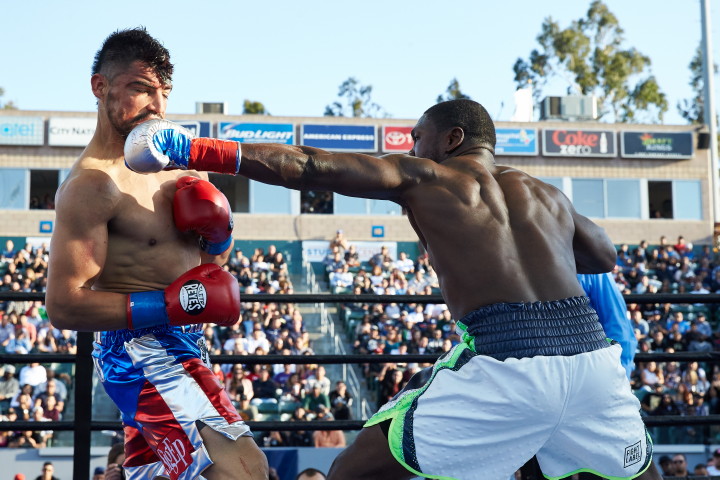 (Photo credit: Premier Boxing Champions) Andre Berto (31-4, 24 KOs) closed the door on his rivalry with Victor Ortiz (31-6-2, 24 KOs) in knocking him out in the 4th round tonight at the StubHub Center in Carson, California. Berto knocked Ortiz down twice in the 4th round. Ortiz made it back to his feet after the second knockdown, but after referee Jack Reiss asked the 29-year-old Ortiz if he wanted to continue, Ortiz froze and failed to respond to his question.

Reiss wasn’t going to wait around forever for Ortiz to answer in the affirmative, so he stopped the fight. Ortiz not only didn’t answer Reiss when he asked him if he wanted to continue fighting; he actually turned his head away as if he was quitting.

Earlier in the fight, Ortiz knocked Berto down with a nice left hand in the 2nd round. It wasn’t a huge punch. It was more like a pushing punch rather than a big shot.

Ortiz suffered a cut on his forehead from a head-butt in the 1st round. The cut bled in every round, but it wasn’t a factor in the fight.
In the 4th, Ortiz got careless and was knocked down by a right uppercut to the head. The punch seemed to knock the confidence out of Ortiz because he fell apart mentally after that and could do little to keep Berto off of him. Ortiz never even attempted to move or hold like normal fighters do when they’ve been badly hurt by a shot.