Promoter Bernard Hopkins says he wants Ryan Garcia to go after Gervonta ‘Tank’  Davis next if he successfully defeats Javier Fortuna in his “test” this Saturday night on DAZN at the Crypto Arena in Los Angeles.

There’s a lot of money to be made for Ryan against the popular Tank Davis, but it’s also a fight that he has every little chance of winning based on his resume and how he looked in his last two fights.

Ryan was supposed to fight the 33-year-old Fortuna (37-3-1, 26 KOs) last year in July, but pulled out of the contest due to mental health issues. Joseph ‘Jojo’ Diaz stepped in and beat Fortuna handily by a 12-round decision.

The loss for Fortuna has taken a lot of the shine out of Saturday’s fight because this is no longer a match that makes sense other than for record-padding purposes for Ryan.

“Do I love to knock people out? Yes, I do. So you have somebody that loves to do it.  But when I force it, it doesn’t happen. I’m just focusing on hitting him and keep hitting him.

“It’s more Ryan’s obligation to show that he’s ready for anyone, including Tank Davis,” said Benard Hopkins to Fighthype. “I think when you look at Ryan’s last fight, what has he learned and not learned from that fight to what’s going to happen Saturday.

“It’s still a question mark there, but on Saturday, I believe that it’s up to him and Ryan to say, ‘I’m going through this door, and this is who I want.’ Personally, I believe he’s going to do that.

“I think you and everyone else is going to be asking for the Tank Davis fight. I’d rather see him go right to the top. Tank right now is the division. I’ll say it again if you need me to repeat it. Why mess with the second or third best? Go right to the dance.

“If you really believe you’re that guy, then you have to be that guy, but not talk that guy. The process starts Saturday, and it leads to without having hopefully bigger & better things for Ryan Garcia.

“So, you can have all the belts, but that doesn’t mean they fit your pants,” said Hopkins when told that Devin Haney has all the belts at 135.

“Who’s more popular, Ryan or Haney? You mean to say that if Haney walks in the mall downtown LA. Take out LA, who is going to see who first? It ain’t about color, it ain’t about [height], and it ain’t about who looks better. It’s about the talent.

“I’m just telling you when Ryan makes that statement on Saturday, go right to the top [to fight Tank Davis]. Why mess around down there to prove it’s already proven.

“Listen, if you can’t prove it yourself that night. After Saturday, I think everything else is irrelevant. What are we talking about? He [Ryan Garcia] wants to go straight to the top.

“I admire that, especially when he has the momentum to go right to the top, and we proved that he’s ready. But we can’t prove he’s going to win or not until it happens.

“Right now, we got to get through that step [Fortuna] in the door right there. That door is important because even though we disagree to agree, he got through that door. Anyone else, it seems, would be non-productive.

“We were talking about the Ray Leonard, the 80 era. Man, come on. The early 90 era. Yes, the four kings. That’s what we’re looking at. The four kings of this era is shaping up and gaining some momentum. On Saturday night, it’ll be full-bloom.

“I never seen the man out of shape,” said Hopkin about Ryan. 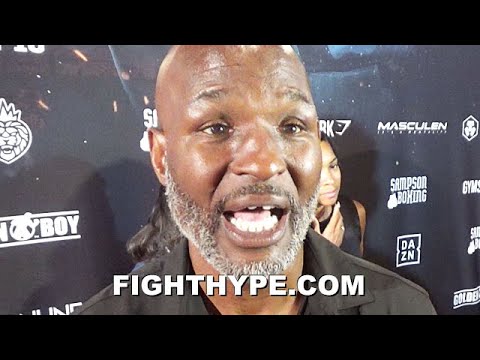