Tony sees Joshua’s weakness is his rare habit of getting overly emotional when facing pressure fighters that take the fight to him. In AJ’s past fights against Whyte, Andy Ruiz Jr [first fight], we saw that and briefly in his match against Wladimir Klitschko in 2017.

Joshua had problems in all three of those fights and was fortunate not to lose them all.

“I may think AJ beats Fury, but I think AJ has real problems vs. Whyte in a rematch because styles make fights,” said Bellew to Talksport. 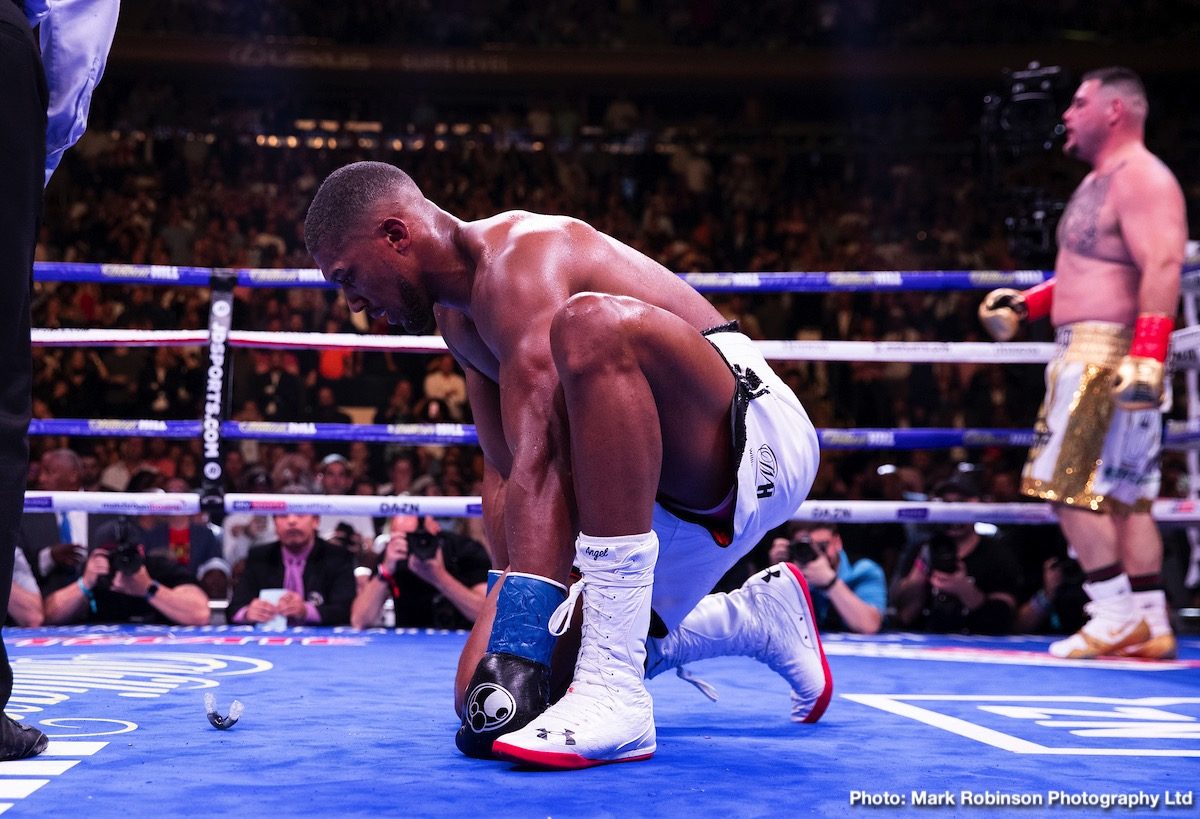 “It’s so fierce between them with rivalry; he’d probably get caught up in a war… I think vs. Fury, he doesn’t get involved with any of that,” said Bellew.

The way Joshua looked in his last two fights against Andy Ruiz, he’s going to have issues with Tyson Fury. But first, Joshua needs to defend against his IBF mandatory Kubrat Pulev on December 12th, and it’s not a given that he wins that fight.

Bellew didn’t discuss Joshua’s poor stamina and his over-muscled physique and weak chin. He can’t take a punch, and he runs out of gas quickly when he’s forced into a war during any given round.

What makes it worse is Joshua stays tired for two to three rounds after he gasses out. He doesn’t recover quickly, like most fighters. His cardiovascular is that of a short-burst powerlifter, and that’s why he is so slow in his recovery.

Interestingly, Bellew wouldn’t have noticed that. Is it because Bellew purposefully left that out is that he was previously promoted by the same Matchroom stable as Joshua, or is just not observant?

Whatever it is, Bellew completely overlooked how Joshua gasses and doesn’t recover quickly. It would have been nice for Bellew to state the obvious about Joshua and mention his poor punch resistance.

Fury’s rabbit punching will be a problem for Joshua

Joshua’s inability to take a hard shot without getting stunned may not be as much of an issue against Fury because he’s a weak puncher, but if he clubs AJ with one of those rabbit punches that he was continually braining Deontay Wilder with last February, he could take him out in the first three rounds.

If Fury can hit Joshua with punches to the back of his head with impunity, the fight won’t last long. Joshua can’t take those kinds of rabbit punches without getting stopped.

Whether Fury gets away with those illegal punches depends on the referee that works the fight. If it’s a referee that Fury from throwing those punches early, then Joshua has a better chance of surviving. Those shots are so damaging that it may only take a small handful from Fury before Joshua is done in for the night.

Read:  Foreman Vs. Tyson In The 1990s: Arum Says He Thinks “Big George” Would Have “Hit Down On Tyson And Knocked Him Out”

Even if Joshua and his trainer tip off the referee to police Fury’s habit of throwing rabbit shots, he’ll be slow in acting on those shots or inconsistent.

With rabbit punches, a referee has got to stop the fighter immediately from throwing them. Unfortunately, many referees don’t do that. While they police the low blows, which are far less damaging, they generally do very little when it comes to punches to the back of the head.

Bellew explains how to beat Fury

“I think AJ does beat Tyson Fury, but he’s got six rounds to do it. If it goes past six rounds, I don’t think he beats Tyson Fury,” said Bellew.

“To beat Tyson Fury, you’ve got to be willing to jump on him and not care what’s coming back. He just literally jumps on him and throws and lets the punches go,” Bellew said.

The obvious way to beat Fury is to take away his ability to punch to the back of the head. If he can’t land rabbit shots, he won’t have as good of a chance of beating Joshua. I don’t know why Bellew failed to mention that.

It’s unlikely Joshua will beat Fury on the night unless he catches him early and batters him until the fight is halted. Fury’s popularity could result in him getting more time to recover.

You can argue that Fury should have been knocked out in the 12th round in his first fight against Wilder in 2018. He looked so badly hurt after getting hit with a crushing right-left combination from Deontay. Normally, referees stop fights in that situation, but not this time.

If a referee is willing to give Fury extra time to recover while he’s unconscious, then maybe he can get back up, and someone spoil his way to a victory if he doesn’t knock Joshua out with rabbit shots.