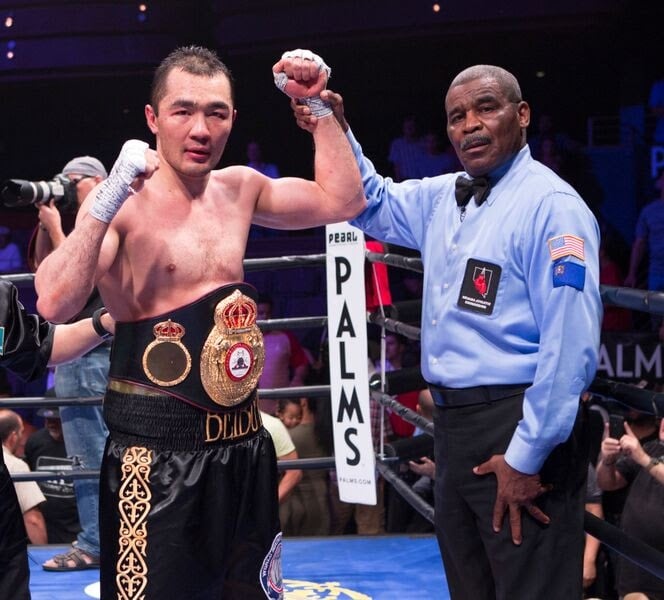 Two-division World Boxing Association (WBA) World Champion Beibut Shumenov has relinquished his WBA cruiserweight world title, due to his career-ending eye injury, and he has announced his retirement from the ring.

“I have regrettably relinquished my WBA cruiserweight title and retired from boxing because of a traumatic eye injury suffered the week before my last scheduled fight,” Shumenov said from his Las Vegas home. “I’m extremely disappointed my boxing career has ended like this but, unfortunately, injuries are part of this sport and there’s nothing I can do about it. I still have blurred vision and I need to have an additional surgery next month to try to further repair so I don’t risk blindness in my (right) eye.

“I’d like to thank my family, my team throughout the years, friends and fans for their continued support all these years. I was proud to wear the WBA championship belt for many years as a two-division champion. I’m grateful to WBA President Gilberto Jesus Mendoza, his father, and all those in my WBA family. It was quite a ride and I look forward with great anticipation to the next chapter of my life with my son and future endeavors.”

During his last slated sparring sessions, Shumenov suffered an eye injury that required immediate surgery, forcing him to withdraw from his April 29 fight against Dorticos.

Earlier this month, the WBA received a letter from Shumenov’s eye surgeon, Dr. Kent L. Wellish, who wrote the following: “Mr. Beibut Shumenov has a serious ocular issue, a recurrent corneal erosion of his right eye, that with continued fighting, puts him at risk for permanently losing his eyesight.

“It is my medical opinion that he should permanently refrain from sparring, training and boxing due to the severity of damage to his eye and the high risk of further damage of vision impairment, including the possibility of permanent vision loss.”
The WBA accepted Shumenov’s relinquishment of his championship, noting that it expressed its gratitude and pride for his professional career with the WBA.

The last three years of Shumenov’s career was marred by inactivity, in which he fought only three times due to lack of managerial support, despite him training daily, in top shape and always being ready to fight. In fact, he sparred almost 400 rounds since his last fight (May 21, 2016) in anticipation of, first, a unification fight with Denis Lebedev and then for his fight versus Dorticos. Neither happened, however, as boxing politics enabled Lebedev to avoid fighting Shumenov, who defeated BJ Flores and then Junior Anthony Wright in back-to-back WBA elimination fights to be Lebedev’s mandatory challenger.

Even Shumenov’s mandatory fight against Dorticos was unnecessarily delayed because Dorticos’ promoter, Caribe Promotions, defaulted its right to promote the fight it had won by purse bid, followed by continuous and numerous date changes from February to March until finally landing on April 29.

The 33-year-old Shumenov retires as the first and only two-division world champion to date from Kazakhstan, as well as the record-holder for fewest fights needed to win the world light heavyweight championship, 10.