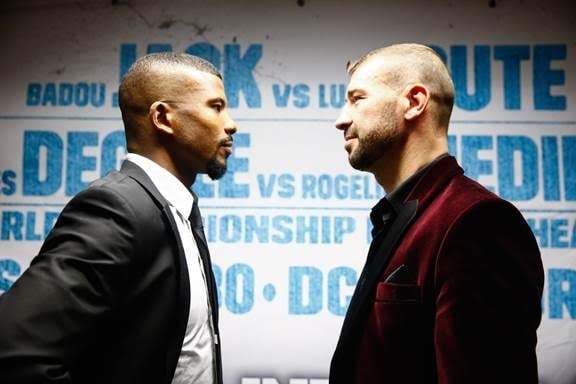 Tickets for the live event, which is promoted by Mayweather Promotions and Interbox in association with Matchroom Boxing, are priced at $200, $100, $50 and $25, and are on sale now. To purchase tickets visit www.ticketmaster.com, Ticketmaster locations, or call (800) 745-3000.

The fighters were joined by Mayweather Promotions’ Floyd Mayweather and Leonard Ellerbe, Interbox’s Pierre Duc and SHOWTIME’s Stephen Espinoza as they spoke to the media about the exciting doubleheader taking place in the nation’s capital.

Here is what the participants had to say Friday:

“I’ll be ready for this fight. Bute is a very tough opponent. I have to bring my ‘A’ game to win. Much respect to him, but he’s not leaving with my belt. Absolutely not. You can expect a very tough fight.

“Bute is a much, much tougher opponent that Julio Cesar Chavez Jr., but I’m ready for him.

“Bute’s fight against DeGale was one of the best fights last year. That’s the only reason he got this shot. He lost, but he looked good. It was a great fight. April 30 will be another great fight. And another loss for Bute.”

“This is a great opportunity for me to fight again for a title. I feel good, I started camp six weeks ago. Most importantly, I’m very healthy. Psychologically, I’m looking forward to becoming a world champion on April 30.

“I respect Badou Jack. He is a great champion, a great fighter, but on April 30, I will become a world champion again. I’m looking forward to it.

“I will be the new champion. I am very confident. I expect it to be a very tough fight, but I am coming here to win.

“I have a new team. They are changing some things in my work. My confidence is 100 percent. I’m working every day very tough and I am confident that everything will be great for April 30.”

“This fight is about the best facing the best. I’ve seen Bute fight numerous times and he’s a very exciting and explosive fighter. Every time he goes out there and performs he gives 100 percent.

“Mayweather Promotions is about giving people the best and most exciting fights.

“I commend Badou Jack for the way that he carries himself. He is a true gentlemen and that is what this sport is all about. He’s going to continue to make a name for himself in this sport.”

“We’re very thrilled about this fight. For those of you who have not been exposed to Lucian Bute before, he’s a great fighter. He’s been working extremely hard over the course of the last 6-12 months getting ready for a moment like this.

“Bute has a very long history of fighting great fights and championship wars. Lucian will be ready for this.

“Training camp is going astonishingly well. Lucian is usually more of a gentleman, so he will say he wants to do the best that he can, but I’m telling you that Lucian is going to be walking away with this belt. It’s going to be a fantastic and very exciting evening. Lucian will pull the upset on April 30.”

“The one comment I will make about this event, other than to point out it features four of the best fighters in the division, is that it was quite possibly the easiest event to make out of all the events we made this spring and summer. That’s a credit to the promoters and especially a credit to all four fighters.

“These are four real fighters here and they were not afraid of a challenge, they didn’t hesitate at all. This is what the sport of boxing is all about. I personally can’t wait for April 30th and for a unification later in the year.”