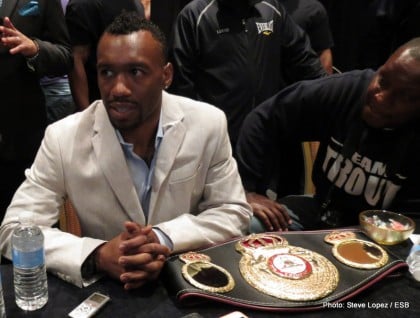 After the final press conference concluded, Saul Alvarez and Austin Trout took the time to address members of the media for one-on-one and roundtable interviews. I, along with other media correspondents, took the exclusive opportunity to sit down with the WBA champion.

Here’s a transcript of the questions and answers that were discussed with Austin Trout.

Question: “Are you worried much about the judging for the fight?”

Austin Trout: “It’s something I can’t focus much on or worry about because, at the end of the day, I have to focus on what I have to do in the ring. If it goes to the judges, it’s in God’s hands. If they want to jerk me, then it’s between them.”

Question: “How are you able to go through all these lion’s dens? Kind of a ‘no fear’ attitude? What is it?”

Austin Trout: “You can’t have any fear in this sport. I think there’s been a lot of fighters, say their Mexican, aren’t worried about anything. But in my opinion, it’s because they’ve been spoiled. We’ve gone to hell and back to get to where we are. I’m not going to let a variation of judges stop me from fighting.”

Question: “You’ve fought in Mexico, you’ve won in Mexico. How do you take that and apply it to this fight? Since it’s the United States, but it’s kind of like you’re fighting over there.”

Austin Trout: “The crowd can’t affect what happens in the ring. Once we’re in the ring, it’s just me and him. That’s all that I can focus on: what I’m going to do and reacting to what he’s going to do.”

Question: “Some people kind of thrive off that. They enjoy having that kind of energy against them and it helps them fight harder. Are you one of those types of fighters?”

Austin Trout: “I use all types of motivation, whether it’s positive or negative. If they’re booing me, my main goal is to shut them up not giving them anything to cheer for. If they’re going for me, my motivation is to give them something to cheer about.”

Question: “Talk about your style. People that aren’t familiar with you, how are they going to see you Saturday night?”

Austin Trout: “They’re going to see a boxing clinic in my opinion. But at the very same time, I have a very good adaptable mind. If I see things aren’t going well for me, I’ll change it up. Basically, I would do whatever it takes to win, what’s in the legal limits of the ring.”

Question: “Do you see the fight going the distance?”

Austin Trout: “You know, to be honest, I don’t think so. They say he’s the stronger guy. But in my opinion, he’s not. He hasn’t fought anyone my size and I’ve fought people bigger than his size.”

Question: “I was going to ask you about that. Do you feel you’re the bigger, stronger guy? You look like it when you guys stand.”

Austin Trout: “I feel I’m the bigger, stronger guy. I’m going to prove that Saturday. If it goes the distance, it’s going to be a decisive win.”

Question: “He’s not going to be the bully this time.”

Question: “You concerned about his power?”

Austin Trout: “Of course, of course. He is strong. I’m not saying he’s not strong or explosive. But, I feel I’ll be able to take whatever he gives.”

Question: “Do you relish fighting in front of that many people? Everybody gets nerves, but is that going to be intimidating?”

Question: “Beating Miguel Cotto and then if you beat Alvarez, where do you go from that? The only one bigger is Mayweather?”

Austin Trout: “Then we’ll go for that after this. But, first things first. We have this little beast called Canelo right in front of us and we have to get through him first.”

Question: “People say he’s the puncher, you’re the boxer. Is that an oversimplification, you think?”

Austin Trout: “No, because I can punch, too. Everybody that I’ve fought has been reluctant to walk in. It’s not the one-punch KO, but it is something to keep them off. So, I will be the boxer because that’s what I feel is going to make an easy fight for me. But I’m not just going to coast on it. I’m going to step on the gas when we need to. We’re going to win decisively.”

Question: “He’s been hurt before by smaller guys before. We saw Miguel Cotto’s little brother, who fought at Lightweight a lot of the time, hurt him before. You look at a film like that and is that what makes you confident you will get a knockout, too?”

Question: “Remember Chavez-Whitaker from the past. A similar fight to yours in some ways. Did you look at that fight to get a different result?”

Austin Trout: “We actually saw the Whitaker-Chavez fight to see what he did. The best way to never be history is to know your history. Pernell, in my opinion, could’ve let go of that left hand a little more. What we’re going to do is, again, step on the gas. I feel what I have to do to win is take him to those deep waters and drown him, so to speak. I’m a Trout! I can definitely swim.”

Question: “You have many more fights left in your career. You’re still a young guy. How would you like to be remembered? What type of legacy do you want to leave?”

Question: “Last words for the fans.”

Austin Trout: “I’m undefeated. I’m not losing my belt and I’m not leaving without his belt. I’m sure he’s got the same attitude…and if he doesn’t, might as well give me the belt.”