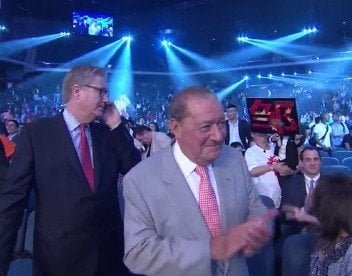 Top Rank boss Bob Arum is set to fly out to Manila on August 9, to meet up with the soon to return to the ring Manny Pacquiao and discuss his planned November 5 return to action. According to The Manila Times, Arum says Pac-Man’s opponent will likely be either unbeaten, recently unified WBO/WBC 140-pound champion Terence Crawford or once-beaten reigning WBO welterweight ruler Jessie Vargas.

“I have already booked my flight to Manila, I’m looking forward to that meeting” Arum said. “So far, they [Crawford and Vargas] are the candidates. It’s going to be an absolute blockbuster of a fight, either of the two. Everybody is excited to see Manny return. His last fight against Timothy Bradley was great.”

Is everyone excited to see Pac-Man return? If he came back to fight Crawford, a superb talent who many good judges feel could be the next pound-for-pound superstar of the sport, then yes, that would be a blockbuster. Pacquiao against Vargas though, despite being a solid fight, is no potential blockbuster. But making 140 and taking a risky fight with Crawford might not be all that appealing to 37-year-old Pacquiao – if he lost, where would he go then but back into retirement. Pacquiao might like the idea of a fight at 147-pounds and he might look at Vargas as a beatable foe who holds a major belt.

It’s unclear if Pacquiao’s return will be a one-fight deal or the first of a couple or three further big fights (Arum Tweeted on Sunday how he had a meeting set up with “people anxious to put on a Manny Pacquiao TR fight in the Middle East”) but Manny’s trainer has made it clear both he and Pacquiao very much want that big rematch with Floyd Mayweather Junior. Roach is convinced a fully fit (no shoulder injury) Pac-Man has the beating of “Money.”

If Pacquiao does find the urge to box on more than once, there are of course plenty of potentially great fights out there for him – how about, for example, another fight with his arch rival Juan Manuel Marquez. If Pacquiao has revenge over Floyd on his mind, why wouldn’t he want to try and avenge that shock KO loss he suffered at the hands of “Dinamita?” And besides, the previous four battles with the great Mexican warrior were just that, great. Who wouldn’t want to see a fifth installment of this thrilling rivalry?

If Pacquiao came back for the type of fight or fights the fans could get excited about – against Marquez and Mayweather (the first fight was dull, but if a return was set, who would really, honestly be able to say they have no interest in it?) – then maybe Arum would have the blockbuster he has spoken of. Who would you prefer to see Pac-Man face in his return: Crawford? Marquez? Mayweather? Vargas? Or someone else?