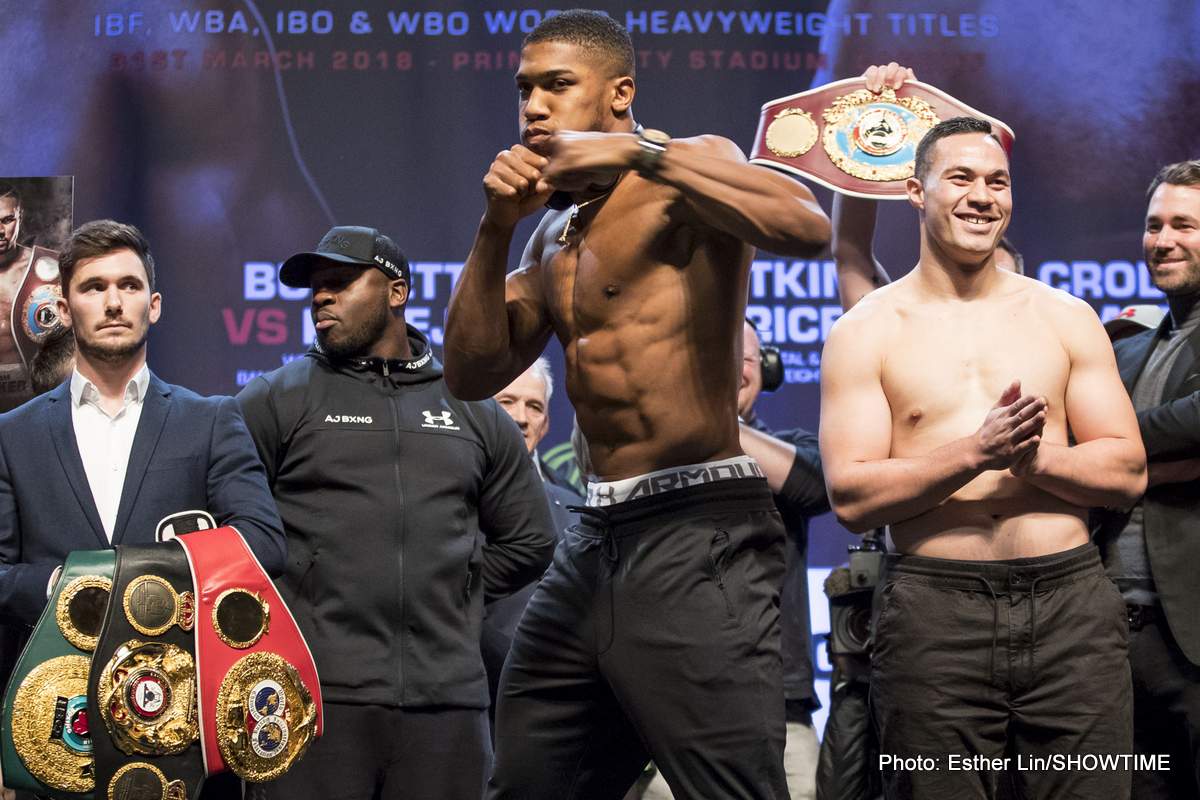 The current heavyweight Top-Three, (in no particular order) Deontay Wilder, Tyson Fury, Anthony Joshua – sure offer some mouth-watering possibilities as far as match-ups go. We could see a return of the quite fantastic Wilder-Fury battle next, or we could see Wilder get it on in a massive unification with Joshua, or we could even see Joshua fight countryman Fury in a fight that Eddie Hearn says would be “the biggest fight ever in the UK.”

But what does WBA/IBF/WBO champ Joshua want next?

Speaking as a guest on First Take (AJ is in the US, set to attend the Canelo-Rocky Fielding fight on Saturday night), Joshua stated, with no words minced, how he wants Wilder next, on April 13th at Wembley.

“Let me say this, I can’t control what Deontay Wilder, I can’t control what Tyson Fury does — or even as far as what they say. But what I can control is what I say and what I’m doing,” Joshua said. “I made sure, with the negotiations, I’ve booked the date in advance, set the venue in advance, and I’m making my point clear in front of everyone watching: I’m willing to fight any one of these guys, especially the champion Deontay Wilder, April 13th at Wembley. What more can I say? I’m not interested in Tyson Fury, though, ‘cos he’s not the champion. That’s where I’m coming from. But that ‘lineal’ status, when I was joining the heavyweight ranks no one told me about lineal champion. I knew about WBC, IBO, IBF, WBA, and WBO, and I’ve got my hands on four of them. So I don’t know where this lineal just popped out of the woodworks from. But if I’ve got to get my hands on that too, and that’s a belt that the world’s interested in, then Fury can step in if he’s serious. That’s where I’m coming from, I wanna fight the champions. I’m the one leading the pack, I’ve been doing that since I made my debut. Five years in, seven world title defences, and I’m running the game. I mean business. And I don’t know what more I got to do to get that message across to the world.”

Pretty firm words from AJ, right? But can it really be that simple? With all both sides have been though – Team-Wilder and Team-Joshua – it seems yet more negotiations would have to be gotten through before we actually got a Joshua-Wilder showdown. And with just four months to go until that April 13 date, we fans know better than to get over excited. Wilder may indeed go for that big rematch with Fury, and if he does, where does that leave Joshua for the time being?

Waiting for the winner in an ideal world. Joshua did come across on First Take as though he is a man running out of patience, that he wants that Wilder fight as much as we fans want it. But who is really the heavyweight in the driving seat right now? Is it AJ, as he says? Or is it Wilder, or Fury?