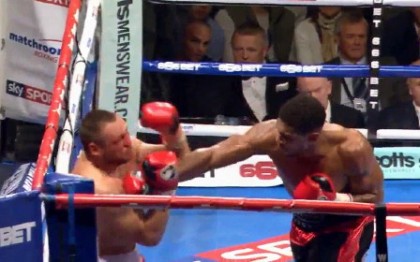 Anthony Joshua has had a fast paced career so far in the pro ranks. Ten fights in his first year as a pro, all wins by knockout. The level of competition has been on a steep rise also, rising from unknown fighters to serious journeymen type opponents in the very first year. It is likely that he will be fighting Kevin Johnson in his next two fights and this is the kind of guy who Dereck Chisora, Manuel Charr, Tyson Fury and Alex Leapai are fighting well into the prime of their careers. Joshua is expected to become the first man to stop Johnson in that fight.

Generally, what I am saying is he has been moving through the ranks at a very impressive pace and is already mixing it up with some decent names in the division. Most people would rate Joshua as a top twenty talent already. What we have to see now is a continuation of this process. Joshua has been managed perfectly so far but he cannot become complacent as the level of opposition is going to become a lot tougher for him from here on out.

Some life has been breathed into the heavyweight division with a current crop of around 10-15 very good heavyweights active at the moment.
Joshuas team now has to start targeting the better and bigger names in the division and move from the Sprott and Skelton type opponents to guys like Manuel Charr and Malik Scott. I would say it was a little early for someone like a Bermane Stiverne or a Chris Arreola, but those would be good matchups in the future, possibly this time next year should Joshua be able to keep advancing at the rate he has so far.

The most important thing is to keep active. The rate at which excitement has built around Joshua is down to his fans being able to see him every few months and they should keep him fighting multiple times like this to maintain that momentum. He has all the physical tools to be a success and make it to a world title fight but what he needs is experience and rounds. That is why Johnson is a good fight for him. He also has a date scheduled for April 4th according to Eddie Hearn so we should see a decent scrap their also, should a half good name be found.