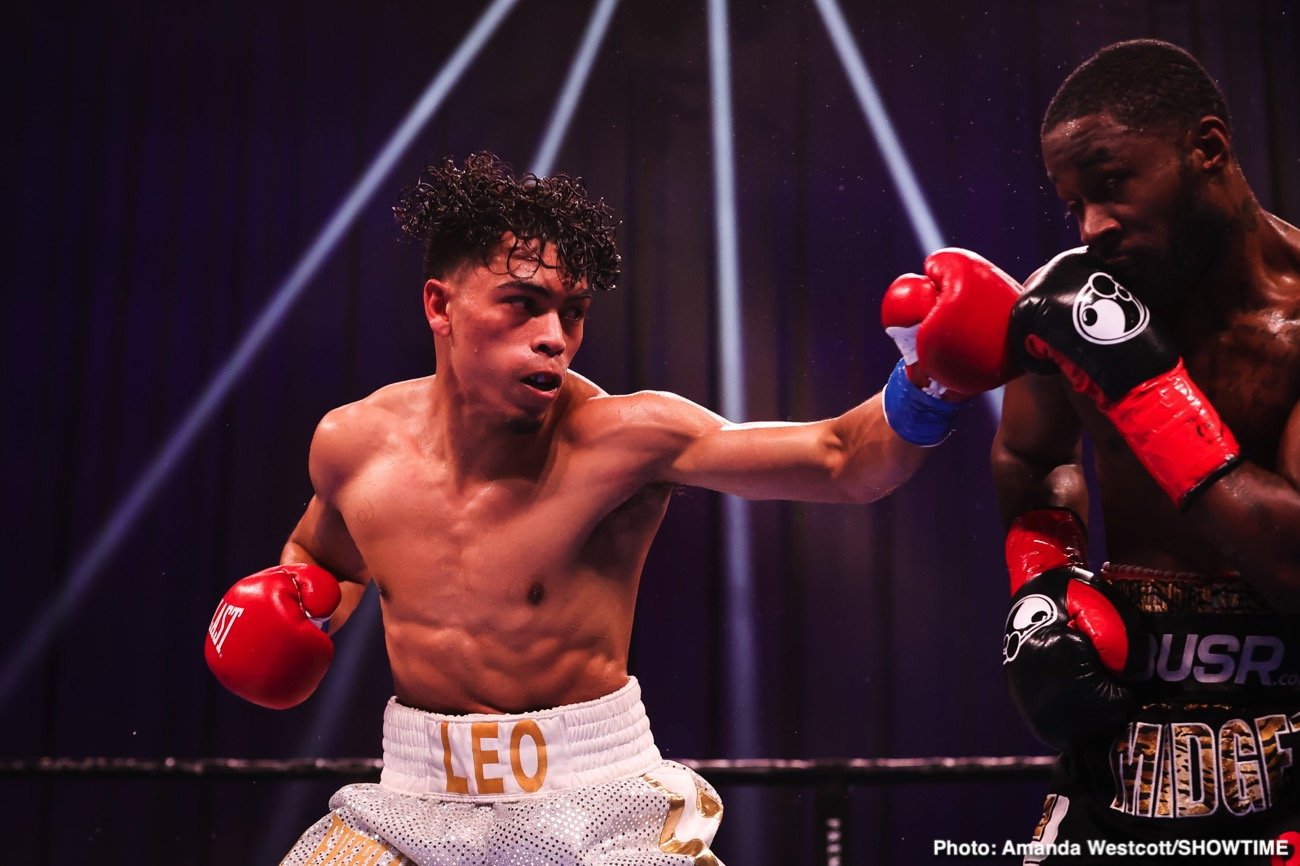 Leo (20-0, 9 KOs), who was originally scheduled to face Stephen Fulton, Jr. in the main event of Saturday’s card presented by Premier Boxing Champions before Fulton tested positive for COVID-19, used a dominant body attack and consistent pressure to overwhelm Williams (19-1, 6 KOs), who stepped up from the co-main event to face Leo. Albuquerque’s Leo had a 248-196 edge in punches landed while landing 39 percent of his power punches. 102 of his 248 connects were body punches.

Leo, who was ranked WBO’s No. 2 junior featherweight going into the fight, is now expected to defend his title against Fulton, ranked No. 1 by the WBO, within the next 180 days.

“It still hasn’t sunk in yet, it just feels surreal,” said Leo. “The first few rounds I was just feeling him out, getting his timing, getting the feel of him. I felt him kind of loosening up and breaking down, and that’s when I started putting the pressure on him a little more.

“That was the key factor in this fight, the body work and the pressure. I’m pretty sure Albuquerque is celebrating tonight. I think they have four world champions, because you can’t exclude Holly Holm. You have Johnny [Tapia], Danny [Romero], Holly and now me. There’s four champions in that city and I think I’ve made history there.”

Fulton, who watched the fight on television while quarantining following his positive test, was interviewed following the fight by SHOWTIME host Brian Custer.

“Congratulations to Leo, he did it,” said the Philadelphia native. “But listen, I’m ready for him. I’ve been ready. Just be ready to face me when it’s time. That’s all I’ve got to say.”

In the co-featured bout, a WBA Super Bantamweight Title Eliminator, 122-pound contender Ra’eese Aleem (17-0, 11 KOs) kept his undefeated record intact via TKO over late replacement Marcus Bates (11-2-1, 8 KOs). Aleem was originally scheduled to face Williams before Fulton’s positive test. This was a rematch of a 2018 bout in which Aleem won by unanimous decision.

The 26-year-old Bates suffered an injured right wrist and battled through the pain for several rounds. Prior to the start of the 10th round, Bates’ corner and referee Gary Rosato warned the fighter that the bout was in danger of being stopped. At 2:18 of round 10, Bates grimaced in pain and turned his back on the action, causing the fight to be stopped. Aleem dominated from the opening bell, out-landing Bates 193-86 in total punches, including 71 landed body shots.

With the win, Aleem sets himself up for an opportunity for a 122-pound title fight.

“I would love to fight either the winner of the main event or any current world champion – Akhmadaliev has two of the belts,” said the Las Vegas-based Aleem who was born and raised in Muskegon, Mich. “Brandon Figueroa, Rey Vargas, or the winner of this one. It doesn’t really matter who but I want the strap.

“I didn’t know his hand was hurt, I thought he was just shaking it just to try to get me to look at it and distract me. I didn’t worry about it.”

Joe George KOs Marcos Escudero with a massive uppercut in Round 9. pic.twitter.com/dVdWogdfwe

This time, George left no room for a controversial decision. At 3:00 of round number nine, George caught Escudero with a vicious left uppercut that sent Escudero flat on his back in a candidate for KO of the Year. At the time of the stoppage, George was behind on two of the judges’ scorecards, 79-73 and 77-75, and ahead on one judge’s card, 79-73. Prior to the one-punch KO, George was getting out-landed 127-89 by Escudero, and Escudero held a 2-1 edge in punches thrown.

“I was setting him up with the jab to the body, I had him leaning over a little,” said Houston’s George, who turned 31 on Friday. “I was shooting the right uppercut, some landed and some didn’t. I wanted him to get comfortable and relaxed, and that’s exactly what he did. He was relaxed and I slipped over and just shot it. He gave it to me and I had to take it. It put him down.

“The result is self-explanatory. I don’t have to say nothing. I’m willing to fight whoever next. One fight at a time and I’ll be prepared for whatever’s on the way.”

Saturday’s SHOWTIME CHAMPIONSHIP BOXING telecast, the first of a nine-event television lineup taking place over the next five months, will replay on Monday at 10 p.m. ET/PT on SHOWTIME EXTREME.

The executive producer of SHOWTIME CHAMPIONSHIP BOXING is four-time Emmy award winner David Dinkins, Jr. The director is Bob Dunphy, son of legendary Hall of Famer Don Dunphy. The pair has been guiding this flagship sports series since its inception in 1986. In addition, Raúl Marquez and Alejandro Luna serve as expert analysts in Spanish on Secondary Audio Programming (SAP).

Bilingual and personable, the 34-year-old Mares will provide expert analysis gathered from a future Hall of Famer career that continues after 16 years and has included 11 world title fights (7-3-1). In 2010, Mares established himself as an elite-level fighter with six consecutive wins against world champions over the next two and a half years. He won the IBF bantamweight world title in 2011 and made one successful defense before moving up in weight and winning the WBC super bantamweight (122 pounds) world title in 2012.

“As a fighter, I’ve had memorable fights on SHOWTIME, including earning my fourth world title belt against Jesus Cuellar,” said Mares. “It’s an honor to call the action for fans from the other side of the ring. As an active fighter, I’m looking forward to being part of the return of world championship boxing as a member of the SHOWTIME CHAMPIONSHIP BOXING team, especially calling the two important 122-pound fights, a division I know a lot about.”