Ward doubts Canelo will fight Beterbiev. Canelo can prove Ward and a lot of boxing fans wrong by setting up a fight against him. It would be an easy match for Canelo to make if he wanted to face Beterbiev.

Is Canelo afraid of Beterbiev?

The casual boxing fans think Canelo is heroic in choosing to move up two weight classes to take on a world champion at 175 in Kovalev. What the fans don’t understand is the fact that Canelo has chosen what some feel is the weakest of the champions at 175 in Kovalev, and that he’s not facing the #1 guy in Beterbiev.

Ward states that Canelo and Golden Boy weren’t talking about wanting to face Kovalev when he was still unbeaten or even after he’d suffered two losses. It wasn’t until Kovalev had been beaten three times, and almost knocked out by Anthony Yarde that they showed interest in fighting him. As such, Ward calls the Kovalev fight a “calculated risk” for Canelo Alvarez (52-1-2, 35 Kos).

Ward says that if Canelo chose to fight Beterbiev, who is still in his prime and undefeated, that would be a “stupid” risk, and he’s not going to do that. So in other words, Ward sees Canelo as someone carefully selects his opponents to ensure that he has a very good chance of beating them before he faces them. Beterbiev isn’t someone that Canelo would have a good chance of beating. Therefore, Canelo probably won’t ever fight him.

“No,” said Ward when asked by Fighthype if Canelo should fight Beterbiev if he gets passed Kovalev on November 2. “Listen, the move from Golden Boy and Canelo to fight kovalev right now. You’d didn’t hear them talking about wanting to fight Kovalev when he was undefeated. You didn’t hear them talking about fighting Kovalev when he had one loss. When he had two losses.

It’s hard to disagree with what Ward is saying about Oscar De La Hoya and Canelo never taking a big risk in setting up a fight against Beterbiev. He’s not vulnerable and looking shot. Beterbiev would be a real nightmare for Canelo to deal with, because he’s someone that punches incredibly hard, and he’s fearless. Say what you want about Gennadiy Golovkin being a great fighter, but he fought with a lot of caution in his two fights with Canelo.

GGG talked a good game about fighting in the “Mexican style”, but when it came to the fights, he didn’t fight that way against Canelo. Golovkin clearly was worried about getting countered by Canelo on the inside, which is why he stayed at a distance throwing jabs and single punches. In the second fight, it was Canelo who surprised the boxing world by coming forward to attack Golovkin. Beterbiev is a different story. He’s not afraid to fight on the inside, and better than Canelo in close. There’s no question. Beterbiev is able to generate huge power with his short punches at close range.

It’s unclear how Beterbiev can get so much power on his shots at such short range. He shouldn’t be able to, but he can. Beterbiev being a lethal inside fighter, and having no fear of attacking his opponents, it would mean that Canelo would be forced into a war with him right away. It wouldn’t wait until the second half of the contest like with his matches against GGG. Beterbiev would go after Canelo, and ignore his head movement, and work his midsection over. It would likely end with Canelo laid out on the canvas from a body shot knockout.

Beterbiev a tough dude to deal with says Ward

“Good fight. Hats off for both fighters in taking the risk, because they don’t want that type of tough fight, even for the winner,” said Ward about Beterbiev facing Gvozdyk. “That’s kind of how I thought the fight was going to go. I’ve seen Gvozdyk during certain moments during fights and not respond when he’s attacked. He responded tonight until he couldn’t respond. Hats off to Beterbiev. He’s a physical dude. A lot of punching power, but just physically strong. He’s a tough dude to deal with at 175,” said Ward.

Gvozdyk (17-1, 14 KOs) fought hard, but he started breaking down in round 9 when Beterbiev focused his attention to throwing body shots. Before that round, Beterbiev was throwing more head shots than body shots. He switched it up in the 9th and went downstairs with repeatedly shots to Gvozdyk’s midsection. The shots rendered Gvozdyk nearly nearly defenseless in the closing seconds of the round.

Gvozdyk called a timeout after one of the body shots. That was shocking to see, and even more shocking that the referee Gary Rosato gave it to him. The referee was having a bad night at the office. He blew a call in the 1st round in initially giving Beterbiev credit for a knockdown on was a slip by Gvozdyk. Although the referee waived off the knockdown after the round was over, it was still bad that he blew the call.

“My daddy was thinking about me having a life after being, and that’s why he put me with a coach that taught me how to hit and not get hit,” said Ward. “So that I could still talk to you when my career is over. I’m chilling, man. I’m enjoying being behind the mic. I’m thankful for what I did,” said Ward.

It’s got to be hard for Ward to continually say no to the boxing media, and the fans when they ask him if he wants to come back to the sport. He would likely make more money from a single fight against someone like Anthony Joshua than he’s made his entire career. For Ward not to want to return to the ring, it’s got to be tough. For the average person breaking their back in jobs that don’t pay a lot, it’s hard for them to relate to Ward not wanting to take a risk in order to make huge money. All the money Ward could make, he would live well. 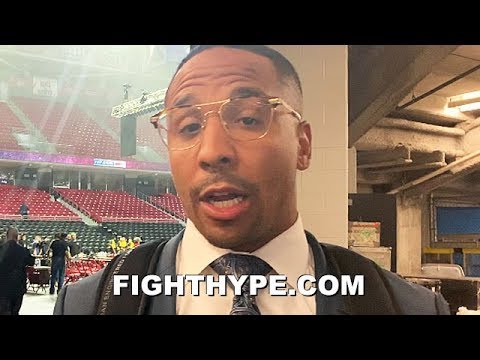