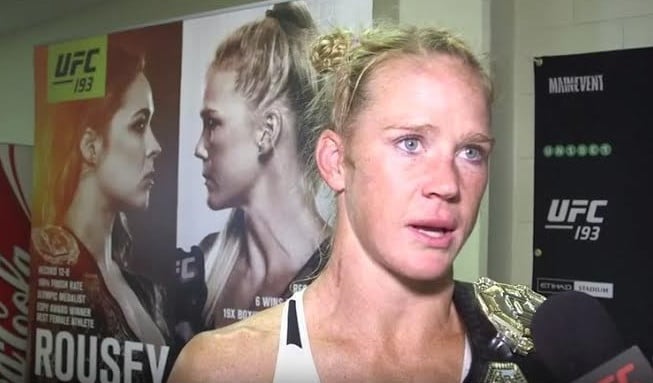 I’ll admit that I don’t typically watch women’s boxing, and it is seldom available on any cable subscription package in Canada. However, I watched 2 Canadian women with the Pan Am Gold a few months back and used to watch Christy Martin on Don King undercards. I had never seen you box while you were boxing, and though I’d heard her name, I watched my first videos of you as a mixed martial artist.

Holly, you demonstrated in your fights prior to last night’s MMA bout with Ronda Rousey a good sense of ring space and how to use it effectively. More importantly, you demonstrated an effective use of the southpaw position that, while seldom mentioned in MMA discussion, is a key combative variable in boxing.

At the same time, when I watched matches from your boxing days, you didn’t seem as comfortable with your movement (yet) as you had in her boxing days. As a mixed martial artist, I presume the key ingredient for you and your team to move her along professionally at the right pace to ensure that when the title fight with Rousey eventually happened, you would be ready. It’s also not uncommon to see a fighter bring out their greatest performances when appearing on the biggest stage. Last night’s pay per view audience likely exceeded 1 million viewers – unprecedented for a female headlined combat sporting event.

Let me take this moment to congratulate you, Holly, the UFC Bantamweight champion of the World. I saw interview discussing what you strive for as a mixed martial artist, and I give you all the credit you deserve. You retired from boxing under three years ago while you were still the pound for pound queen. You’re a kickboxing champion. You also demonstrated in your upset victory over Ronda Rousey, the Olympic medal winning Judoka, your elite level submission defence along with your ability to take down the famed grappler. If Rousey represented the pinnacle of this sport, you just raised the bar higher.

At the same time, you represented not only your home city of Albuquerque proudly, but the boxing community as well. You demonstrated again, in this bout, your ability to control the ring space, take advantage of your southpaw position, and to strike cleanly with the straight left hands down the middle (with the occasional right hook) in order to set up the highlight reel roundhouse kick to the head that Rousey had told everyone on Jimmy Fallon wasn’t going to happen. Brilliant.

I remember when in 2009, James Toney stepped into the Octagon to “represent boxing” on the MMA stage. Toney was over 60 pounds above his best weight and over a decade past his prime. His opponent: 2 time UFC Light Heavyweight Champion and 3 time Heavyweight Champion Randy Couture in a battle of fading veterans. Randy shot at the “shoelaces”, Toney was taken down and submitted. MMA fans looked at it as a triumph. Boxing fans were embarrassed by who was representing us.
Holly, while representing yourself and Alberquerque, you represented the boxing community as well who have, for years, often subjected to scorn and distain by the mixed martial arts community due to their perception that an elite level boxer could never make the transition and succeed at MMA’s highest level.

Read:  What If: Gerry Cooney Had Had More Fights Going Into His Challenge Of Larry Holmes?

Thank you from the boxing community for representing us Holly. We are all very proud of you.