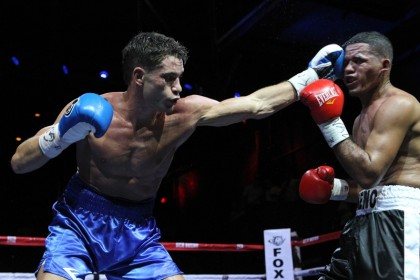 “It was a tremendous night for our fans in Huntington who once again displayed their tremendous support of our events with our tenth straight knockout at The Paramount,” said Joe DeGuardia of Star Boxing.

“Algieri continues to show why he’s one of the best junior welterweight prospects in boxing and Clottey looked like the former world champion that he is. We expect big opportunities ahead for both fighters in the near future.”

Headlining the event, Algieri improved to 18-0-0 with eight knockouts with a dominant performance against battle tested Nicaraguan Wilfredo Acuna, 14-13-0 (11KO’s) culminating in a seventh round stoppage.

Known as the “Pride of Huntington”, Algieri’s huge legion of fans filled The Paramount on boxing’s biggest night of the year. The win was the third of his 2013 campaign.

Making his highly anticipated return following a two-year absence, Clottey improved to 37-4-0 (22KO’s) with a shut out ten round unanimous decision over Southern California veteranDashon Johnson, 14-13-3 (5KO’s), in their junior middleweight clash. Scores were 100-89 twice and 99-90.

Clottey is looking to re-enter the ring against a top-ten opponent before the end of the year toward another run at a world title.

Kevin Rooney trained heavyweight prospect Constantin Bejenaru improved his record to 4-0-0 (2KO’s) with a four round unanimous decision over Buffalo, New York’s Excell Holmes, 2-2-1 (1KO). Scores were 40-36 twice and 40-35 as fans at The Paramount came away very impressed by the heavy-handed Bejenaru.

Opening the action, junior middleweight newcomer Wendy Toussaint of Huntington returned to The Paramount, winning his second professional bout with a four round decision over pro debuting Koree Boyd by scores of 39-37 on all three judges score cards. Fan favorite Toussaint is now 2-0-0.

Following the action in the ring, boxing fans were also treated to the LIVE telecast of the Junior Middleweight World Title Championship between Floyd “Money” Mayweather and Saul “Canelo” Alvarez from the MGM Grand in Las Vegas. 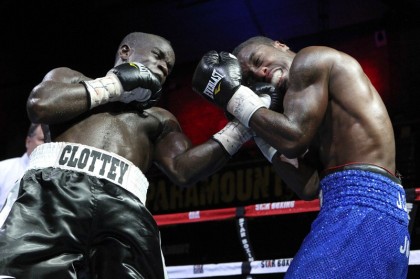 Fans in attendance enjoyed live fights, great ambiance and were treated to the Floyd Mayweather win over Canelo Alvarez on the screens. Former New York Yankee Jim Leyrich and former popular Heavyweight banger Gerry Cooney were among those in enjoying the festivities. As one fan commented: “this is like having the best party you can imagine–drinks, girls, music, and fantastic company. Its the best.” Once again Star Boxing and the Paramount showed why it is the best boxing venue and atmosphere in the USA.